VATICAN CITY (RNS) — New testimony in the Vatican’s massive corruption trial on Tuesday (May 31) shed light on rivalries in the Roman Curia and the role officials close to Pope Francis played in brokering the costly real estate deal at the heart of the proceeding.

Fabrizio Tirabassi, who formerly handled investments at the Vatican’s Secretariat of State, testified to the Vatican tribunal that the decision to invest roughly $200 million Vatican funds into a luxury London apartment complex was made “abruptly and unjustifiably.”

This is the second time Tirabassi has testified before the Vatican court. At the most recent hearing he was questioned by prosecutors about an earlier deal that the Secretariat considered for investment: an oil rig in Angola that, Tirabassi pointed out, starkly contradicted Francis’ environmental concerns, expressed in his so-called “green encyclical,” Laudato Si.

Under questioning for seven hours on Tuesday, Tirabassi touched on the turf wars that take place within the Curia, especially between the powerful Secretariat of State and the Secretariat for the Economy, created by Francis in 2014 to spearhead his financial reforms.

Tirabassi confirmed other defendants’ testimony that Giuseppe Milanese, a friend of Francis since his time as a bishop in Argentina, introduced the main players in the real estate deal. He said that when Milanese, who is not among the defendants, was introduced in the secretariat he was portrayed as having a “privileged relationship with the Holy Father.”

Milanese knew both Torzi and Mincione when they were involved in the securitization of Catholic hospital debts. 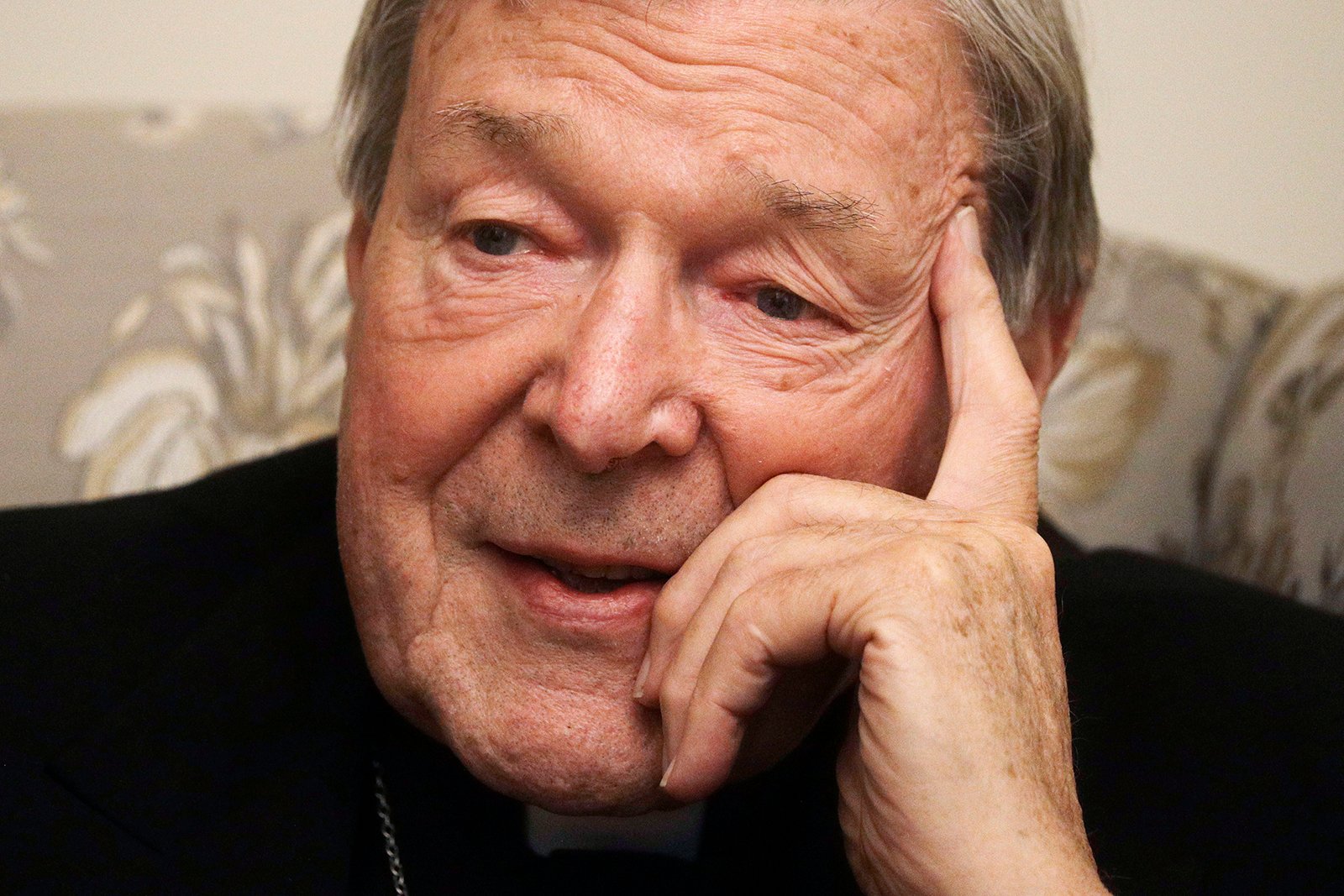 Cardinal George Pell answers a journalist’s question during an interview with The Associated Press inside his residence near the Vatican in Rome on Nov. 30, 2020. (AP Photo/Gregorio Borgia)

At the time of the investment in the London property, in 2014, Australian Cardinal George Pell was appointed to head the Secretariat for the Economy to work alongside the Vatican auditor Libero Milone.

But Milone was unceremoniously ousted from the Vatican in 2017 following accusations that he had spied on members of the Curia. In public interviews, he has blamed Cardinal Angelo Becciu for his firing. Becciu, who is one of the 10 accused in the current trial and formerly the third-highest ranking official in the church, is also often said to have had a hand in charges being brought against Pell in 2017 in Australia for sexual abuse.

Eventually found innocent on appeal in 2020, Pell claims the Secretariat of State, where Becciu was the deputy chief, may have played a role in triggering the charges.

Becciu has vehemently denied that he had anything to do with Pell’s legal tribulations and has told the tribunal that Francis approved Milone’s removal. 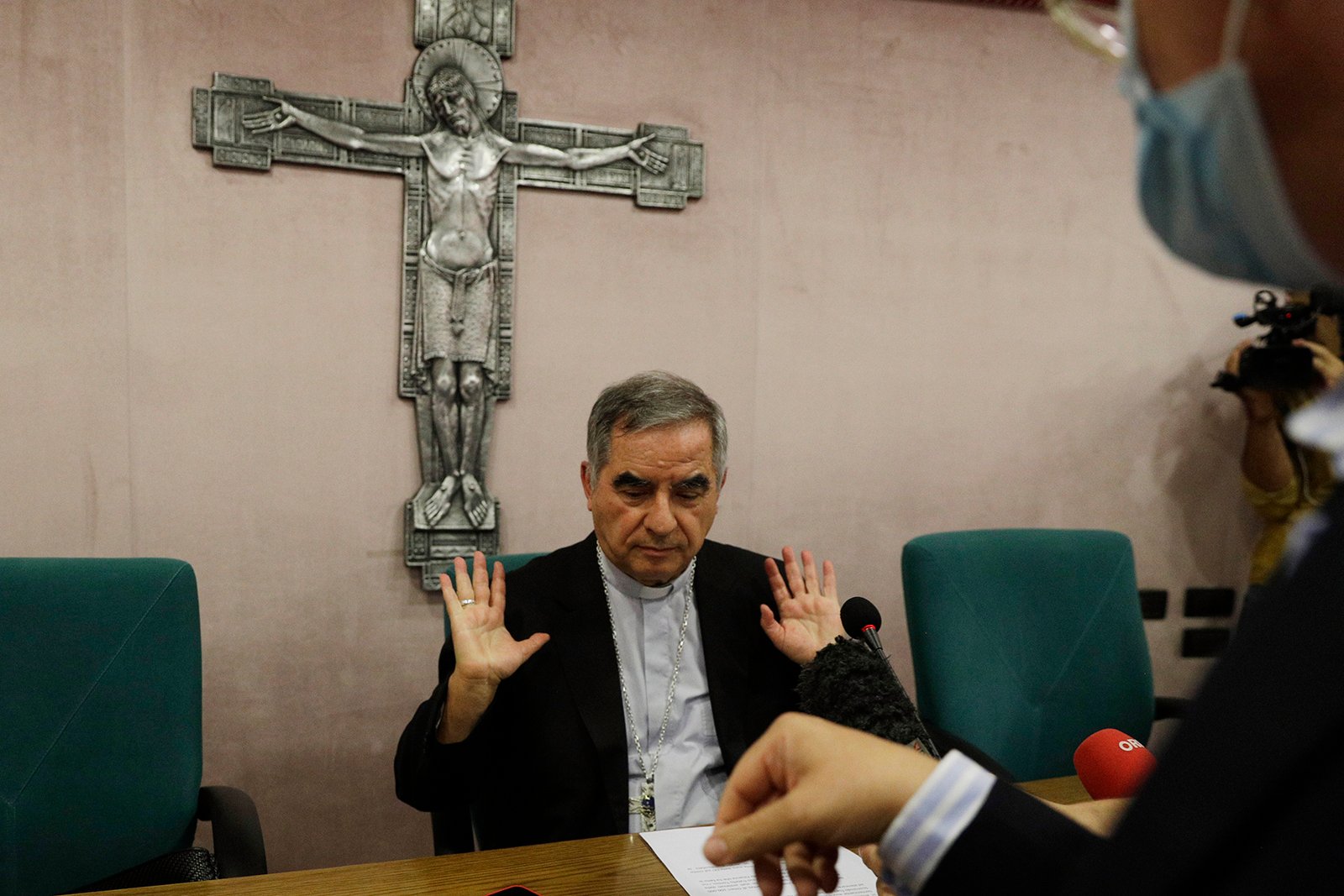 Cardinal Angelo Becciu talks to journalists during a news conference in Rome, in this Sept. 25, 2020, file photo. (AP Photo/Gregorio Borgia)

Vatican prosecutors pointed to evidence that they claimed showed that Milone had requested a review of the London deal and that Pell has asked for explanations concerning the Secretariat of State’s involvement in the investment, accusing the office of “a failure to communicate.”

In a document presented to the court by prosecutors, Tirabassi seemed to criticize the interference of the Secretariat for the Economy into the financial dealings of the Secretariat of State, which he believed violated Vatican law at the time.

But Tirabassi defended the investment in the London property. “The Holy See has always invested in real estate,” he said, adding that this practice was often made by a Vatican agency called the Administrative Patrimony of the Holy See, or APSA. He said that in the past the secretariat of state purchased properties for foreign embassies.

Pope Francis stripped the Secretariat of State of its finances in December 2020 and centralized the Vatican’s economy and investments within APSA.

The Vatican sought to invest in the London property in 2014 when it made a deal with Italian financier Raffaele Mincione, who owned the real estate through a fund. In 2016, when the investment began to lose significant amounts of money, the Vatican attempted to gain full ownership of the London real estate. The Vatican reached out to another Italian businessman, Gianluigi Torzi, to aid them in the process of becoming the sole owners of the property.

Torzi ended up signing an agreement with Vatican officials, including Tirabassi, in London in November 2018 but retained ownership of 1,000 voting shares allowing him to have final say on the property.

Tirabassi testified that he did not know that the shares that Torzi kept for himself gave him ultimate control of the real estate.

The next trial date is set for July 6 when the court will hear Mincione’s testimony.

A previous version of this article stated that Libero Milone resigned from his Vatican post in 2016. The article was updated to state that he resigned in 2017.