(RNS) — Residents of Israel and Gaza dodged a bullet on Sunday (May 29) — in fact a slew of bullets, and bombs and missiles.

Sunday was “Jerusalem Day,” an annual celebration that commemorates Israel’s capture of the Holy City during the 1967 Six-Day War. As in past years, it included a parade through the Holy City’s Arab Quarter, which this year had drawn fierce threats of terroristic attacks from Hamas, the militant Palestinian group that governs Gaza, which, had they been carried out, would have incurred retaliation from Israel.

Thankfully, the group proved to be only grumbling. As usual, some local clashes between marchers and Arab Quarter residents broke out but no large-scale violence erupted.

RELATED: The wisdom of millenniums gave us the Status Quo Agreement in Jerusalem

All the same, the parade was, as it always has been, misguided, dangerous and decidedly un-Jewish.

I am a Haredi Jew (often, and distastefully to me, referred to as “ultra” Orthodox), and I rejoice in the fact that Jerusalem is in Jewish hands. I rejoice that the Western Wall, Judaism’s holiest site, where the ancient Jewish temples stood and toward which Jews worldwide have faced in prayer over millennia, is today accessible to all.

During the 19th and early 20th centuries, under Ottoman rule and then the British mandate, Jewish worshippers at the wall risked assaults, and animal dung was regularly dumped there. Between 1948 and 1967, when the city was under Jordanian control, half of the Old City’s 58 synagogues were demolished and the Jewish cemetery on the Mount of Olives was plundered and its tombstones used as paving stones.

Jews, needless to say, were denied access to the Western Wall.

For millennia Jews have prayed daily for their people’s return to the Promised Land and its spiritual center, Jerusalem. When the armies of three countries tried to remove Jews from the region for the second time in the Six-Day War, and were vanquished, we cried in joy.

Even having returned to our ancestral land, we are required to be sensitive to other faiths and peoples. We pray daily for the return of the central temple to the site where it originally stood. But that return, according to the Jewish religious tradition, is in God’s hands, not ours. Until the messiah arrives to usher in a new era of history — when, in Isaiah’s words, “a wolf and a lamb shall graze together” and global peace will reign — we are enjoined to not goad or incite other peoples or religions. 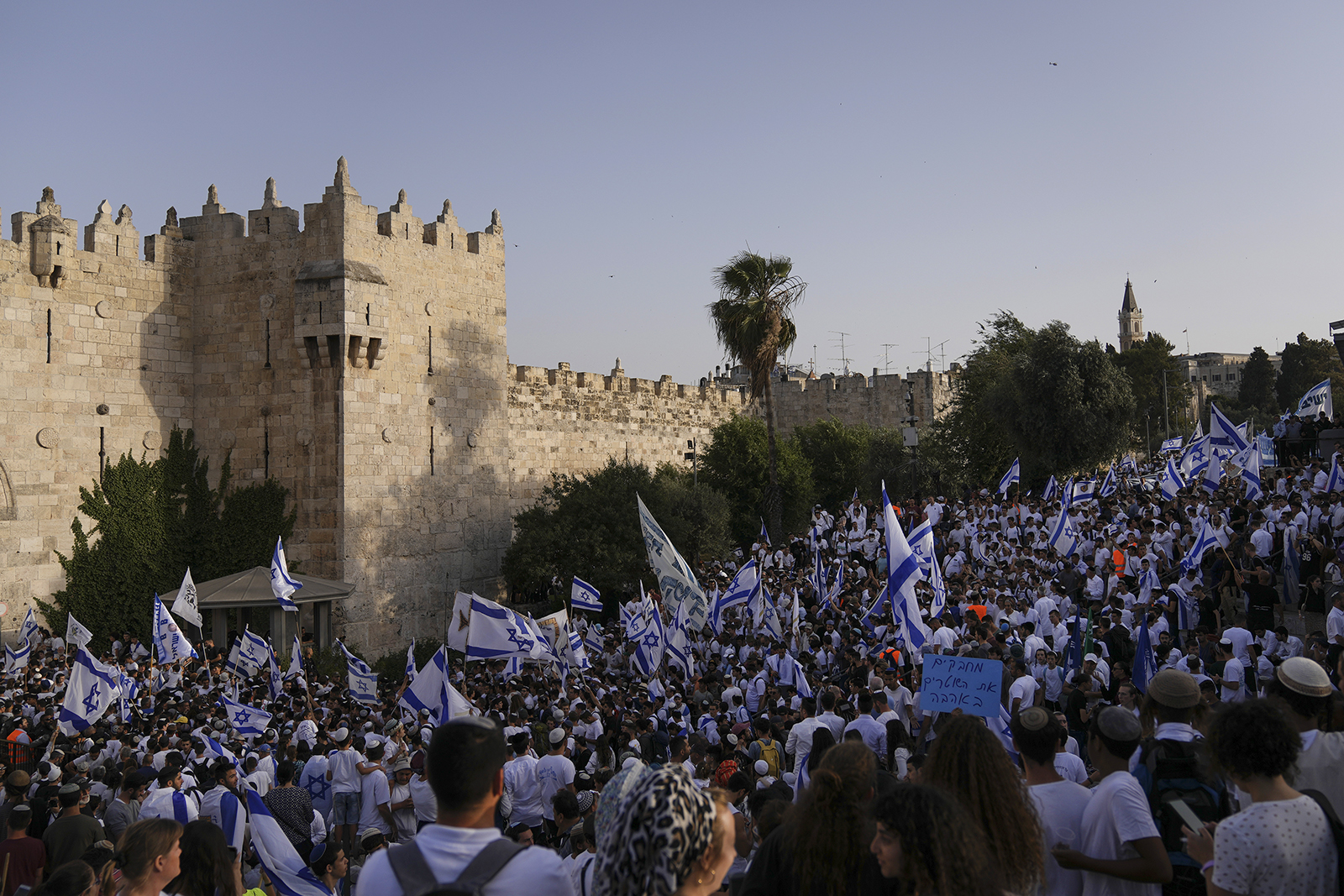 Israelis wave national flags in front of the Damascus Gate outside Jerusalem’s Old City to mark Jerusalem Day, an Israeli holiday celebrating the capture of the Old City during the 1967 Six-Day War, May 29, 2022. Israel claims all of Jerusalem as its capital. Palestinians, who seek east Jerusalem as the capital of a future state, see the march as a provocation. Last year, the parade helped trigger an 11-day war between Israel and Gaza militants. (AP Photo/Ariel Schalit)

And so a baldly nationalistic march — especially through the Arab Quarter of the Old City — was no way to mark the happy fact that Jerusalem and the Western Wall are today open to people of all faiths. It was, simply put, a provocation.

The day before the march, Rabbi Gershon Edelstein, one of the most revered leaders of the Haredi community, reportedly asked Haredi members of the Israeli Parliament if they truly “don’t understand that (the march) is unnecessary and dangerous.”

He also decried Jews’ visiting the Temple Mount itself, which, in 1967, Israel put under the administrative control of the Jordan-based Islamic trust known as the Waqf. Since then only Islamic worship has been permitted on the Mount, in order to preserve and promote peace.

At the time, Israel reasoned that to alter the religious character of the place, where the Dome of the Rock shrine — one of the holiest places in Islam — and the Al-Aqsa Mosque stand, would be a gross affront to the Muslim world. It was a decision born not of weakness but of wisdom, even if the peace it meant to foster remains an elusive entity.

Peace has been elusive for many reasons, including Arab states’ rejection, for many years, of Israel’s legitimacy. But there has been much progress in that area of late. Today, the main obstacles to peace are groups like Hamas and Hezbollah, which are sworn to murder Israelis and destroy their country, and those Palestinians in the Israel-occupied West Bank who swoon to these groups’ hateful siren call.

But Israel only pushes peace further out of reach when it indulges Jewish nationalists by allowing incendiary actions that insult the feelings of Israel’s Arab residents and of all who sympathize with them. Like the Jerusalem Day parade.

Some will point to the scuffles that broke out as celebrants made their way into the narrow streets of the Muslim Quarter, arguing that both sides threw invective and glass bottles at each other, requiring the intervention of Israeli police. The march itself, however, even if it had proceeded peacefully, was an unnecessary invitation for resentment.

RELATED: Poll: White evangelical support for Israel higher than any other Christian group

And to what end? To assert Israeli sovereignty in the face of Arabs? That may reflect a militant nationalistic stance. But not a Jewish one.

Before the next Jerusalem Day, Israel should examine the true meaning of the event, which is to express our gratitude for being able to live and worship freely in Jerusalem. A truly Jewish Jerusalem Day would foster heartfelt gatherings in places where no one will be angered or affronted. Next year Israel should redirect its citizens’ feelings from provocative demonstrations to a Jewish celebration of a city whose name is rooted in the Hebrew word shalom, “peace.”

(Rabbi Avi Shafran, who serves as director of public affairs for Agudath Israel of America, a national Orthodox Jewish organization, writes widely in Jewish and general media. The views expressed in this commentary do not necessarily reflect those of Religion News Service.)