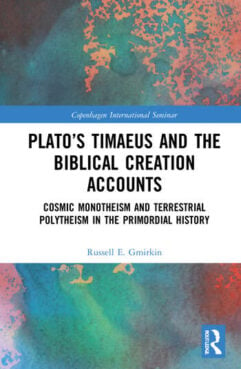 NEW YORK/LONDON — A groundbreaking new book from Routledge by noted biblical scholar Russell Gmirkin proposes that the Jewish notion of a cosmic, eternal God of Creation first appeared in Genesis 1 around 270 BCE, drawing on the account of the creation of the kosmos in Plato’s Timaeus. This new book builds on earlier research by Gmirkin, who has argued that the five books of Moses were written around 270 BCE at Alexandria, Egypt, utilizing various Greek sources found at the Great Library, including the writings of Plato. In Plato’s Timaeus and the Biblical Creation Accounts: Cosmic Monotheism and Terrestrial Polytheism in the Primordial History, Gmirkin argues:

Russell Gmirkin, a biblical scholar and lecturer living in Portland, Oregon, has written extensively on the biblical use of Greek sources from the Great Library of Alexandria. In his 2006 book Berossus and Genesis, Manetho and Exodus, Gmirkin presented evidence that the Books of Moses were written by Jewish scholars around 270 BCE at the Great Library of Alexandria in Egypt, using various Greek historical sources found there. Gmirkin’s 2017 book, Plato and the Creation of the Hebrew Bible, identified Plato’s writings as the most important of these Greek sources and the inspiration for Jewish monotheism, theocracy, and divine laws. This book was the first to systematically compare biblical, Greek and Ancient Near Eastern laws, showing that the Mosaic laws and constitution often most closely resemble those of Athens and that of Plato’s Laws in particular.

Additional information about Plato’s Timaeus and the Biblical Creation Accounts is available at RussellGmirkin.com and Routledge.com/Platos-Timaeus-and-the-Biblical-Creation-Accounts-Cosmic-Monotheism. To schedule an interview with author Russell Gmirkin, email at [email protected] (best) or call 503/442-5007.