IQALUIT, Canada (RNS) — Pope Francis wrapped up his journey of reconciliation with the Indigenous peoples of Canada by visiting the island city of Iqaluit, a historic Inuit fishing ground, where he apologized for the cultural assimilation that took place in Catholic-run residential schools.

“Today, too, in this place, I want to tell you how very sorry I am and to ask for forgiveness for the evil perpetrated by not a few Catholics who contributed to the policies of cultural assimilation and enfranchisement in those schools,” the pope said on Friday (July 29).

In the frozen tundra of the far-north city, Francis quoted the testimonies of the local elders who compared the colonization of their territories to a spring that never came. “Winter fell on everything,” Francis told the crowd gathered at the Nakasuk Elementary School.

In Francis’ six-day journey through the massive country (July 24-29), he experienced a range of contrasts: from the urban struggles and Indigenous landscapes of Edmonton to the dwindling Catholic community of Quebec City. Iqaluit, a city separated from the country by the Hudson Bay and nearer to Greenland than most of Canada, has the nation’s highest percentage of Inuit people and was the last stop on the pope’s “penitential pilgrimage” before he returns to Rome.

Pope Francis spoke to members of the Inuit community, some of them former students at residential schools, praising their care for the environment while encouraging young people not to be discouraged by hardships and opposition.

“There is a beautiful relationship between you and this land you inhabit, because it, too, is strong and resilient and responds with brilliant light to the darkness that enshrouds it for most of the year,” he said. “Yet this land, like every individual and every people, is also fragile, and needs to be cared for.” 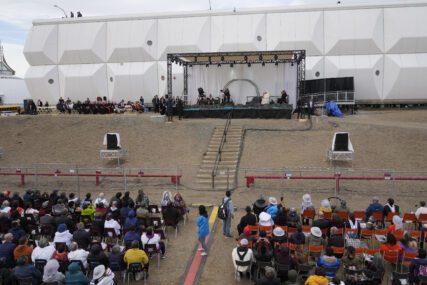 In his speech, Pope Francis did not mention the clergy sexual abuse that occurred in residential schools in the northern region of Nunavut. Inuit representatives from Iqaluit visited Pope Francis at the Vatican in March to share their stories and invite him to their land.

At the Vatican, Inuit representatives asked the pope to intervene in the extradition of the Rev. Johannes Rivoire, who currently lives in France but is accused of sexually abusing Inuit children when he administered in northern Canada.

The pope did focus on encouraging the young community in Iqaluit, which has a younger median age compared to other areas in Canada. He urged young people not to “spend their days in isolation, hostage to a cell phone!” but to come together and take action.

“Don’t think that life’s great dreams are as unattainable as the sky above,” he said.

“You were made to fly, to embrace the courage of truth and the beauty of justice,” he continued. “To sow seeds of peace and loving care wherever you are; to ignite the enthusiasm of those all around you; to keep pressing forward and not to flatten everything out.”

The pope spoke of forces that “drag us down, kill our desires, and lessen our joy,” but he reminded young people that in Christ they may find a non-judgmental ally who cherishes their individuality and freedom.

“So never lose hope, fight, give it your all, and you will not be sorry,” he said.

“Set the navigator of your lives on a great destination: upwards!”