CHARLOTTE, N.C. (RNS) — At a seminar for schoolteachers on teaching the Holocaust, instructor Donna Tarney rolled through a list of antisemitic tropes about Jews throughout history.

In the Middle Ages, Jews were accused of poisoning wells and using human blood to make matzo.

In the early 20th century, automaker Henry Ford claimed Jews caused World War I, the outbreak of “thieving and robbery” — even, he said, the inefficiency of the U.S. Navy.

She then turned to face the class: “Space lasers started the California wildfires. Who said that?”

The teachers all chimed in: “Marjorie Taylor Greene!”

They were referring to the Georgia congresswoman who suggested last year that the 2018 California wildfires were ignited by a space laser controlled by a corporate cabal, including the Rothschild banking firm.

Such connections between past and present are being made at seminars offered to public and private school teachers across the United States and abroad by The Olga Lengyel Institute for Holocaust Studies and Human Rights, or TOLI.

Olga Lengyel was a Hungarian Jew who survived the Auschwitz death camp and eventually made her way to New York City, where she organized a library and art collection devoted to the Holocaust. After her death in 2001, Lengyel’s friends created TOLI, which hosted its first seminar for teachers in 2006.

Its mission is to educate middle- and high-school teachers in how the systematic murder of European Jews could have happened and how misinformation campaigns can metastasize into human rights violations, the destruction of democratic norms, even genocide.

“The TOLI program looks at how the Weimar Republic devolved into a dictatorship,” said Tarney, a former Catholic school teacher with a master’s degree in religious education who now co-leads the program in Charlotte, one of the 20 seminars TOLI will run this year. “There are lessons we can learn about how to protect democracy. We can teach teachers about the importance of democratic ideas and how to identify when things are sliding.”

American schoolteachers are feeling increasing pressure from new standards, mostly driven by partisan politics, that govern how they teach already sensitive topics such as race, diversity and LGBTQ issues. Florida has banned teachers from discussing racism as an integral part of American history as well as discussion of sexual orientation and gender identity in early grades. Pen America keeps a list of nearly 1,600 books recently banned from school libraries.

Holocaust education appears to have escaped such scrutiny. Some 23 states mandate that their students learn the history of the Holocaust. Stephen Criswell, center, speaks about Native American history during a seminar hosted by The Olga Lengyel Institute for Holocaust Studies and Human Rights, or TOLI, in Charlotte, North Carolina, in late July 2022. Photo courtesy of TOLI

Many teachers say, however, that they are ill-equipped to teach about the Holocaust in a meaningful way. TOLI grounds teachers in the history of the genocide and offers parallels with other mass injustices. In Charlotte, teachers spent a day learning about the Catawba Nation, many of whose members were driven off their ancestral lands in South Carolina, North Carolina and parts of Virginia.

TOLI’s director, Deborah Lauter, a lawyer who until recently led New York City’s Office for the Prevention of Hate Crimes, said Holocaust education is often perfunctory — a series of facts or a memoir of an individual writer. “In ninth grade world history, my teacher put up a picture of Hitler on a screen and turned and pointed at me, and said, ‘Deborah, you’re a Jew. Tell the class about the Holocaust.’”

TOLI doesn’t offer its own Holocaust curriculum, but rather guides teachers toward resources, strategies, materials and ideas for use in their own classrooms. It calls its method “inquiry-based learning” intended to get students to raise questions and think critically on their own.

At a Thursday morning seminar on the campus of Charlotte’s Queens University last month, Tarney began her lecture with a question she says teachers always ask: Why did Hitler hate the Jews?

She began by examining passages from John’s Gospel to explain the rivalry between Christianity and Judaism in the first century; sped through the fourth century, when Christianity became the official religion of the Roman Empire; and moved on to the Crusades of the 11th and 12th centuries, in which marauding Christian missionaries killed between 2 million and 6 million people, including an untold number of Jews, on their way to recapturing Jerusalem from Muslim rule.

Finally, she explored incarnations of antisemitism in early 20th century America, including Ford, and the Rev. Charles Coughlin, a Catholic priest who used his weekly radio broadcasts in the 1930s to blame the Jews for Nazi violence.

Teachers were then given time to write their personal reflections or prepare lesson plans. 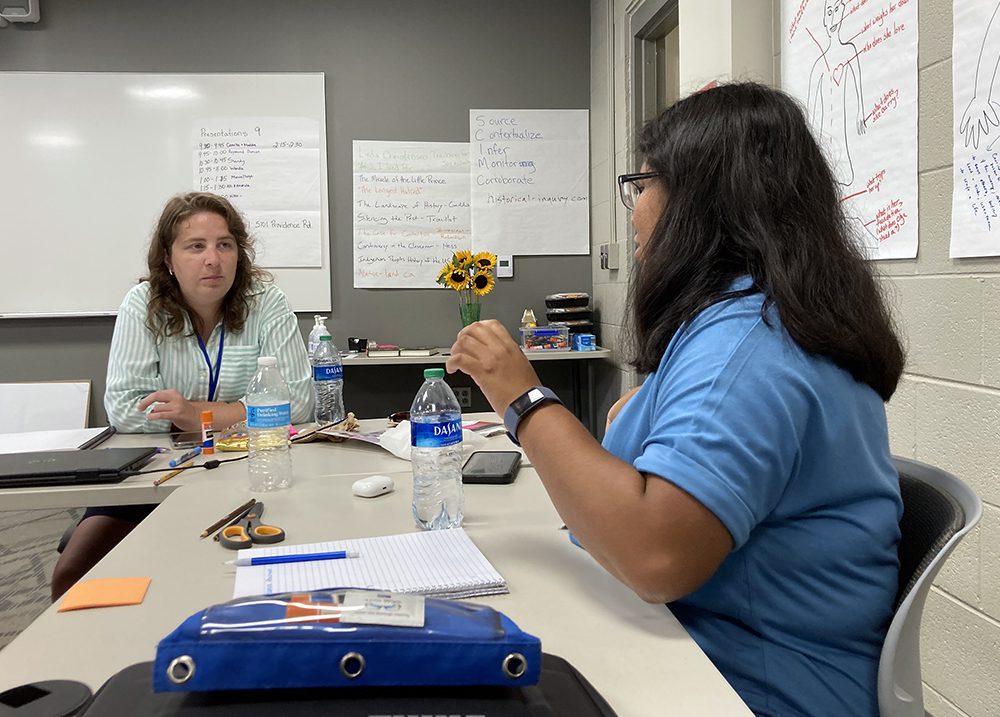 “My students think they know everything,” said Ott. “They’ll say, ‘I know who Anne Frank was. I know who Hitler was.’ But they don’t know ‘why Jews?’ I think it’s important to give as much background as you can — the extra stuff — to flesh out the story.”

The 10 teachers participating in the Charlotte seminar came from North Carolina, South Carolina, Florida, Georgia, Maryland, Wisconsin and Texas. None was Jewish.

Patricia Hatch, an English teacher at the private Davidson Green School, in Davidson, North Carolina, said she’s wanted to more confidently address difficult issues in her class. In her last job, at an evangelical Christian school, she switched from teaching Shakespeare’s “Romeo and Juliet” to teaching “Othello” because the title character is a Moor, considered of African origin — allowing her to address race.

“I was looking for professional development and the title mentioned the Holocaust but also human rights and social justice,” said Hatch. “I thought, ‘Oooh, I could use all of that in general for my own confidence in addressing difficult subjects. I really want to address these subjects but feel unequipped to do so.”

Wanda West, a special education teacher from Perryton, Texas, a small town where 95% of her students are Hispanic with immigrant parents, said she has compared the treatment of Jews during the Holocaust to the ways undocumented immigrants have sometimes been treated.

Those parallels, she said, remind her of the reason she’s a teacher to begin with — to form and shape the next generation to be moral agents.

“I want the kids to know that this was a human thing, not an act of God,” said West. “I don’t want them to be a go-along. I hope I can help them think, ‘What’s the right thing here?’ I want my kids to be upstanders.”