(RNS) — I try to avoid mentioning I’m a pastor when I meet new people because the conversations immediately get weird. I experienced one such awkward turn while on vacation with my family and sharing a pool with a woman in her 70s doing water aerobics. After learning about my profession she began lamenting the absence of her grandchildren in church before pivoting to her hope of a political candidate reclaiming America for God.

In Luke’s account of the announcement and birth of John the Baptist, the angel Gabriel told John’s father, Zechariah, the message being given through John would “turn the hearts of the fathers toward their children.” When John began preaching and preparing people to behold Jesus he told those with two coats to give to the ones who had none and to do the same with their food. He referred to this work as a way of “producing fruit in keeping with repentance.” The First Nations Version of the New Testament says, “When the people heard these words, they began to have hope.”

I can’t say I was shocked when I heard the backlash toward the news of last week’s announcement of the forgiveness of student loan debt.

I was raised in a tradition that praised the virtue of neighbors caring for neighbors — and believed they could do so in ways the federal government couldn’t possibly replicate. It was in that spirit that the church where I serve launched an initiative in 2020 called the Equitable Healing Reparations Initiative. The aim of the work was to pay off student loan debt for Black therapists in order to chip away at disparities that exist in mental health access and care as well as an expanding wealth gap between Black and white Americans.

I had recently heard Jemar Tisby lecture on his book “The Color of Compromise: The Truth About the American Church’s Complicity in Racism.” During the lecture he elaborated on some of the realities that challenge Black representation and access to mental health care and the need for repair in systems perpetuating those challenges. He also suggested financial reparations as a way for dominant culture American churches to repent for the inequities their institutions helped create and sustain.

Putting those ideas together, we created our initiative and over the last two years more than 100 people from 12 states (and one fine Canadian) have given more than $84,000 to the payment of loan debt for Black therapists. Our small, low budget church has also committed to giving monthly to the repair of these broken systems and has given $18,000 to the initiative —putting the total at just over $100,000. One therapist’s loan debt was completely paid and we’re on the way to paying off another’s. We are also nearing the launch of a Black-led foundation that will continue and expand this work.

One unexpected fruit of this effort was that younger people — many who had left the church or Christianity altogether — were filled with hope at the thought of a church moving in financial repentance toward a more equitable society. Hearts of grandparents, fathers and mothers were waking up to the difficult realities of a younger generation of students. Several people in their 20s and 30s told me it was the first time they felt good about giving money to a church. Fruit grew because of repentance.

If your reason for opposition to last week’s debt relief program is because it is coming from the federal government, I’d like to offer this method as a way for you to enter into the work of proclaiming a kingdom where there is no debt and everyone is prepared to flourish. If you think the best way for this to happen is for neighbors to care for neighbors, why not have your church begin paying off loan debt for neighbors who have been crushed by predatory lending and unsustainable costs of continuing education?

I don’t know if my children will believe what I believe about Jesus, but I’m convinced that if they do it will have more to do with institutional repentance than institutional certainty. I think that was the key element John the Baptist was offering to those who gathered around him and began to have hope.

The woman in the pool with me that day truly wanted her children and grandchildren to experience a God who knew them and loved them. She ached for them to desire that love, but the systems she had invested time and money into weren’t compelling them toward her vision for their world.

Jesus spoke these words when rebuking those who considered themselves children of the light who sought security and comfort in their money and possessions: “The children of this world are more shrewd in dealing with their own generation than are the children of the light.” Last week, the United States government offered a more hopeful gospel proclamation to those under the weight of debt than has been offered by much of what is called the church.

For as long as I can remember I’ve heard older Christians call for revival. For them, revival meant those who don’t believe coming into agreement with us and our institutions. I have yet to see such an event take place, but I wonder … what if all the money aimed at territorial expansion and church planting was aimed instead at debt relief and racial justice? 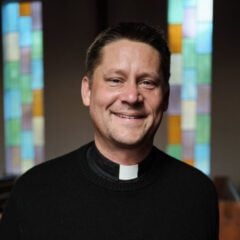 Could such an act fill people with hope and prepare hearts for the just reconciliation offered in the body of Jesus?

(Danny Bryant serves as the priest of St. Mary of Bethany Parish in Nashville, Tennessee. The views expressed in this commentary do not necessarily reflect those of Religion News Service.)