LOMBARD, Illinois (RNS) — Everyone would have understood if Bishop Paula E. Clark had stepped away from her call to lead the Episcopal Diocese of Chicago, said her fellow bishop, Mariann Edgar Budde of Washington, D.C.

Just weeks before she was set to take office in April 2021, Clark experienced a brain bleed while exercising. Surgery followed, postponing her consecration to June, then to August, then indefinitely as she worked through speech, physical and occupational therapies.

As Clark regained her health, her husband, Andrew McLean, was diagnosed with multiple myeloma and died in November.

“Paula never once wavered — not once,” said Budde in a sermon at the worship service celebrating Clark’s ordination and consecration as bishop on Saturday (Sept. 17) at the Westin Chicago Lombard Hotel in this Chicago suburb.

Clark is the first female and first Black bishop to lead the Chicago diocese.

On Sunday, she will take her seat in the chair, called a cathedra, symbolic of her position, at a worship service at St. James Cathedral in Chicago.

“The process of confirming a new Bishop in the Diocese of Chicago has been long, challenging, sometimes heartbreaking, but always guided by God,” Clark wrote in a letter of welcome to those who attended her ordination. 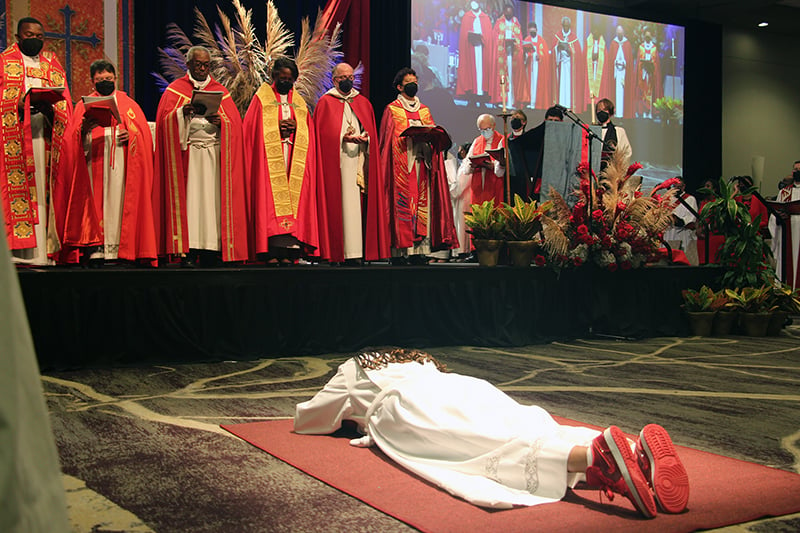 Bishop Paula Clark prostrates herself during her ordination service at the Westin Chicago Lombard in suburban Lombard, Illinois, on Sept. 17, 2022. RNS photo by Emily McFarlan Miller

“I would like to thank the Episcopal Diocese of Chicago for your steadfast loyalty and faith. You have believed in me, prayed for, comforted, and encouraged me even through difficult times. You have held fast to your faith and showed me what God-centered leadership really is. Most of all, you have kept the faith and overcome, despite repeated setbacks.”

Curry and the Rev. Anne B. Jolly, president of the Diocese of Chicago’s standing committee, had said repeatedly they expected Clark to eventually serve as bishop.

Budde never doubted it, either, she said.

“Being in the presence of Paula Clark and watching her in action is like taking a master class in Christian leadership. That was true before all that transpired in the last 18 months, and it is even more so now,” Budde said in her sermon.

A native of Washington, D.C., Clark previously served as canon to the ordinary and chief of staff under Budde in the Diocese of Washington. She pursued the priesthood after the death of her mother, who did not approve of women’s ordination. 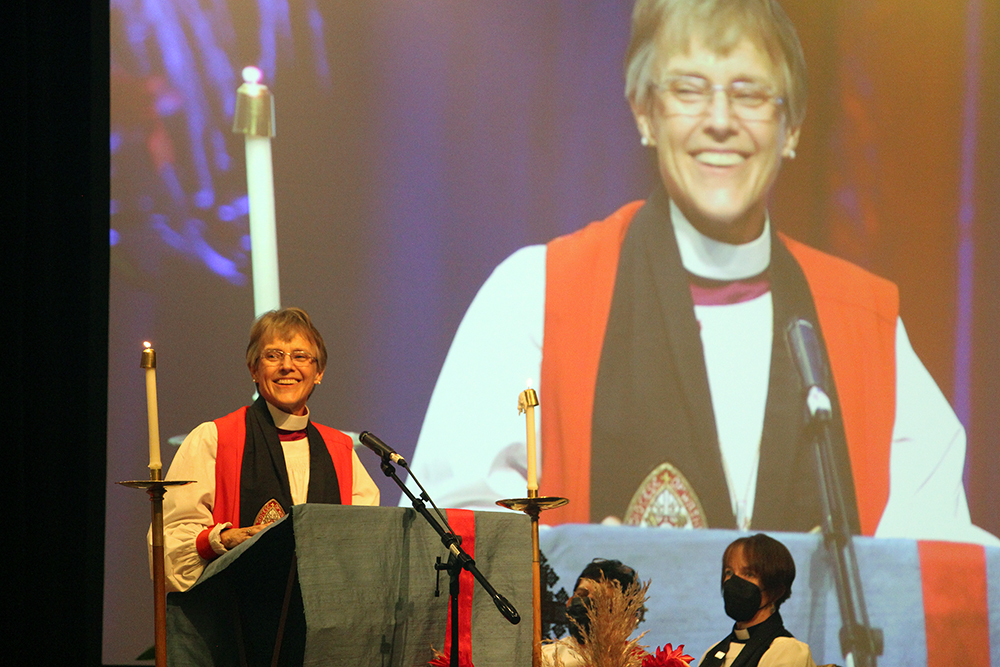 Bishop Mariann Edgar Budde of the Episcopal Diocese of Washington speaks at the ordination of Bishop Paula Clark of the Diocese of Chicago on Sept. 17, 2022, at the Westin Chicago Lombard in suburban Lombard, Illinois. RNS photo by Emily McFarlan Miller

But the Diocese of Chicago, Clark said after her election, “really captured my heart.” The diocese includes 122 congregations and more than 31,000 baptized members in northern and west-central Illinois.

But Lee recalled Clark’s election in December in a statement on the diocese website, saying, “Even as we peered through our Zoom screens at one another, navigating the unfamiliar territory of a virtual bishop election, your sense that she was called to serve with you — that the Holy Spirit was drawing you together — was palpable.”

“It was a joyful occasion.”

Saturday’s service also was full of joy — a quality Clark brings to everything she does, Budde said.

The Diamano Dancers and Drummers performed a West African dance called lamba as they processed into the service alongside Episcopal, ecumenical and interfaith clergy from across the Chicago diocese and beyond.

More than 20 clergy had followed Clark from Washington, D.C., where she is “much beloved,” said Canon Anne-Marie Jeffery of the Diocese of Washington.

They wanted to show a “tangible representation of our love” for the new bishop as she leads the diocese — where, Coleman pointed out, the Union of Black Episcopalians’ first president, the Rt. Rev. Quintin Ebenezer Primo, Jr., once served as suffragan bishop.

“She (Clark) overcame and is an example for us, so it’s a very proud moment,” Coleman said.

Many clergy danced and clapped as they processed, their smiles clear even under face masks. 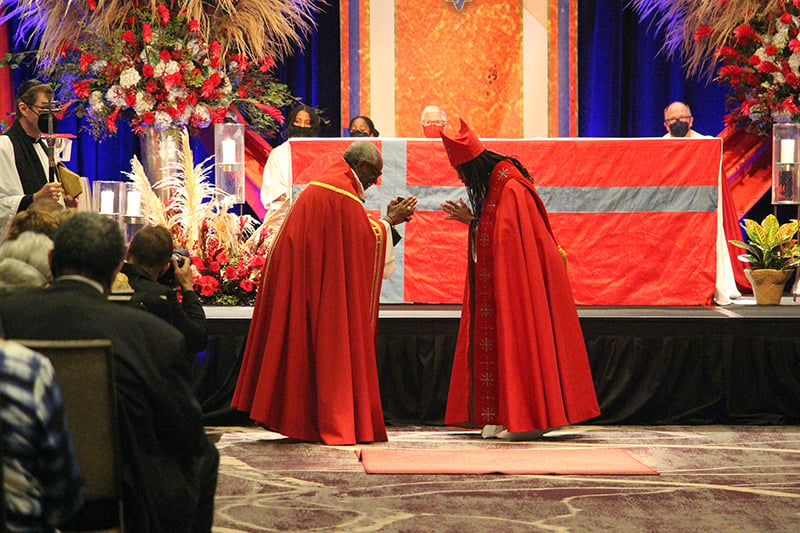 Presiding Bishop Michael Curry of the Episcopal Church, left, and Bishop Paula Clark of the Episcopal Diocese of Chicago gesture to each other at Clark’s ordination on Sept. 17, 2022, at the Westin Chicago Lombard in suburban Lombard, Illinois. RNS photo by Emily McFarlan Miller

After all that had happened in the last two years, after the vestments were placed over Clark’s shoulders, after she had led the recitation of a confession of faith and presided over Communion, the new bishop lifted her hands.

She clapped along with the song she had chosen for the choir to sing at that moment: “(Lord) you are the source of my strength / You are the strength of my life / I lift my hands in total praise to you.”

Clark appeared to wipe tears from her eyes as the ordination service ended in prayer.

“Thanks be to God,” the people responded, following the order of service.

Then, impromptu: “We have a bishop!”