(RNS) — A new NBC News/Telemundo poll focusing on the Latino electorate found that 41% of Latinos who do not currently claim Catholicism as their religion said they had previously been Catholic.

Jonathan Calvillo, an assistant professor of Latinx studies at Emory’s Candler School of Theology, said the flip side of that statistic is just as important: the growing number of non-Catholic Latinos who were never Catholic to begin with (58%).

Some were raised Protestant, of course, but increasingly, he said, many are raised nonreligious.

While Calvillo said there are some who go from being Protestant to being Catholic, it’s a smaller percentage than the larger number of those who leave the Catholic Church. “But it does exist,” he said.

The poll, which consisted of interviews with 1,000 Latino registered voters, found that 48% identified as Catholic, 25% as Protestant, 1% as Muslim, 1% as Jewish and 18% said they didn’t identify with a religion.

The nationwide survey, conducted Sept. 17–26 in English and Spanish, queried respondents on a number of political issues in the run-up to the 2022 midterm elections. Overall, the survey found that while Democrats lead Republicans by more than 20 points among Latino voters, that number is down from past NBC/Telemundo over-samples of Latino voters. The lead, for example, was by 26 points in October 2020 and by 42 points eight years prior to that in October 2012, according to NBC News. 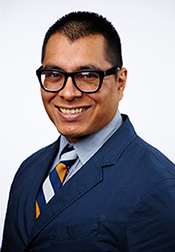 Those who stand outside of the Catholic Church, by birth on one hand or by choice on the other, likely move toward opposite poles on the political spectrum, said Calvillo, whose research has focused on how religious affiliation influences ethnic identities among Latinos.

The poll found that 67% of those who identified with a religion said their religious beliefs only played a minor role or did not impact how they vote in elections, while 33% said it was a major or single most important factor.

However, a 2020 analysis from the Public Religion Research Institute argued that religion is the “largest demographic divider” among U.S. Latinos and found that Latino Protestants were more conservative, Republican and supportive of Trump than Latinos who are Catholic or religiously unaffiliated.

They were divided on President Joe Biden, with 51% saying they approved his job performance and 45% disapproving, according to the poll.

Additionally, a PRRI survey conducted right after the announcement of the Dobbs decision, which overturned Roe, found that among Latino Catholics, 75% say abortion should be legal in most or all cases, a big jump from the 51% who said so in 2010.