VATICAN CITY (RNS) — Pope Francis will canonize a 19th-century bishop known as “the father of migrants” on Sunday (Oct. 9), sending a message to Catholic leaders of the importance the pontiff places on the care of refugees at a time when immigration is roiling politics, including in the Italian government at the Vatican’s doorstep.

Giovanni Battista Scalabrini, bishop of the northern Italian city of Piacenza from 1876 to 1905, lived at a time of mass migrations in Europe brought by economic, industrial and scientific changes that led millions to seek a new life in the Americas. Scalabrini’s advocacy for immigrants created the foundation for the church’s pastoral approach to migration today.

“The Holy Father introduces us to a bishop who was capable of not just fully and capably managing his diocese, but was able to look beyond,” said the Rev. Graziano Battistella, who shepherded Scalabrini’s cause for sainthood, at a press conference Thursday (Oct. 6).

“With this canonization, I think the Holy Father wants to offer the church a model to imitate,” Battisella said. “A model for bishops, a model for the church.”

Born in Como, Italy, in 1839, Scalabrini was appointed bishop at the age of 36, as millions of Italians were fleeing their homeland for Brazil, Argentina and the United States, leaving behind their families, their culture and their faith. In 1887 he founded the Missionaries of St. Charles Borromeo and later the Missionary Sisters of St. Charles.

Migration was viewed negatively at the time, but Scalabrini took a different approach, seeing the upheaval as a chance to ease socio-economic tensions at home while promoting cultural encounter and jumpstarting progress. But he warned that, without the proper laws and protections in place, migration could strip people of their roots and make them prey to human traffickers. 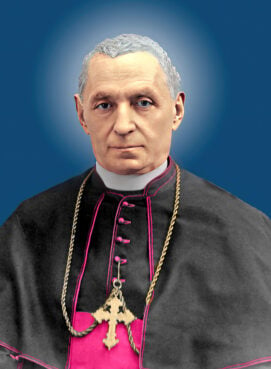 Unlike many of his contemporaries, Scalabrini believed migration is not only “a sacred human right” but a basic fact of human existence.

According to Sister Neusa de Fatima Mariano, the superior of the Missionary Sisters of St. Charles, “The answers that Scalabrini offered to the phenomenon of migration anticipated modern times.”

The bishop was especially sensitive to the role women religious play in helping migrants and the sisters now run over 100 missions in the world catering especially to women and children. The Scalabrinian Secular Missionary Women, founded in Switzerland in 1961, and other lay groups live out the bishop’s teachings in small local communities.

The Missionaries of St. Charles Borromeo, also known as the Scalabrinian Fathers, operate parishes, hospitals and welcoming centers in 33 countries. The Rev. Leonir Chiarello, superior general of the order, said that the missionaries champion the rights of migrants at borders and other critical places around the world.

“Pope Francis is sending a clear and solemn message to the church and humanity as a whole: The migrants, who first moved him and urged him to action, remain a central theme for the church and society,” said Chiarello.

Francis’ first trip outside the Vatican after being made pontiff in 2013 was to the Italian Island of Lampedusa, where thousands of migrants are stranded in their journey across the Mediterranean Sea. Since then, the issue of migration has been a focus of his speeches, advocacy and foreign trips.

Francis waived the requirement for a second miracle attributed to Scalabrini, who was beatified by Pope John Paul II in 1997.

Speaking on Oct. 6 to the Vatican department in charge of making saints, Francis underlined the role of rank-and-file Catholics in determining saints. Sainthood, the pope said, “doesn’t come primarily from the hierarchy but from the faithful.”

That spirit of Scalabrini’s vision continues today, speakers at the press conference pointed out, in the more than 50 welcoming centers for migrants in South America. Similar centers work to integrate immigrants in Italy, a first destination for many seeking to enter Europe.

RELATED: People of faith should vote their values. They should be poll workers to save democracy.

Giulia Civitelli, a member of the Scalabrinian Secular Women who oversees an outpatient clinic at Rome’s busy train station, told reporters at the press conference, “Together we can discover ourselves belonging to a single human family.”