(RNS) — The Hindu epic Mahabharata tells the story of a warrior, born as a female named Shikhandini, who seeks to avenge a dishonor in her past life. To do so, she transforms into a male, taking the name Shikhandin. Shikhandin causes the fall of the great warrior Bhishma, who had taken oath not to fight a woman or one who had been a woman.

Shikhandin is not the only transgender hero of the Mahabharata. Arjuna, a key warrior, takes on the appearance of a beautiful woman in order to live incognito in exile.

Indian philosophy, said Lavanya Vemsani, a scholar specializing in Indian history and religions, has long considered the soul beyond gender identity. The supreme being from whom the universe emerged, Brahman, appears in the ancient sacred writings known as the Vedas, without gender. Innumerable mythological stories affirm that a person can choose to embrace the male or female form, depending on the circumstances.

When the country’s Supreme Court handed down its landmark 2014 ruling recognizing transgender Indians as a third gender separate from males and females, declaring that all persons have the constitutional right to self-identify their gender, the judges were in a sense affirming ideas about gender that had circulated in India for thousands of years.

The court’s rulings were aimed primarily at hijras, a broad demographic that includes transgender, transsexual and intersex communities, who were once widely accepted, as gender fluidity was throughout South Asia.

But public attitudes toward transgender people have been slow to change, still hewing to European ideas about sexuality introduced by 19th-century British colonial rulers. This foreign elite dramatically altered the prevailing cultural understanding of gender, attaching considerable stigma and discrimination to the transgender community that continues today.

It took four years after its 2014 ruling for the high court to scrap a colonial-era law that criminalized gay sex. A year after that, India’s Parliament passed a law protecting transgender rights. But hijras are still India’s most socially excluded group.

The hijras’ fortunes began to fall in the 1830s, according to research by Jessica Hinchy, a historian at Nanyang Technological University in Singapore. Before then, hijras had received patronage from the Mughals, Muslim rulers who controlled large parts of South Asia for more than 300 years, and from the Marathas — Hindu kings who ruled much of central India. 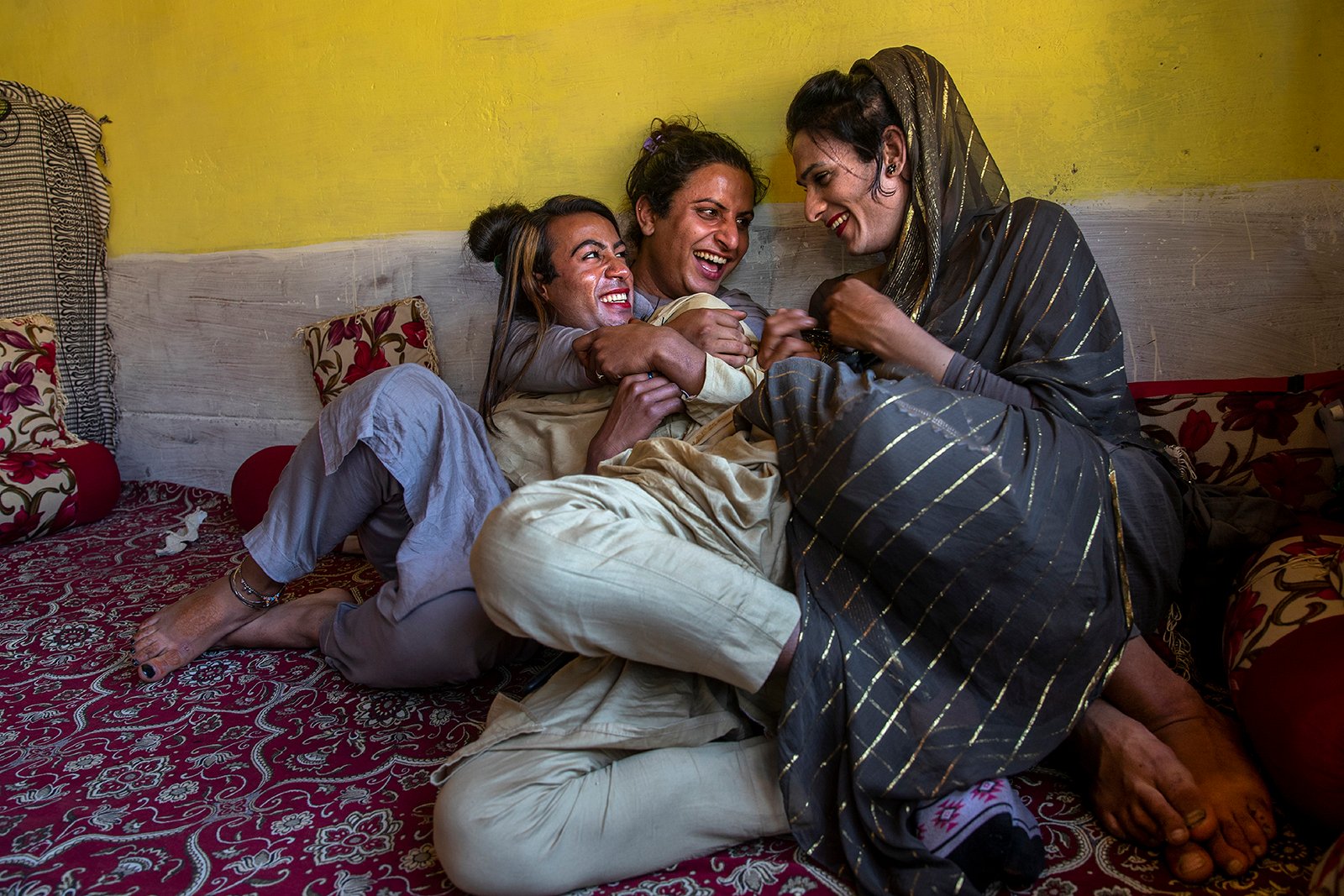 Khushi Mir, left, a transgender Kashmiri, relaxes with friends after a meeting of community members in the outskirts of Srinagar, Indian-controlled Kashmir, on June 4, 2021. Mir and four others created a volunteer group to distribute food. They provided ration kits for hundreds of people, many of them makeup artists, singers and matchmakers who have lost their livelihoods during the pandemic. (AP Photo/Dar Yasin)

In the 18th century, in northern India, hijras would be invited to perform for noble and royal women. Another transgender community, the Khwaja sara, who live mainly in today’s Pakistan, were employed as guards, military commanders, high-ranking state officials or even as spies or tax collectors. “Hijras were generally of humble status but deserving of the patronage of state and performance culturally valued,” said Hinchy.

From the 1830s onward, as Hinchy found in her research, in some regions of British India hijras began to be seen as “ungovernable and a threat,” she said. Public nuisance laws enacted in the 1850s allowed policing of transgender and other marginalized people in “respectable spaces.” More concerted campaigns, which had the support of elite Indians, called for “extinction or for hijras to die out,” Hinchy said.

Section 377 of the Indian Penal Code, the law undone in 2018, was introduced in 1861. Reflecting Victorian morality, it designated gay sex as “unnatural offences” and “carnal intercourse against the order of nature,” said Anjali Gopalan, executive director of the Naz Foundation Trust, a nonprofit that first challenged the law in court in 2001.

These oppressive laws and customs have left a lasting impact. Hijras today mostly live on the fringes of society, earning their livelihood through sex work or by performing blessings at weddings and the birth of a child. More broadly, all transgender communities suffer stigma and discrimination. Suicide is disproportionately common among transgender Indians and children who are trans often drop out of school due to bullying. Often families are the first ones to shun their own transgender members. “Just because laws change does not mean attitudes will change,” said Gopalan.

COVID-19 lockdowns further worsened the situation of transgender people, especially sex workers, as many of them lost their livelihoods. Falling back on their families was not an option for many. Aruvi, a transgender person in Hyderabad, started a “transkitchen” with the help of three friends from the queer community, who cooked food and delivered it to the hijra community and other marginalized groups. “Hunger was a big killer,” said Aruvi, “as there weren’t many resources for cheap and free food.”

Despite Hinduism’s numerous accounts of gods with male and female attributes, Vemsani said, the conservative values held by many Hindus today “have very little to do with India’s ancient tradition.”

It’s not that the stories of the gods’ gender fluidity are suppressed. In one of his forms, the prominent god Shiva is joined with his consort, Parvati, and depicted as the half-male and half-female Ardhnarishwara. In the Hindu tradition of Vaishnava, the deity Lakshminarayan is a composite form of Vishnu and his female consort, Lakshmi.

The deity Ayyappa, worshipped mostly in southern India, is believed to be the result of the union between Shiva and Vishnu that took place when Vishnu took on the form of an enchantress, Mohini, to save the world from a demon.

These tales live side by side with the legacy of European sexual morality. “Colonization left a huge damage psychologically, morally and emotionally,” said Jeffery D. Long, a professor of religion and Asian studies at Elizabethtown College in Pennsylvania. “So much knowledge has been erased or distorted. It may be time to rediscover and understand the lost past.”

Today’s Hindus need look no further than the saint Basavanna, a legendary devotee of Shiva, who rejected the limitations of gender in a devotional poem written in the 12th century: “Look here, dear fellow, I wear these men’s clothes only for you,” it reads. “Sometimes I am man, sometimes I am woman.”

Donate Now!
Posted in
FaithHinduismLGBTQ Belief and Belonging Around the WorldNewsWorld

Religion Hub
In India, deity decorating a calling for Hindu temple artist
Follow us on Facebook!
Submit your photos to RNS