(RNS) — Two months ago, I stood in Providence Baptist Church in Monrovia, Liberia, listening to the stories of Africans and Americans — the latter freed from slavery in the United States — who had banded together to establish the first republic on the continent of Africa two centuries before.

Providence, the oldest Baptist church in the West African country and the second oldest on the continent, was founded in 1822 by the Rev. Lott Carey, who had come as a missionary to the fledgling country and had brought a team of African American settlers home. Now, 200 years later, the Rev. Emmett L. Dunn, CEO of the Lott Carey Foreign Mission Convention, had brought a team of African Americans home.

I have traveled to several countries in Africa, and each one is imprinted on my heart in a special way. But hearing the stories of the African American settlers was cause to pause. I connected with the history of Liberia in a way I didn’t expect. I felt blessed beyond measure.

Landing in Liberia my spirit leaped like the baby in Elizabeth’s belly when greeting Mary, the mother of Jesus. The sights and sounds of Liberia greeted my senses, sending my head and my heart into overwhelming joy. 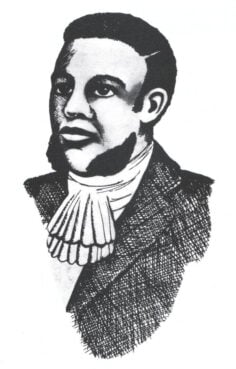 In Liberia, I was at home. Home in the land of my ancestors on World Communion Sunday. Home, where a sense of “double consciousness” —  a concept coined by W.E.B. DuBois to describe African Americans’ sense of dislocation from Africa and ourselves — liberated my thoughts and linked them to my theology in a free-spirited dance of deliverance.

It’s often said we must step back before we step forward. Walking in the footsteps of Lott Carey in the motherland afforded us the opportunity to do just that.

Born enslaved in 1780 in Charles City County, Virginia, Carey became a disciple of Jesus in 1807, purchased his freedom in 1813, and led the first Baptist missionaries to Africa from the United States in 1821.

After settling in Liberia, Carey and his pioneering missionary team engaged in evangelism, education and health care. He served as a missional and civic leader until his death in 1828. 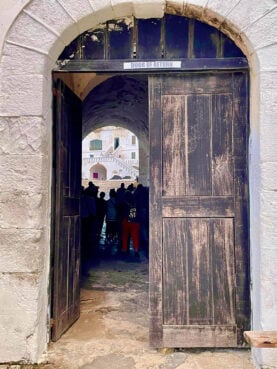 The Door of Return at the Slave Castle in Cape Coast, Ghana. It was once dubbed “The Door of No Return,” signaling the last time enslaved persons would see their homeland. Courtesy photo

Our next stop in Africa took us nearly 1,000 miles east along the coast of the Assin Manso Slave River and the Cape Coast castle in Ghana, unofficially dubbed “the Door of No Return” by our Ghanian sisters and brothers, through which so many of our ancestors were shackled and shipped into the slave trade in the New World. It has become a portal for African Americans, pulling us back to Ghana.

Before walking to the Slave River, where my ancestors received their first bath after being captured and their last bath before being carted off to the Americas, we held a ceremony of protection over Lott Carey’s life. In my sanctified imagination, my African ancestors’ prayers came to fruition in the proclamation made that day. What was meant for evil, God had used for good some 400 years later.

How ironic is it? In a whitewashed slave castle used to destroy the African spirit, a group of spirited African Americans reconnected with a long-lost history, historically whitewashed in American culture and the church universal.

RELATED: We need equity and justice in vaccine distribution. The church can help.

My Bible says, “Be steadfast and persevering, my beloved sisters and brothers, fully engaged in the work of Jesus. You know that your work is not in vain when it is done in Jesus’ name.”

It was in that spirit that the last leg of our journey in homage to Lott Carey ended with saluting our ancestors on the same shores where they passed, returning where no return was promised. In the Twi language of Ghana, “sankofa” is a word meaning “go back and get it.” We did.

(The Rev. Angelita Clifton is president of Women in Service Everywhere and an associate minister at Fountain Baptist Church in Summit, New Jersey. The views expressed in this commentary do not necessarily reflect those of Religion News Service.)