(UNDATED) Two years after Sept. 11, 2001, the question “Why do they hate us?” is once again being earnestly asked across the United States. This time the Muslims are asking it.

Several high profile incidents have taken place over the summer of 2003 to feed into the sense of uncertainty, fear and even developing paranoia in the Muslim community. The latest was that of the burning of a cross outside a mosque in late July.

As crosses go the 3-foot high wooden cross was not big. But the significance of burning it outside the Prince George’s County (Md.) Mosque and Islamic School in the early hours was enormous. A videotape from a surveillance camera on the property showed that there were several white men involved in the cross burning in the early hours of the morning. The FBI spokesman in Baltimore said this was the first cross burning reported to authorities in Maryland in at least three years.

A few days before the cross burning two young Muslim students were shot to death in the same county. In Arizona a Sikh male who may have been mistaken for an Arab because of his beard and turban was shot in Phoenix. In Illinois an explosive devise destroyed a Muslim family’s van. A few weeks earlier in New Bedford, Mass., a pizza deliveryman was kidnapped, beaten and stabbed apparently because his attackers thought he was a Muslim.

Similar incidents are being reported across the land.

The Council on American-Islamic Relations released its eighth Annual Report around the same time as the cross burning on the status of American Muslim civil rights. The report concluded that anti-Muslim incidents had increased by 15 percent over the previous year.

The USA Patriot Act has been regularly challenged for trampling civil rights of Muslims and Arab immigrants. The law intended to fight terrorism is often used to unnecessarily harass Muslims and in far too many cases persecute them with little or no justification.

Muslims have been verbally abused and physically threatened. In one case investigators are looking into what they call a credible claim in which a guard at an immigrant detention facility held a loaded gun to a detainee’s head. In another case Muslim prisoners have presented persuasive evidence that they were taunted because of their religion and possibly forced to eat food Islam prohibits.

These incidents were not seen as either isolated or something that would go away easily. Indeed Muslim leaders were convinced that they were part of the pattern that was emerging in America and that needed to be checked to ensure that the situation did not deteriorate further.

As if to confirm the growing mutual hatred a new poll jointly released by the PEW Forum on Religion and Public Life and PEW Research Center for the People and the Press revealed that an increasing number of Americans have come to view Islam as a religion that encourages violence while a declining number say Islam has a lot in common with their own religion.

The killings and the violence are shocking but not entirely new. What is new is the cross burning. It has enormous implications and not all symbolic. Cross burning and the challenge to it evokes the struggle for American identity and sense of self. It speaks of a hard-won battle for a freer, more tolerant and more democratic society. It reminds us of the great sacrifices made over a generation ago by extraordinary leaders _ from John Kennedy to Martin Luther King Jr.

The burning cross also raises some deep and disturbing questions. It symbolizes hatred. This is the central paradox of the burning cross for the cross is supposed to symbolize Christianity, which by definition carries the message of its founder _ Jesus. Jesus, as Muslims know all too well from the high reverence and affection they have for him, embodies love, compassion and humility. To kill or indulge in violence in Jesus’ name is a gross distortion of his teaching.

For American leaders who are trying desperately to win the hearts and minds of the Muslim world such acts undermine their initiatives and credibility. The symbol of a burning cross at a mosque will play into the hands of those in the Muslim world who are arguing that America is on the war path against Islam itself.

The wars in Afghanistan and Iraq are not quite settled. Soldiers are still losing their lives with sickening regularity. More and more questions are being asked about the long-term strategy and implications. The need for better understanding between Islam and the United States is greater than ever before. In this atmosphere of tension and suspicion a burning cross _ even a 3-foot-high one _ can blaze across the horizon carrying a message of hatred and intolerance.

In this uncertain atmosphere the burning of a cross has an exaggerated importance in the minds of all parties. Americans must sit up and take notice of that burning cross.

Muslims are looking around nervously for a Kennedy or a King in modern day America.

And they are asking: “Why do they hate us?” 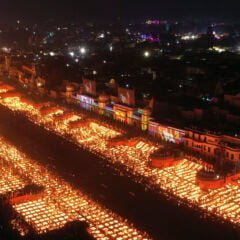 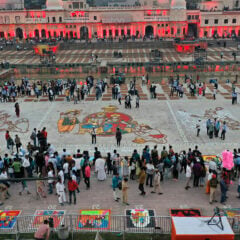 Opinion
Modi’s Diwali extravaganza shows why we need to tell the many stories of Rama
Follow us on Facebook!
Submit your photos to RNS