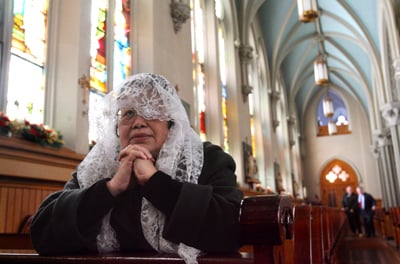 (RNS1-JAN26) A woman named Rosario who didn’t want to give her last name wears a lace veil while praying at a Catholic church in Cleveland. Prior to the Second Vatican Council, most women wore veils to Mass, but the reforms of the Council largely ended the practice. For use with RNS-VATICAN2-50, transmitted Jan. 26, 2009. Religion News Service photo by Lynn Ischay/The Plain Dealer.

(UNDATED) Picture a man heaving a stone into a placid pond, the splash setting off an ever-widening chain of waves.

Fifty years ago, Pope John XXIII unleashed such a wave of change in the still-some would say stagnant-waters of the Roman Catholic Church when he called for a worldwide council of bishops to reform their ancient institution.

On Sunday, Jan. 25, 1959, John-less than three months after becoming pope-proclaimed it was time to drag the church out of the Dark Ages and into the modern world. It was time, he said, to open the stained-glass windows and let in some fresh air.

The proclamation shocked Catholics, who were unused to seeing change in a more than 1,900-year-old patriarchy steeped in tradition. Some were skeptical. Others embraced it.

“I remember being very excited that the bishops were going to meet,” said Sister Christine Schenk, who now leads a liberal reform group, FutureChurch, that draws inspiration from Vatican II’s reformist spirit. “We were wondering what it was all going to mean.”

The council convened in Rome in October 1962. Nearly 3,000 bishops, under John’s guiding hand, went to work on revolutionary changes that would give more freedom to the laity, reach out to non-Catholics and allow congregants to celebrate Mass in their own language, with the priest turned to face them.

“You went from a guy with his back to you, speaking in a language you didn’t understand, to where you were one of the celebrants,” said Schenk. “You went from a spectator to a player. It was all very exciting and new.”

John died in 1963, but Vatican II continued in four sessions through his successor, Pope Paul VI, until it adjourned in 1965, launching more changes over the next 10 years than in the church’s previous 100 years.

“I have very vivid memories of how poorly prepared people were for the changes,” said Bishop Richard Lennon of Cleveland. “Priests were not prepared at all, and as a result it was a pretty haphazard event, a bit unsettling until you got used to it.”

Vatican II opened the gates of social activism, freedom of expression and conscience, and a respect for all religions, proclaiming to put an end to centuries-old prejudices and bad blood toward other Christian denominations.

In Africa, Masses were celebrated with drums; in America, with guitars. Women no longer had to cover their heads in church. And nuns all over the world began shedding their medieval robes and veils.

Vatican II eventually put an end to meatless Fridays and long hours of fasting before receiving Communion. It restored the stature of the Bible, which had taken a back seat to church teachings, and allowed lay people to hand out consecrated Communion wafers, a job only a priest had been allowed to do.

“The fundamental change is the role it gave to lay people,” said the Rev. Lou Trivison, 84, retired pastor of Resurrection Church in Solon, Ohio. “It called on the laity to put their faith into action-to work for peace and unity among ourselves and all Christian churches.

Put more bluntly, “Prior to Vatican II, the laity’s role was to pray, fast and obey,'” Trivison said. “In other words, `Shut up.'”

Indeed, the newly empowered laity did speak up, unleashing a host of hot-button issues that today remain subjects of fierce debate: Ordination of women, marriage for priests, homosexuality and the use of contraception-all, to various degrees, not approved by the church hierarchy.

Most Catholics, both liberal and conservative, support Vatican II, although they may differ in their interpretations of it. And most believe Pope John Paul II, and lately Benedict XVI, slowed the Vatican II movement by issuing conservative decrees and reaffirming Rome’s authority, which to some is a blessing and to others a disappointment.

A small minority of Catholics rejects Vatican II outright, calling it heresy and the work of the devil.

“Pope John called them prophets of doom,” said the Rev. Allan Laubenthal, 74, who was in Rome during Vatican II and now teaches theology part time at St. Mary’s Seminary in Wickliffe, Ohio. “There are a few still around. They crop up now and then.”

The Society of Pius X (SSPX), based near Kansas City, Mo., is a breakaway group flatly opposed to Vatican II. On Saturday (Jan. 24), on the eve of the 50th anniversary of the Council’s call, Benedict welcomed back four SSPX bishops who had been excommunicated 21 years ago for their role in the breakaway group.

The Rev. Markus Heggenberger, an SSPX member who celebrates Mass in the old Latin rite at St. Peregrine Chapel in Westlake, Ohio, opposes Mass in English, the new roles of the laity and efforts to reach out to other religions.

“Who wants to make common cause with Muslims?” he said. “The Catholic Church, I think, is a new religion, a religion of sentimentality as opposed to a religion of the Ten Commandments. Pope John XXIII was a liberal, not consistent with the Catholic faith.”

But it was John’s messages in a time of cultural changes throughout the Western world that attracted millions of Catholics, including the Rev. Donald Cozzens, who teaches religious studies at John Carroll University.

“Vatican II asked, `What is religion all about? Is it about control or about liberation?'” Cozzens said. “Religion is meant to liberate the soul so an individual sees his or her dignity as a child of God.

(Michael O’Malley writes for The Plain Dealer in Cleveland.)