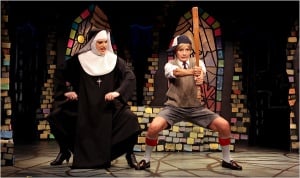 One of the archbishops who will have to wait until the next round, New York’s Timothy Dolan, is on a tear against The New York Times again, this time for stories about a play and an exhibit that Dolan finds offensive (photo from the play, left).

Lots of chatter about Christine “I’m not a witch” O’Donnell’s fumble on whether the separation of church and state is constitutional: Stephen Prothero says pols need a religious literacy test. O’Donnell’s got some company in Republican Dan Severson, who’s running for Minnesota Secretary of State, who says “there’s no such thing” as separation of church and state” because the U.S. is a “Christian nation.”

A federal judge rejected the Obama administration‘s request for a temporary hold on her ruling that gutted Don’t Ask/Don’t Tell policy; the Pentagon is now accepting openly gay candidates for military service … sort of. Openly gay Army Lt. Dan Choi — who famously chained himself to the White House fence to get the policy changed — has already tried to re-enlist.

WaPo profiles James Zogby, the Lebanese Catholic who heads the Arab American Institute (not to be confused with his pollster brother John). The White House has apparently nixed a POTUS visit to India’s famed Sikh Golden Temple because POTUS would be required to wear a head covering that may or may not make him look like a Muslim.

My favorite story of the day: a Presbyterian (PCA) church in North Carolina says two boys can be members of a Cub Scout pack, but the parents can’t be leaders because they’re Mormons and not “real” Christians. And my favorite headline (even tho the story is a little stale at this point), “In excelsis D’oh! Vatican says Simpsons Catholic.”

NPR tracks the “fast fall” of the Crystal Cathedral as it slides into bankruptcy. Speaking of falls, NCR has links to an interesting back-and-forth over why the Catholic Church in the U.S. is losing so many members, and why the hierarchy doesn’t want to talk about it.

A murder trial underway in San Antonio — a devil worshipper who killed a waitress by slitting her throat — seems like it’s ripped from the set of Law & Order. The Pew Forum looks ahead to next week’s SCOTUS arguments on Arizona’s voucher plan that funnels some public money to private schools. Minnesota Gov. Tim Pawlenty wants to have dinner with Jesus, Abraham Lincoln and Mick Jagger.

Archbishop of Canterbury Rowan Williams, still a bit peeved at how B16 unveiled a plan to welcome Anglicans into the Catholic fold, says he hopes a “joint group” (presumably from both sides?) will oversee the implementation. The Orthodox and Catholics can agree on one thing: they disagree on the pope.

German President Christian Wulff can’t seem to catch a break — German Muslims cheered when he said Islam “belongs to Germany,” but was met with silence when he told Turkish lawmakers that Christianity belongs to Turkey. Reuters says Hamburg may be the first German city to make official provisions for its Muslim citizens.

Iran’s supreme leader, Ayatollah Ali Khamenei said there will be no more tolerance for dissent among the country’s Islamic rulers.