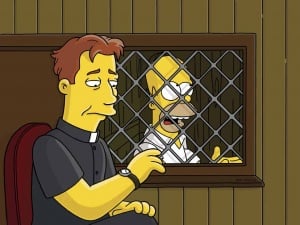 Breaking news: The Vatican priest who raised a few eyebrows by calling Homer Simpson a Catholic is backpedaling, saying “I don’t think that at all. I would say they’re people of faith.” Rev. Lovejoy can call off the vapors.

POTUS has joined the chorus of adults (both gay and straight) telling gay teens that “it gets better.” A new PRRI/RNS Religion News Poll found that 3/4 of Americans link religious messages with negative views of gays and lesbians, and 2/3 see a link to the recent spate of teen suicides. Focus on the Family’s Jim Daly tells CNN that churches are not to blame.

Sarah Palin, meanwhile, is not talking as much — at least about her faith on the Tea Party campaign trail. Another Delaware Republican (no, not Christine O’Donnell) says the separation of church and state is a Nazi idea; his Democratic opponent is working that one for all its worth. Michael Gerson shakes his head at the Tea Party‘s reading of the First Amendment, and Germany’s Spiegel magazine says Nazi references in American politics are “ignorant and offensive. And they should stop.”

After NPR sacked Juan Williams for saying Muslims on airplanes make him nervous, conservatives are now saying it’s time to end public funding for public broadcasting. Don’t worry about Williams, though; He’ll be fine with his new $2 million Fox contract. He also says there was “no bigotry” in his comments.

The National Organization for Marriage (that’s straight marriage, not gay marriage) hopes to seize on the Supreme Court‘s ruling on campaign financing and run political ads regardless of current campaign finance laws.

The NYT catches on to the trend of hospital chapels going interfaith (we wrote about it back in July). The Pentagon has a case of indigestion after admitting it hosted radical Yemeni cleric Anwar al-Awlaki (mentor to the Fort Hood shooter and the undy-bomber) for lunch not long after 9/11.

Pittsburgh is laying claim to the birthplace of more U.S. cardinals than any other city (3 out of 13, plus others with tangential Steel City roots, according to the always astute Ann Rodgers). Andrew Greeley, meanwhile, says Windy City Catholics‘ faith remains strong despite challenges (more on Greeley’s book from the NYT).

Orthodox Jews turned out to lobby against a proposed ban on full-face veils for Muslim women in Quebec, basically arguing that what’s bad for Muslims now could be bad for Jews later.

News
Study: Biden still leads among Latino Christian voters, but Trump’s support has grown
Opinion
Building interfaith community at work
News
600 faith leaders sign letter urging California governor to stop transfer of incarcerated people to ICE
Opinion
What good is faith when your fertility treatments aren’t working?
Opinion
From King to Gandhi, racial justice brings faiths together
© Copyright 2020, Religion News Service. All rights reserved. Use of and/or registration on any portion of this site constitutes acceptance of our User Agreement and Privacy Policy, Privacy Statement and Cookie Notice. The material on this site may not be reproduced, distributed, transmitted, cached or otherwise used, except with the prior written permission of Religion News Service.