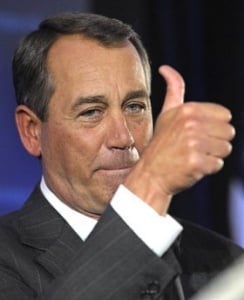 It’s the morning after the night before, and it’s feeling a lot like 1994. Time to read the Tea leaves:

By now it’s clear that Nancy Pelosi will be passing the speaker’s gavel to Ohio’s John Boehner (left) as the Democrats retained a slight majority over in the Senate. Religion wasn’t a huge issue in the 2010 midterms, but a couple of notable races stand out:

— Kansas Sen. Sam Brownback, a darling of social conservatives, is headed to the governor’s mansion.

— South Carolina’s Nikki Haley, a Republican daughter of Indian immigrants who faced questions about her Christian conversion, won her race for governor, 51 to 47.

— Louisiana Sen. David Vitter won another term in the Senate, 57 to 38, despite his “very serious sin” with a D.C. madam three years ago. Voters appeared hesitant to cast the first stone, and hey, in Louisiana, who can blame them?

— Three members of the Iowa Supreme Court who voted last year to legalize same-sex marriage were thrown out of office, a move that supporters called a message of “We the people,’ not ‘We the courts,'” and opponents called “most unfortunate.” Keep an eye on similar moves in other states.

— Louisiana GOP Rep. Anh “Joseph” Cao lost, as expected, in a heavily Democratic district, and wasn’t helped by a last-minute radio ad from the Family Research Council that criticized his votes to repeal Don’t Ask/Don’t Tell and a hate-crimes bill. Says Cao: “As a former Jesuit seminarian and practicing Catholic, it is ridiculous to say that I have ever taken a position against religious liberties. I am, however, a champion of human rights and justice for all.”

— And of course we can’t forget former Alaska Gov. Sarah Palin, the “mamma grizzly” leader of the Tea Party insurgency, whose kingmaker role in 2010 sets her up nicely (with substantial support from Christian conservatives, if not the GOP establishment) for a 2012 White House bid.

Mark Silk has more “electoral tidbits” to chew on here. Democratic faith-outreach gurus Eric Sapp and Burns Strider (who had little work from the DNC this cycle) say Democrats dropped the ball this time around, and it shows. Frank Schaefer says Republicans won because many rank-and-file “have already given up on this world and are waiting for the next.”

— Colorado defeated, 70 to 30 percent , a “personhood” amendment that would have protected all human life from “the beginning of biological development.” Supporters vowed to try again after their second consecutive defeat in as many years. And just for fun: Denver voters also defeated an Extraterrestrial Affairs Commission to report UFO sitings.

— Oklahoma approved, 70 to 30 percent, an amendment to prohibit the use of international law in state courts — most especially Islamic Shariah law.

— Californians will still have to toke up illegally after a bill to legalize recreational use of marijuana fell short, 54 to 46 percent.

The question (well, one of them, at least) now turns to what politically minded religious conservatives want from the GOP House, or rather, what they’ll be able to get. Concerned Women for America made clear they expect a seat at the table, and the Family Research Council is asking the question: “Do the elections signify a turn toward conservative social concerns?” Al Mohler is taking a wait-and-see approach, and sounds skeptical.

In other news as the world kept spinning last night …

City officials in King, N.C., changed their minds and opted to allow a Christian flag to remain flying at a veterans memorial; watch for possible (and likely) action from the ACLU. A nun who goes by “Sister Susie” is under investigation for allegedly embezzling $800,000 from Iona College outside New York City. Speaking on nuns, SNL alum Molly Shannon is apparently working on a new HBO show about a nun who leaves the convent, described as “a female 40-Year-Old Virgin with a huge dollop of Catholic weirdness thrown in.”

The spokesman for ultra-conservative Belgian Archbishop Andre Leonard quit, saying he can no longer work for a “loose cannon” that sympathizes with pedophile priests. Catholic officials in Mexico are trying to distance themselves from the largess bestowed by drug lords who build chapels, roads and bridges, while the faithful seek solace in charms, potions and spells that even Christine O’Donnell wouldn’t recognize.

Egypt is on high alert for possible strikes after the al-Qaida affiliate Islamic State of Iraq killed dozens inside a Baghdad church and is now threatening Egypt. The Baghdad attacks make the fragile plight of Christians in the Middle East even worse, experts warn. Yemen took the largely symbolic step of putting U.S.-born radical cleric Anwar al-Awlaki on trial in absentia.

News
Brandeis University stands by caste-bias ban despite pushback from Hindu activists
News
Study: Biden still leads among Latino Christian voters, but Trump’s support has grown
Opinion
In the midst of deep grief, a scholar writes how Hindu rituals taught her to let go
Opinion
Why ‘namaste’ has become the perfect pandemic greeting
News
A Catholic priest takes on interfaith fight against COVID-19 in a sacred Hindu city
© Copyright 2020, Religion News Service. All rights reserved. Use of and/or registration on any portion of this site constitutes acceptance of our User Agreement and Privacy Policy, Privacy Statement and Cookie Notice. The material on this site may not be reproduced, distributed, transmitted, cached or otherwise used, except with the prior written permission of Religion News Service.