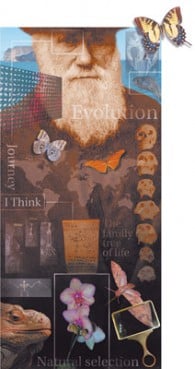 (RNS) Illustration depicting the life and influence of Charles Darwin, the Bible-carrying Anglican who advanced the theory of evolution. RNS file illustration by Andre Malok/The Star-Ledger of Newark, N.J.

WASHINGTON (RNS) White evangelicals and Tea Party members are less likely to believe in evolution and climate change than most Americans, a finding that could pose a particular problem for Republican presidential hopefuls.

But most Americans do not insist that their presidential candidates share their views on these issues, nor do they believe scientists have come to a consensus on them, according to the poll conducted by the Public Religion Research Institute in partnership with Religion News Service.

Even though these issues aren’t deal-breakers for most voters, they are “symbolically important for two groups that play an outsize role in Republican primary politics: white evangelical Protestants and members of the Tea Party,” said Robert P. Jones, CEO of PRRI.

“Because evangelicals and Tea Party members hold views that are significantly different than the general population, the challenge for Republican candidates is to talk about these issues now in a way that will not hurt them later in the general election,” Jones said.

On evolution, a third (32 percent) of white evangelicals affirm a belief in evolution, compared to two-thirds of white mainline Protestants, six in 10 Catholics and three-quarters of the unaffiliated.

On climate change, though strong majorities in every religious group say they believe the earth is getting warmer, white evangelicals (31 percent) are significantly less likely to believe the change is caused by human activity. That compares to 43 percent of white mainline Protestants, 50 percent of Catholics and 52 percent of the unaffiliated.

The poll reveals an unusual political schism on climate change. Typically, Republicans come down on one side of a question, Democrats on the other, and independents in the middle, said Dan Cox, PRRI’s research director.

On climate change, Republicans (49 percent) cluster with Tea Party members (41 percent) on whether there is solid evidence that the earth is warming. That compares to 81 percent of Democrats and seven in 10 independents.

“There is no reason for climate change to be a partisan issue,” said Cox. “But the political leadership on the issue has led to a polarization of opinion, with Democrats and independents on one side and Republicans on the other.”

Only four in 10 evangelicals say a candidate’s views on evolution would make no difference in their vote, and those who say they cared about a candidate’s position say they would be less likely to vote for someone who believes in evolution. By contrast, Americans overall who cared about evolution say they’d be more likely to vote for a politician who believes in it.

Tea Party members (33 percent), more than any other group, are more likely to support a candidate who does not believe in climate change. That compares to 16 percent of Republicans and 5 percent of Democrats.

Americans also doubt a strong consensus exists among scientists on climate change, a phenomenon that has frustrated the vast majority of climatologists who consider it a problem caused by human activity. Only four in 10 Americans believe a consensus exists.

A slight majority (51 percent) says a consensus of scientists believes in evolution, though evolution is overwhelmingly endorsed throughout the scientific community.

— On stewardship of the earth, 57 percent say God wants humans to live responsibly with animals and plants. A sizable minority (36 percent), however, prefers the idea that “God gave human beings the right to use animals, plants and all the resources of the planet for human benefit.”

The PRRI/RNS Religion News Survey was based on telephone interviews with 1,013 adults between Sept. 14 and 18. The poll has a margin of error of plus or minus 3 percentage points.