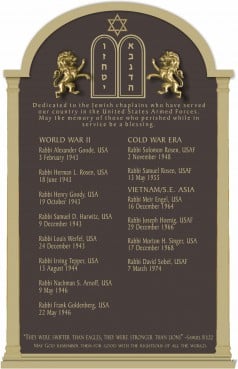 ARLINGTON, VA. (RNS) In a ceremony steeped in Hebrew prayers and military hymns, a monument to Jewish chaplains who died in active duty was unveiled Monday (Oct. 24) at Arlington National Cemetery.

“They are unrecognized heroes of both Jewish and American life, but today we begin the process of publicly acknowledging their contribution and their ultimate sacrifice,” said Allan Finkelstein, president of the Jewish Community Centers Association, which sponsors the council that endorses Jewish military chaplains.

The cemetery’s Chaplains Hill has been home to three monuments — one for World War I chaplains, another for Protestant chaplains from the two world wars and one for Catholic chaplains from World War II and the wars in Korea and Vietnam.

The newest addition honors 14 Jewish chaplains who died in combat, in accidents or of natural causes. They include one who traveled thousands of miles each month to reach Jewish military members in isolated areas in Alaska. Two others perished in plane crashes on their way to conduct Hanukkah services for military personnel.

“To have that uniqueness not represented at Chaplains Hill fails to represent one of the gems of American life,” said Robinson, a retired Navy chaplain. “Now we visually symbolize that on Chaplains Hill.”

Until the Civil War, U.S. law only permitted chaplains who were Christian ministers. After Jewish leaders petitioned Abraham Lincoln, Congress passed a law in 1862 permitting chaplains of any faith.

The best-known story of chaplains’ sacrifice is about the “Four Immortal Chaplains” — two Protestants, one Catholic and one Jew — who died on the transport ship Dorchester, which was torpedoed in World War II. They were last seen linking arms and singing hymns after giving up their lifejackets to young soldiers.

Kenneth Kraetzer, the former vice commander of the Sons of the American Legion for New York state, visited the monuments on Chaplains Hill in 2007 and was surprised that he could not find the name of the Dorchester’s Jewish chaplain, Rabbi Alexander D. Goode.

As he waited for the dedication ceremony to begin in the cemetery’s marble amphitheater, Kraetzer said the years of work to see Goode and others recognized were worthwhile.

“It’s very satisfying because of the kind comments we’re getting from the families of the 14 chaplains,” said Kraetzer, a Catholic from Pelham, N.Y.

Like Kraetzer, many Jewish leaders and descendants of the 14 chaplains were not aware that Goode and other Jewish chaplains had not been recognized at the cemetery.

“It’s long overdue,” said Alexander David Goode Fried, grandson of the fallen rabbi. “It’s a wonderful day but it’s obviously got an overlay of sadness to it.”

Before the two-hour dedication ceremony in the marble amphitheater, Fried and about 100 others gathered for a private unveiling on Chaplains Hill. Below the 14 names is a verse from 2 Samuel in the Hebrew Bible: “They were swifter than eagles, they were stronger than lions.”

The monument, which was approved by Congress in May, was supported by Jewish groups and veterans’ organizations. Its $25,000 cost was raised through private donations. It toured more than two dozen sites, including synagogues, city halls and community centers, in 10 states before the unveiling.

Near the close of the dedication ceremony, Robinson and Navy Chief of Chaplains Mark Tidd shared a poem called “Friendship” by Israeli poet Chaim Guri, taking turns reading stanzas in Hebrew and English:

“They are gone from our midst, all their laughter, their youth and their splendor but we know that a friendship like that we are bound all our lives to remember.”