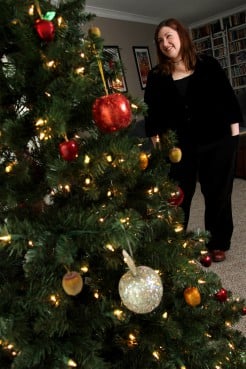 (RNS3-DEC16) Robin Zebrowski has acquired many apple ornaments over the years in honor of Sir Isaac Newton as she celebrates Newton’s birthday on Dec. 25, 1642, or as she calls it, Newtonmas. For use with RNS-NEWTON-CHRISTMAS, transmitted Dec. 16, 2011. RNS photo by Amber Arnold.

(RNS) Deck those halls with boughs of apples and top that tree with a finger puppet of Sir Isaac Newton.

At least that’s what Robin Zebrowski does at her home in Beloit, Wis., where she and her husband, Joshua, observe the birthday of the great 17th-century English scientist and mathematician, Dec. 25, 1642.

They send cards featuring a bust of the great man (inside reads: “Reasons Greetings!”), and exchange gifts that emphasize science and knowledge, including books and other “nerdy” things, Zebrowski said.

On Dec. 24, the couple and their two cats leave a plate for Newton’s ghost with an apple and a CD mix.

“My husband speculated that if Newton were really taking the place of Santa, he’d probably just rent a Prius, being environmentally conscious and unlucky enough to know that reindeer can’t fly,” said Zebrowski, 36. “Stupid gravity! We make him a mix CD each year to entertain him.”

The Zebrowskis are part of small, but apparently growing, number of atheists, skeptics and other nonbelievers who make merry over Newton’s contributions to science and math — the discovery of gravity, the invention of calculus and the first reflecting telescope, to name a few.

This is the Zebrowskis’ eighth Newtonmas — neutral territory for her former Catholicism, his former Judaism and their mutual unbelief. Extended family joins the fun, too, sending presents like boxes of apples and DVDs of science shows.

“I love that it’s a sort of counterpoint to a religious holiday by celebrating science and reason instead of superstition,” she said. “But because it shares so many traits with Christmas, it’s meant more to bring people together in spite of differing belief systems rather than push back antagonistically.”

The origins of Newtonmas are murky at best. Michael E. Marotta, a technical writer in Austin, Texas, has sent Newtonmas cards for 30 years and remembers a radio commentary he gave in 1982 that highlighted the parallels between Newton and Jesus.

Zebrowski thought she invented Newtonmas, but was delighted to learn she had co-revelers when the Skeptics Society sent her a catalogue of “Newtonmas gifts” — books like “The Believing Brain,” “How to Debate a Creationist” and “Why People Believe Weird Things.”

“I just made it up back in the 1990s as a joke, just to promote items we were selling,” said Michael Shermer, executive director of the Skeptics Society, which aims to debunk supernatural and pseudoscientific claims. “Everybody was giving me a hard time for calling our party a Christmas party so I said, ‘Alright, I am calling it Newtonmas.'”

A 1892 issue of Nature magazine bestows the carol credit on some Victorian-era English scientists.

“At Christmas 1890, or Newtonmas 248, for the first time,” the Nature article reads, “the members of the Newtonkai, or Newton Association, met in the Physical Laboratory of the Imperial University, to hear each other talk, to distribute appropriate gifts, and to lengthen out the small hours with laughter and good cheer. The Society has no President: a portrait of the august Sir Isaac Newton presides over the scene.”

Newtonmas picked up momentum — in keeping with Newton’s Second Law of Motion, of course — in 2007, when the evolutionary biologist and prominent atheist Richard Dawkins championed it in a British magazine.

“25 December is the birthday of one of the truly great men ever to walk the earth,” Dawkins wrote. “His achievements might justly be celebrated wherever his truths hold sway. And that means from one end of the universe to the other. Happy Newton Day!”

In 2009, the holiday got a pop culture bump when television’s “The Big Bang Theory” had Sheldon, a physicist, try to place a bust of Newton on a Christmas tree. When his roommate replied with a snarky, “Merry Newtonmas, everyone,” Sheldon replied, “I sense that’s not sincere, though I have no idea why.”

In fact, like all December holidays, Newtonmas has not avoided controversy. First, Newton’s birthday falls on Dec. 25 only by the Julian calendar, which was in use in England at the time of his birth. By the current (Gregorian) calendar, he was actually born on Jan. 4.

“Gravity explains the motions of the planets, but it cannot explain who set the planets in motion,” Newton said. “God governs all things and knows all that is or can be done.”

There’s also Newton’s passionate pursuit of alchemy, which modern scientists consider pseudoscience. But none of that matters to Newtonmas enthusiasts.

“It’s like that episode of Seinfeld where they celebrate Festivus,” Marotta said. “It’s a holiday for the rest of us.”

Science teachers and students have been gleefully rewriting Christmas carols to mark the birthday of Sir Isaac Newton on Dec. 25, 1642, as a way to lighten the tension of final exams. Here are a few examples …

On the tenth day of Newton,

My true love gave to me,

And the discovery of gravity!

“Gravity” (sung to the tune of “Jingle Bells”)

Keeps us on the ground.

An apple fell on Newton’s head,

What goes up comes down.

If earth you must escape.

“Deck the Labs” (sung to the tune of “Deck the Halls”)

Deck the labs with Newton’s Laws

You should study them because

They’ll be on the physics test

You won’t want to say you guessed_

We’re subject to your “downing”

We cannot flee, you guarantee!