Why? Many observers trace it to lingering suspicion among evangelicals — a key Republican constituency — about Romney's Mormon faith.

And that has led some to suggest that Romney needs to make a speech about his Mormonism along the lines of John F. Kennedy's defense of his Catholicism to Protestant leaders during the 1960 campaign.

So could Romney pull a Kennedy? Should he?

Mike Huckabee, an evangelical favorite who sought the GOP nod in 2008, told Fox News after Romney's South Carolina implosion that the time had come for Romney to give it a shot.

“I do think he ought to address it,” Huckabee said, arguing that such a speech would “sort of dismiss it, make it less important.”

But few political observers, and apparently even fewer Romney's allies, appear to be urging that step, and they have good reasons for taking a wait-and-see approach:

1. Romney has more than a Mormon problem 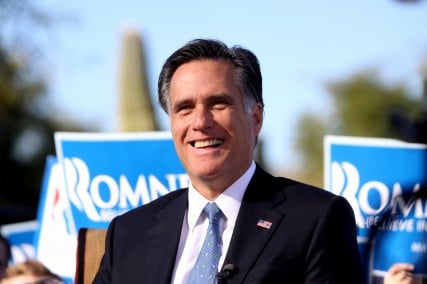 A Mormon in the White House would bring new levels of scrutiny from Republicans uneasy about the faith, and from Democrats concerned about its conservative political posture. RNS photo courtesy Gage Skidmore.

For one thing, the tracking polls in the GOP contest over the past months have registered more spikes and dips than an erratic electrocardiogram. Romney's cardiac moment in South Carolina — and his continuing struggle heading into Florida's Jan. 31 primary — needs to be seen in that context.

“I think it was more a result of Newt Gingrich catching fire combined with a pretty tough week for Mitt on issues like taxes and income,” said David French, a social conservative and Romney ally who with his wife, Nancy, just published a book, “Why Evangelicals Should Support Mitt Romney (and Feel Good About It!).”

“It's a pretty conventional narrative — at least by the conventions of this very volatile race,” French added. “If there was any blanket anti-Mormon sentiment, then Mitt would not have been up to begin with.”

2. Romney doesn't need to rally the Mormon base

When Kennedy addressed the Greater Houston Ministerial Association in September 1960, it was only two months before the November election, and he did not have to worry about his Democratic base the way Romney has to worry about securing the GOP base to win the primaries.

Kennedy's chief task in 1960 actually was not to convert his audience; they were already a lost cause, and he knew it. What the Kennedy campaign hoped to do was to influence the 23 percent of the wider electorate who were still undecided.

“The campaign's polling showed that yes, if Kennedy could paint himself as a victim of anti-Catholic bigotry, that will move people your way,” said Shaun Casey, a professor of Christian ethics at Wesley Theological Seminary and author of “The Making of a Catholic President: Kennedy vs. Nixon 1960.” And it worked.

Romney's “religion” problem is about numbers as much as theology. As Casey notes, Kennedy's other task in Houston was to rally his Catholic base, which he did. But rallying an already strong GOP Mormon base wouldn't do much for Romney.

While Kennedy had a Catholic population of 40 million behind him — about one-quarter of the electorate, concentrated in key battleground states — Mormons today number just about 6 million in the U.S., and are geographically concentrated in the Mountain West in mostly reliable red states (with the exception of toss-ups Nevada and Colorado).

Romney already gave a “Houston” speech — and it didn't work. Back in 2007, Romney was struggling to overcome evangelicals' doubts about his Mormon faith. While the speech was well received, it didn't move Iowa caucus-goers one iota back then, and a second speech now would likely not convince suspicious evangelicals in Florida (and beyond).

3. Romney may not want people to know he's Mormon

By talking about his Mormonism, Romney would call attention to his Mormonism. Politically speaking, that's a huge risk. Many Americans, and Republicans in particular, tend to consider Mormonism a “cult” — or “super spooky-wooky!” as Broadway's hit musical, “The Book of Mormon,” puts it. Calling extra attention to Mormon beliefs could just affirm those views, or tell evangelicals who don't know about Romney's religion that he is, in fact, a Mormon.

If Romney seeks to legitimize Mormons, he also runs the reviving evangelical concerns about the Mormon “threat.” While many conservative Christians consider Mormons a cult, in real life they are not so odd. They are not the alien “other,” as many in 1960 believed Roman Catholics to be, nor is Romney an African-American with an exotic pedigree, the way Barack Obama was viewed in 2008 (and still is by many in 2012).

The problem is that Mormons are so much like evangelicals, or what evangelicals want to be — clean-cut, disciplined, hard-working, family-loving, flag-waving, church-going conservatives — that many evangelicals seem them as a kind of heretical competition. The fear is that if Romney mainstreams Mormonism, he gives credibility to a potential rival for evangelical souls.

“I do not believe for one moment that if a Mormon like Mitt Romney were elected president he would be a puppet controlled by the Mormon hierarchy,” Hal Gordon, a former speechwriter for Ronald Reagan and Colin Powell, wrote in a recent column.

“But even if he kept his faith completely private, the election of a Mormon president would, ipso facto, swathe Mormonism in a respectability that it has long coveted.”

Romney's biggest task is convincing conservative Christians that he is a conservative, not that he is a Christian. Evangelicals have shown they are happy to back all sorts of unorthodox candidates (anyone remember Herman Cain?). They never fell for fellow evangelicals Michele Bachmann or Rick Perry, and now they are rushing toward Newt Gingrich, a thrice-married convert to Catholicism.

Evangelicals may not love Mormons, but they are really down on moderates. Indeed, Romney is arguably “not Mormon enough,” Richard Land, a top Southern Baptist official, said on the eve of the South Carolina vote.

“If his stance on life and his stance on marriage had been consistently what the stance of the Mormon church has been, he would have far less doubts among social conservatives,” Land said.

Ralph Reed, head of the Faith and Freedom Coalition and a top evangelical political activist, said he doesn't think Romney's Mormonism will necessarily preclude him from winning evangelical votes or the GOP nomination, so he doesn't need to make the Kennedy speech at this point.

“Down the road” may be a good idea. Surveys show that Democrats — still seething over Mormon involvement in California's Prop 8 fight over gay marriage — are much less likely to accept the idea of a Mormon president than are Republicans, and are less accepting of the idea than even conservative Christians.

So picture this: If Romney can secure the nomination, he could give a speech about his faith next September to an audience of suspicious liberals. By doing so, he would win the hearts and votes of Republicans — including evangelicals — who would see him as the victim of anti-religious bias.

And that would be the real Kennedy moment.