Agitated and at times caustic, the governor went after openly gay Assemblyman Reed Gusciora, who had hammered Christie for saying that in the 1950s and 60s activists “would have been happy to have a referendum on civil rights rather than fighting and dying in the streets of the South.”

Christie was trying to compare his call for a statewide referendum on gay marriage to the civil rights struggle.

“What I said was I'm sure that civil rights advocates would have liked to have this as another option but it was not available to them,” Christie said on Monday (Jan. 30). “Yet you have numbnuts like Reed Gusciora who put out a statement comparing me to George Wallace and Lester Maddox.”

Christie praised legendary civil rights activist Rep. John Lewis, D-Ga., who held his own Trenton press conference to condemn the governor's remarks, adding that civil rights never would have won on statewide ballots in the South.

Gusciora said if Christie didn't like the comparison to two notoriously racist governors, “then he should change his position on marriage equality and sign the bill into law.”

(Matt Friedman and Jenna Portnoy and write for The Star-Ledger in Newark.) 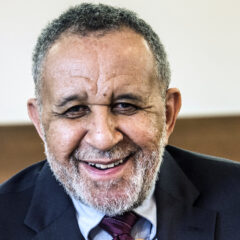