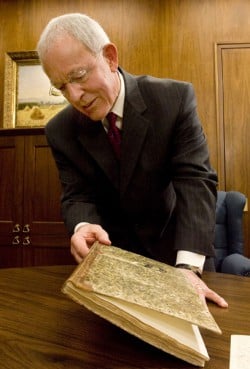 SALT LAKE CITY (RNS) A Mormon student surfs the Internet for a school assignment and discovers that Mormon founder Joseph Smith had multiple wives, even marrying a 14-year-old.

A returned Mormon missionary, preparing a Sunday school lesson, comes across a website alleging that the Book of Mormon was plagiarized from a novel.

Surprised by what they find so easily online, more and more Mormons are encountering crises of faith. Some even leave the fold and, feeling betrayed, join the ranks of Mormon opponents.

It's a growing problem, acknowledges Marlin Jensen, the outgoing historian for the Church of Jesus Christ of Latter-day Saints, and it's one Mormon leaders are working to confront.

“Never before have we had this information age, with social networking and bloggers publishing unvetted points of view,” Jensen said. “The church is concerned about misinformation and distorted information, but we are doing better and trying harder to get our story told in an accurate way.”

The church “has made no effort to hide or obscure its history,” Jensen said, but some aspects — such as polygamy — “haven't been emphasized often because they were not necessarily germane to what is taught at present.”

Can the LDS church do better to explain its history, even to its own members? Sure, Jensen said.

“Can we weave some of this into our seminaries, institutes and adult curriculum? I think we can, and efforts are under way to do that.”

The church has assigned a staffer to create “a strategy to get church history onto the Web,” he said. “We are also working on an initiative to answer some of these more pressing questions.”

Late last year, the church's publishing arm, Deseret Book, put out “No Weapon Shall Prosper: New Light on Sensitive Issues” to address some of the hot-button issues of Mormon history and doctrine.

While Mormons should not be “consumed with provocative materials critical of the (LDS) church, the day for ignoring such matters is long past,” editor Robert Millet wrote in the book's introduction.

“The Internet is filled with thousands of pages of anti-Mormon polemic, and it is extremely difficult for people to receive an honest and fair appraisal of Mormonism without significant effort on their part.” Chapters are written by various authors — most of them professors at church-owned Brigham Young University — and tackle tough topics, including the Mormon view of God; the differing accounts of founder Joseph Smith's “First Vision”; and Smith's money-digging activities and plural marriage to teenage girls.

The contributors stress that there are sound answers to these sticky questions.

“We are fully persuaded that Mormonism is not only true and faithful but also reasonable,” Millet wrote. “Ours is in fact a rational theology.”

Jensen insists critics overstate the LDS exodus over the church's history. “To say we are experiencing some Titanic-like wave of apostasy is inaccurate,” he said.

Other Mormon observers, though, see such defections as a major trend, especially among 20-somethings. “I definitely get the sense that this is a real crisis,” said Mormon scholar and writer Terryl Givens. “It is an epidemic.”

There is a “discrepancy between a church history that has been selectively rendered through the Church Educational System and Sunday school manuals, and a less-flattering version universally accessible on the Internet,” Givens said.

“The problem is not so much the discovery of particular details that are deal breakers for the faithful; the problem is a loss of faith and trust in an institution that was less than forthcoming to begin with.”

Another issue is the “veneration for Smith and other leaders that imposes on them an idealized portrait of goodness and inerrancy out of all proportion to Smith's own self-understanding of his role,” said Givens, a professor of literature and religion at the University of Richmond.

“Biblical prophets like Moses and Jonah are depicted as accomplishing God's

Why not take the same approach, he asked, with Mormon prophets?

For those who discover unwelcome information about the church's history online, Bushman said, “the whole picture changes in a flash.” The best way to prevent this from happening, Bushman said, is to give Mormons “the whole story from the beginning.”

“If the disruptive facts are worked into the history Latter-day Saints learn as they grow up, they won't be turned upside down when they come across something negative.”

Indeed, said Givens, “if you tell a 12-year-old child that Joseph Smith used a 'peep stone' in a hat to translate the Book of Mormon, he'll think that's cool or interesting.”

But when Latter-Day Saints find out about that on the Internet at age 50, he said, they'll ask, “Why didn't the church tell me?” And by then, Givens said, the church may have lost them.

Martini Judaism
COVID has led us all into sin
Signs of the Times
COVID-19 crisis provides opportunities and grace
Opinion
In an era of disinformation we have to hold The Tennessean to a higher standard
News
From flannelgraphs to Zoom, churches bring Sunday school home
Opinion
Learning trust in the sharing economy