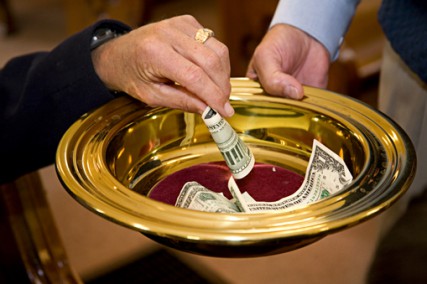 (RNS) When Republican presidential hopeful Mitt Romney released his federal tax returns for the past two years, he disclosed that he and his wife, Ann, gave about 10 percent of their income to their church, a well-known religious practice called tithing.

In that way, the Romneys are typical Mormons, members of a church that is exceptionally serious about the Old Testament mandate to give away one-tenth of one's income.

But compared to other religious Americans, the Romneys and other Mormons are fairly atypical when it comes to passing the plate. Across the rest of the religious landscape, tithing is often preached but rarely realized.

Research into church donations shows a wide range of giving, with Mormons among the most generous relative to income, followed by conservative Christians, mainline Protestants and Catholics last.

Over the past 34 years, Americans' generosity to all churches has been in steady decline, in good times and in bad, said Sylvia Ronsvalle, whose Illinois-based Empty Tomb Inc. tracks donations to Protestant churches.

Ronsvalle's research shows that since 1968, contributions have slowly slumped from 3.11 percent of income to 2.38 percent, despite gains in prosperity.

In her view, churches have failed “to call people to invest in a much larger vision.” She believes that explains why giving to missions, distant anti-poverty programs or faraway ministries has sunk faster than giving for the needs of local congregations.

A recent poll by the Pew Forum on Religion & Public Life found that 79 percent of Mormons said they tithed to their church, a much higher percentage than in the Catholic and Protestant world.

The former Massachusetts governor and his wife slightly underpaid their tithe in 2010 but intend to make it up when their final 2011 income becomes clear, a spokesman for Romney's campaign told The Associated Press.

Under pressure to disclose, Romney recently released his federal returns, showing he is likely to pay an effective federal tax rate of about 15 percent on $45 million in income over two years.

The returns also showed the Romneys have already donated $2.6 million to the Church of Jesus Christ of Latter-day Saints for the 2011 tax year. That brings their church donations to $4.1 million on two years' estimated income of $42.6 million.

They made other charitable contributions of $3 million as well.

Republican presidential hopeful Newt Gingrich's 2010 return showed charitable donations of $81,000, or about 2.5 percent of his $3.2 million income. About $9,500 went to the National Shrine of the Basilica of the Immaculate Conception in Washington; the balance of his charitable giving was not disclosed.

President Obama's return showed donations of $245,000, or about 14 percent of his $1.8 million income. The 36 contributions went to a wide range of secular and faith-based health, educational and community development groups.

A broad study called the U.S. Congregational Life Survey found that only about a third of Catholics, half of mainline Protestants and two-thirds of conservative Christians reached even the 5 percent level of giving.

Researcher Cynthia Woolever said mainline Protestants in her study gave slightly more than evangelicals in absolute dollars, but less as a percentage of income.

Her study did not include Jewish or Muslim congregations because of their smaller numbers.

Ronsvalle and others said generosity tends to be higher among evangelicals because of their regard for the authority of Scripture, where the command is repeatedly found, from Genesis 14, describing Abram's gift to God of “a tenth of everything” to Malachi 3, in which God promises blessings on those who tithe.

Rick Warren, perhaps the most famous evangelical pastor in the country, has said he “reverse tithes,” giving away 90 percent of his income, including all the profits from his best-selling book, “The Purpose Driven Life.”

Woolever said Catholics appear at the far end of the spectrum because the Catholic Church does not stress tithing. In addition, she said, Catholic congregations tend to be larger, diluting the sense of individual responsibility for financial support.

No one passes a collection basket at Mormon services. Instead, offerings are mailed or sent in outside of the weekly meeting rite. Mormon leaders keep an accounting, and once a year Mormon families are invited to sit briefly with their bishop, the head of their congregation, and discuss their donations.

It may sound awkward, but it's not to Brenda Grant, a retired nurse from eastern New Orleans who, with her husband, converted from Catholicism more than 30 years ago.

Grant, like many others who follow the biblical mandate, sees tithing as both a command and a voluntary gesture of gratitude to God. It is also a way to secure continued blessings, she said.

She and her husband, Earl, believe it was partly because of their fidelity through tithing that God sent them blessings after their home was destroyed by Hurricane Katrina.

Ahead of the Trend
Most congregations are doing all right during COVID-19. But the future is uncertain.
News
Salvation Army starts red kettle program early amid ‘tsunami of human need’ caused by pandemic
Buddhism
Buddhist monks have reversed roles in Thailand – now they are the ones donating goods to others
News
When churches reopen, don’t sing or shake hands, do make sermons short, says new guide
News
California lays out pandemic rules for church reopenings
© Copyright 2020, Religion News Service. All rights reserved. Use of and/or registration on any portion of this site constitutes acceptance of our User Agreement and Privacy Policy, Privacy Statement and Cookie Notice. The material on this site may not be reproduced, distributed, transmitted, cached or otherwise used, except with the prior written permission of Religion News Service.