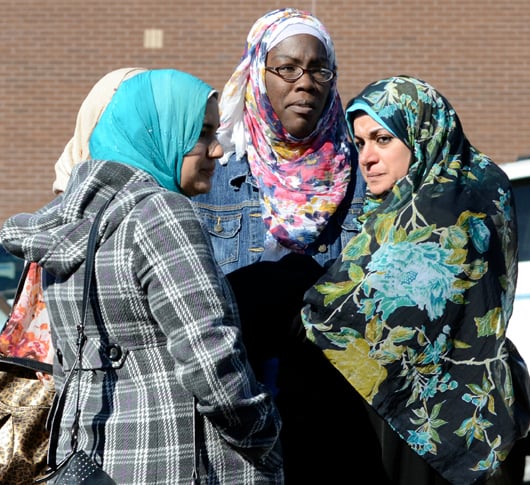 WILMINGTON, N.C. (RNS) As a Muslim woman waits in jail for word on a possible indictment in her alleged involvement in a murder-for-hire beheading plot, her friends and family are using social media to rally support for her cause. 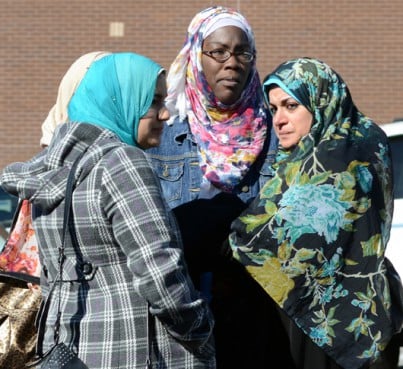 Supporters of Nevine Aly Elshiekh and alleged accomplice Shkumbin Sherifi, who are being held as suspects in an alleged behind-bars plot to kill a witness in a terrorism trial, gather outside a courthouse in Wilmington, N.C.

Shortly after the arrests in late January of Nevine Aly Elshiekh and alleged accomplice Shkumbin Sherifi, their family and friends organized the website "Our Ummah, One Body" to fight for their release.

The two residents of Raleigh, N.C., are being held as suspects in an alleged behind-bars plot to kill a witness in a terrorism trial that landed Sherifi's older brother in jail.

The Facebook page "Support Nevine Elshiekh and Shkumbin (Beme) Sherifi" includes quotes from the Quran about the responsibility of Muslims to care for prisoners.

"Allegations are not facts. Facts are not known yet," the website says. "As a community, we have known good from both. We remind the Muslim and non-Muslim community members that, according to the law, both are presumed innocent until proven otherwise."

About 30 friends and family drove two and a half hours to attend Elshiekh's daylong preliminary hearing on Friday (Feb. 3). After U.S. Magistrate Judge Robert B. Jones, Jr. found probable cause for a criminal trial and denied bond for Elshiekh, some of her supporters left the courtroom crying.

Emails and phone calls to the Islamic Association of Raleigh, the mosque she and her family attend, were not returned. Elshiekh's family declined to comment for this story.

Elshiekh, a 46-year-old special education teacher at a Montessori school in the Raleigh area, is charged with using interstate facilities for murder for hire. Federal prosecutors say FBI investigators tracked Elshiekh carrying messages to and from a convicted terrorist, Hysen Sherifi, at a Wilmington jail about witnesses from his 2011 trial whom he wanted "killed and beheaded."

Federal prosecutors also say Elshiekh allegedly provided part of the money for the first hit, though no one was killed.

Though the judge said Elshiekh does not pose a danger to her community, she could pose a flight risk because of her family ties overseas and because her passport is missing.

Her attorney, Charles Swift, said he plans to appeal the judge's decision. Elshiekh, who is a U.S. citizen and a longtime Raleigh resident, does not have a criminal record.

Jones had already denied bond for Sherifi, the younger brother of the convicted terrorist, Hysen Sherifi. He was arrested in Wilmington last month after leaving a visit with his brother in the New Hanover County Jail.

"The defendant herself admitted ... that the plot was to kill witnesses," the judge said. "She paid $750 to a confidential source and advised that Shkumbin Sherifi would provide the rest."

According to testimony from FBI agent Julia Hanish, the alleged targets of the plot were three confidential witnesses in the terrorism case of Hysen Sherifi, a Raleigh man who was convicted last year for a plot to attack the U.S. Marine base at Quantico, Va.

Hysen Sherifi was sentenced to 45 years for the Quantico plot, and is now facing federal charges of plotting to kill witnesses. Two other Raleigh men were also convicted, and three others pleaded guilty.

The FBI agent also testified that when Shkumbin Sherifi was arrested, he was allegedly carrying fake photos the FBI had supplied to make the jailed Sherifi think the first beheading had been carried out.

Elshiekh's defense attorneys denied the case was connected to her Muslim faith.

"The trial will show how her beliefs are completely at odds with the elements of this case," Swift said after Friday's hearing. "We will see who Nevine really is, a woman who was recently divorced and was the victim of an evil man. And we believe Hysen Sherifi to be an evil man."