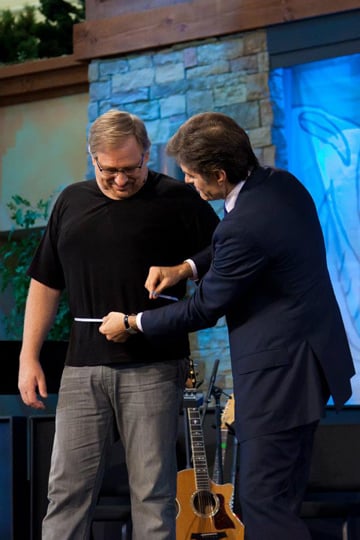 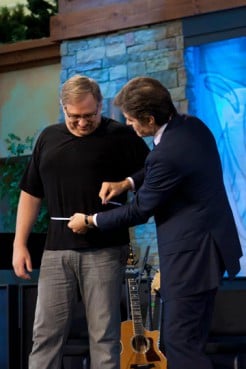 Warren, 58, says the revelation came about a year ago, during a marathon baptism session of about 800 people at Saddleback Church.

As he struggled to submerge members of his flock in the baptismal pool one by one, he realized his parishioners were heavy and that he, too, was fat, setting a terrible example.

Warren says his gradual weight gain -- about two to three pounds a year -- has added up over his 30 years as a pastor. To lose the extra pounds and inspire others to do the same, the former football player enlisted the help of three doctors.

Warren recruited a family physician, Dr. Mark Hyman; Dr. Mehmet Oz, New York Times best-selling author and host of NBC's "The Dr. Oz Show"; and Dr. Daniel Amen, a professor of psychiatry at the University of California, Irvine School of Medicine, and the lone Christian in the mix.

Together they launched "The Daniel Plan: God's Prescription for Your Health," named after a passage in the biblical Book of Daniel where the prophet and fellow Israelites refuse to accept "royal" food and wine from the Babylonian king, opting for water and simple vegetables instead.

The Daniel Plan encourages parishioners to link into Saddleback's vast network of small Bible study groups as support systems to get fit. Congregants exercise together at weekly classes such as "Walk & Worship" and "Pump & Praise." The three doctors offer tips on healthy eating and participants can create a health profile online.

Since the launch of the plan a year ago, more than 15,000 people have signed up and participants have shed a combined total of at least 250,000 pounds, according to the church. The 6-foot-3 Warren, who started the program at 295 pounds, shed 60 pounds in the first year. 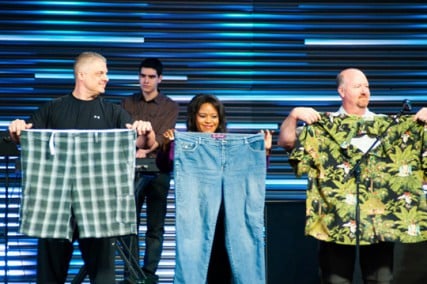 Amen, a Saddleback member, said "churches are by and large a place of illness."

The advantage of losing weight in a church, he said, is the support of the built-in community. "When you're surrounded by other people who have the same values, and they have the same health habits, you're going to do so much better," he said.

Tammie Allen, 41, a mother of two and a Saddleback parishioner, joined the Daniel Plan with other members of her Monday night Bible study group.

"You can't do it alone, and you can't do it without God's power," said Allen, who started exercising with other Saddleback parishioners and chose more fruits and vegetables. So far, she's dropped 97 pounds.

"My daughter tells me all the time she loves being able to put her arms around me."

Jim and Melanie Black, who just celebrated their 11-year anniversary, joined the program together and have dropped their taste for fast food. They say the motivation behind the change is noteworthy -- it's not for vanity's sake.

"We're doing it so we can serve God at a higher level," said Jim Black.

Chiquita Seals, 45, a single mother of two, is so far the church's biggest loser.

"In the beginning I thought, 'This is just another diet program,'" she said. Seals said she assumed she was "going to be eating rabbit food."

After all, Seals said, she had tried other diet programs like Jenny Craig and Weight Watchers, but this is the only one that stuck. When she began the Daniel Plan she weighed 267 pounds. She now weighs 135.

"All my life I thought that I could never be used by God," Seals confessed in a video posted on the church's website. But after losing the pounds, "I know I can be used by God."

To be sure, the program has attracted scrutiny. The church posted an online response to those who questioned the use of non-Christian doctors to help lead the program, saying that members "will never compromise our belief that Jesus is the only way to heaven or that the Bible is the 100 percent completely infallible and perfect Word of God."

"These doctors are helping us as friends," the statement concludes. "But are in no way advising our church on spiritual matters."

For his part, Warren still hopes to drop another 30 pounds. And, in typical Warren fashion, he's spreading his message to other churches. The bottom line, Amen said, is those looking to lose weight are in luck.

"If for whatever reason your family won't do it with you," he said, "well, you now have the family of Saddleback."