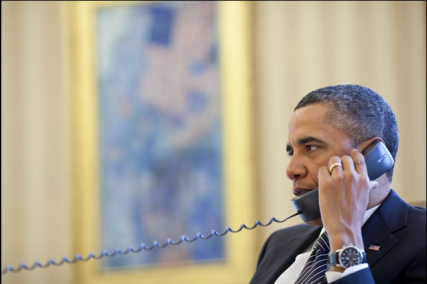 WASHINGTON (RNS) President Obama's effort to accommodate the Catholic Church by altering his administration's rule on birth control coverage has not appeased the church, congressional Republicans or GOP candidates trying to take his job next year.

Their continued anger over a requirement that nearly all employers offer free insurance coverage for contraception -- even with changes Obama announced Friday (Feb. 10) for faith-based institutions that object on religious grounds -- guarantees that the issue will percolate throughout the presidential election season.

Anthony Picarello, general counsel for the U.S. Conference of Catholic Bishops, summed it up this way: "It's the unstoppable force meets the immovable object."

While challenges to the rule could take the form of legal and legislative assaults, the White House and the Obama re-election campaign are comfortable with the revised rule, believing most Americans -- and particularly most women -- are on their side.

White House Chief of Staff Jack Lew insisted Sunday on NBC's "Meet the Press'' that "the right of women to all forms of preventative health care" was an unshakeable part of Obama's health care overhaul. He noted groups such as the Catholic Health Association supported the revised mandate, which lets certain religious employers avoid providing or paying for contraception directly.

That's not enough to appease the opposition:

-- The U.S. Conference of Catholic Bishops announced it would pursue, "with no less vigor, no less sense of urgency," a demand that the administration rescind the mandate for everyone "to protect religious liberty and freedom of conscience for all."

-- Republican leaders in Congress stuck by their plans to overturn the requirement with legislation. The issue "will not go away until the administration backs down," Senate Minority Leader Mitch McConnell, R-Ky., said on CBS' "Face the Nation."

-- Three of Obama's potential opponents in November -- Mitt Romney, Rick Santorum and Newt Gingrich -- thundered against funding birth control under Medicaid or through employer subsidies, calling it a radical overreach by government.

Romney, who failed to change a similar law when he was governor of Massachusetts, now says he would cut off taxpayer funding for contraception at community health centers and Planned Parenthood. Santorum called it an issue of "religious freedom -- it is the government controlling your life." And Gingrich said Obama is threatening to "declare war" on the Catholic Church.

The original rule exempted only churches, synagogues or mosques, not faith-based hospitals, schools and charities or private employers with conscience objections to contraception. On Friday, Obama said faith-based employers could defer to their insurance companies, but individual private employers remain under the mandate.

A Fox News poll of 1,100 registered voters, conducted Feb. 6-9 before Obama's Friday announcement, found 61 percent of Americans say employer health plans should be required to cover birth control for women, while 34 percent disagreed. Among women, two-thirds approved of the requirement.

Robert Boston, senior policy analyst for Americans United for Separation of Church and State, says: "If the state can demonstrate that access for all women to preventive health care is a compelling interest, it can trump religious freedom. The bishops are asking for a very broad exception -- the right of private employers, not just institutions, to personally cut off access to any employee. That's a definition of religious freedom way beyond what any court has defined as religious freedom. It allows your boss to impose his religion on you."

Catholic University Law professor Robert Destro argued that the Supreme Court decision in Citizens United recognizes that corporations -- including faith-based nonprofits and for-profit companies run by individuals of faith -- are covered under the rights of free religious and political speech.

Obama's mandate, in any form, is "a shell game" because it still links believers who find contraception immoral to insurers who will provide it free, even without direct participation from the religious person or institution, Destro said.

The mandate has touched off a predictable political firestorm.

"This thing has exploded like a Hiroshima mushroom cloud," Republican strategist Ralph Reed, chairman of the conservative Faith and Freedom Coalition, said Friday on CNN.

When the conversation turned to public opinion polls, he said, "You don't take a poll on religious liberty."

It's a mixed bag for Obama. His support among women is stronger than among men -- 48 percent of women approved of the job he's doing in the most recent Gallup Poll, compared to 44 percent of men. Some women's groups faulted him for negotiating with Catholic bishops over the issue and have criticized him in the past for other decisions, such as blocking over-the-counter sales of the "morning after" birth control pill to girls under 17.

Republicans say they have Obama on the defensive because of his perceived overreach into church affairs. The National Republican Congressional Committee is using his effort in a fundraising appeal: "In a country founded on religious liberty, Democrats have now done the unthinkable," NRCC Executive Director Guy Harrison wrote. "Democrats have inserted themselves into your health care, and now they want to insert their values into your religion."

"We all know how hard the right wing will fight to restrict women's rights -- it appears to be their No. 1 goal!" countered Sen. Patty Murray of Washington, chairwoman of the Democratic Senatorial Campaign Committee. "The very ability of women to participate equally in our society is at stake on Election Day."