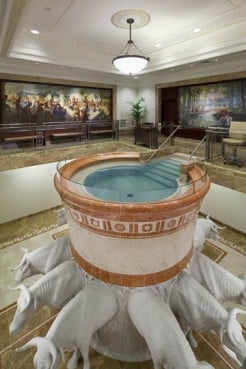 Mormons practice baptism for the dead in special temple baptismal pools to offer salvation to ancestors who may not have had a chance to accept the Mormon faith.

(RNS) The Church of Jesus Christ of Latter-day Saints has apologized for a Mormon who baptized the late parents of famed Nazi-hunter Simon Wiesenthal. But despite calls this week from Holocaust survivor Elie Wiesel and others to rethink the controversial rite, the church is unlikely to drop it entirely.

Latter-day Saints trace posthumous baptism to the Apostle Paul, who wrote in 1 Corinthians 15:29, “Else what shall they do which are baptized for the dead, if the dead rise not at all? Why are they then baptized for the dead?” Mormons believe that Joseph Smith, their faith’s founding prophet, restored the apostolic practice after centuries of neglect by mainstream Christians.

Proxy baptism was also Smith’s answer to a classic Christian conundrum: What happens to people who, through no fault of their own, did not join the church during their earthly lifetime? Should they be barred from heaven?

Mormons believe that vicarious baptisms give the deceased, who exist in the afterlife as conscious spirits, a final chance to join the Mormon fold, and thus gain access to the Celestial Kingdom. To Mormons, only members of the LDS priesthood possess the power to baptize.

“It doesn’t matter if you’re a Baptist or a Buddhist,” said Kathleen Flake, a Vanderbilt University scholar who has studied the church, “it’s about who has the authority to perform the sacrament.”

Flake said Mormons are encouraged to baptize at least four generations of forebears to seal the family for eternity. So the LDS church has built the world’s most extensive genealogical library in Salt Lake City with 700 employees and more than 2 billion names.

Baptisms need bodies, so young Mormon men and women dressed in white robes stand in for the departed souls in temple ceremonies worldwide. Mormons youths consider it an honor to be immersed in baptismal founts while the names of the deceased are recited.

LDS leaders emphasize that the spirits of the dead must accept the baptism — it cannot be involuntarily imposed. And Mormons are instructed to only baptize family members, particularly after Jewish genealogists discovered in the 1990s that 380,000 Holocaust survivors had been vicariously baptized. In response, the church imposed safeguards and spent $500,000 removing Jewish names from its baptismal registries.

But with 13 million Mormons worldwide, the church insists that it cannot control “pranksters or careless persons” who submit Jewish names or famous people such as President Obama’s late mother, Stanley Anne Dunham. And the church considers the ritual too essential to forswear.

“With deepest respect to our Jewish friends, the church cannot abandon fundamental aspects of its religious doctrine and practice,” the church writes on its website, “and it should not be asked to do so.”