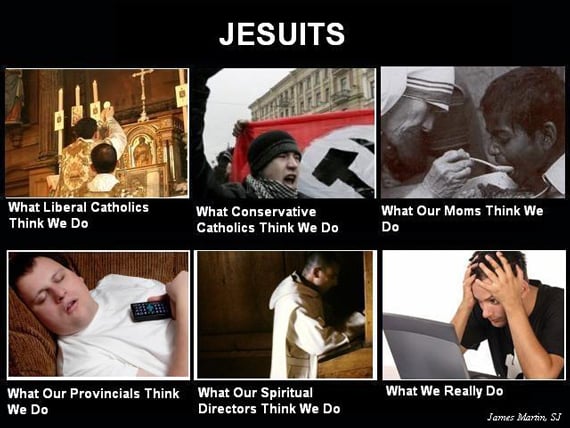 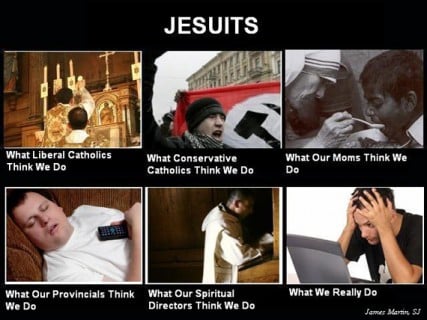 No joke: he was asked not to return. And he was sober.

But the “Theology on Tap” talk by Auxiliary Bishop James D. Conley of Denver was apparently a bit “too controversial” and upset other patrons and the employees.

So are the Jesuits at America magazine, which just published an editorial asking the bishops and their conservative allies to chill out on the “war on religion” rhetoric in the birth control fight.

(BTW, ever wonder what Jesuits really do? That is, when they’re not irritating or ingratiating? See photo.)

Speaking of contraception, a frequent meme in the ongoing Battle of the Pill is that 98 percent of Catholic women use contraceptives. Not quite. More like 90 percent. Same as everyone else.

Another meme: birth control doesn’t cost that much, so what’s the big deal? Actually, it’s not as affordable as you think. (And we’re looking at you, fellows.)

Oh yeah: adding contraceptives to the list of required health care services is actually NOT like trying to exterminate the Jews and plunging the world into war. Jeff Weiss figures you know that, but may need a reminder.

The former FBI agent in Tennessee who argued that mosques have no right to exist is now training local law enforcement how to fight terrorism. He’s conducting the training in a church.

NOTE: It’s tough to argue FOR religious liberty if you are trying to ban Sharia law.

With tensions with Iran rising, the feds are telling synagogues to be on alert, though there is no evidence of impending danger. But the NYPD is taking no chances, given the recent attacks on Israeli targets abroad.

Reversal: China is now working on dates for the U.S. religious freedom ambassador to visit.

Still good: that Richard Dawkins couldn’t remember the title of Darwin’s famous work on evolution right after he zinged Christians for their ignorance of the books of the Bible.

Okay, I lied. Last item is Catholicky: a nun is going to walk the red carpet at the Academy Awards. Last time she was there, in 1959, Mother Dolores was an up-and-coming starlet who appeared with Elvis in movies.

Now an HBO documentary on her life is up for an Oscar in the best documentary short category.

If only they could get her to host the show.