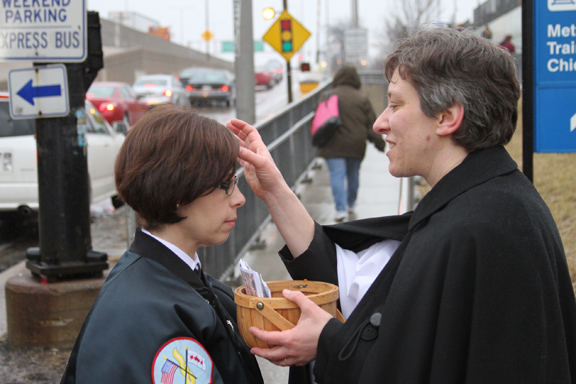 (RNS) Five years ago, the Rev. Teresa K.M. Danieley had an epiphany of sorts. If people can grab breakfast on the go or pay a bill from their cell phone, she thought, why shouldn't they be able to get their ashes in a flash? 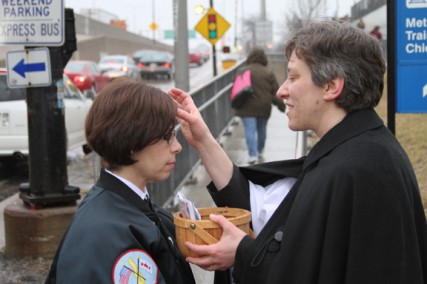 The Rev. Kara Wagner Sherer of St. John's Episcopal Church in Chicago imposes ashes on a passerby in 2011 as part of a growing "Ashes to Go" program in the Episcopal Church.

That's why, on Ash Wednesday 2007, Danieley planted herself in full priestly regalia at a busy intersection in St. Louis, smudging the sign of the cross on the foreheads of bicyclists, drivers and bus passengers.

This year, at least 49 Episcopal parishes across 12 states will offer ashes to passersby at train stations, bus stops and college campuses on Ash Wednesday (Feb. 22) as Danieley's "Ashes to Go" concept spreads nationwide.

"We live in a time where we can't just sit back and wait for people to come to us," said Bishop Stacy F. Sauls, chief operating officer for the New York-based Episcopal Church. "We have to meet people where they actually are."

Danieley, the rector of St. John's Episcopal Church in St. Louis, said the idea was born in a Bible study discussion in late 2006 or early 2007. That first year, she offered a brief Ash Wednesday liturgy to about 75 or 100 people who crossed her path.

"It started sort of half-jokingly, but it became something pretty profound," Danieley said. "It's fulfilling a spiritual need but also a pragmatic need. It's showing flexibility in an institution often seen as very inflexible."

For at least some people, it's working. Kathleen Dimmich, a 26-year-old real estate agent, became an active St. John's parishioner after getting her ashes from Danieley in 2009.

"I had been in St. Louis for maybe a month and hadn't found a church yet," Dimmich said. The mobile Ash Wednesday program showed that St. John's "was obviously an active parish in my neighborhood, which was important to me."

In 2010, Mellott decided to give her friend Danieley's idea a try and offered Ash Wednesday ashes during the morning rush hour. Within a year, she had 25 area churches participating.

"In my congregation, a lot of folks can't get to church, not just on a Wednesday but on a Sunday," Mellott said. "But there's a lot of people who really want to be able to claim the symbols of their faith and that relationship with God." 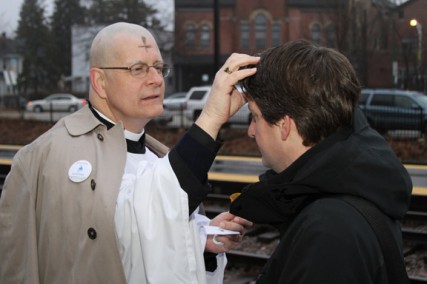 Episcopal deacon Scott Elliott imposes ashes on a passerby in 2011 in Chicago as part of a growing "Ashes to Go" program in the Episcopal Church.

While the program may never gain churchwide approval, it has the support of top church leaders like Sauls -- especially as active membership in the Episcopal Church has dropped 11 percent in the past five years.

"It's a really creative idea for how to crack the door open and engage people in a small way in their spiritual life this time of year," Sauls said.

Still, supporters acknowledge that convenience comes with compromises. Sauls said Ashes to Go misses the "full life of the community" experienced in a traditional church setting.

And within the Episcopal Diocese of Chicago, where Ashes to Go is most popular, only about 20 to 25 percent of churches are participating, Mellott said. Some have declined for logistical reasons, while other leaders feel it's too lighthearted a concept for the start of the church's most solemn season of the year.

But Danieley rejects any notion that Ashes to Go is cheap grace.

"We can't pretend that the way we did things 50 years ago is what we should be doing today," she said. "When a church is seen as inflexible, it's seen as not in touch. What is more important: that someone participates in a meaningful liturgy or that they do it in a particular space?"