ST. LOUIS (RNS) An Illinois bishop has confirmed that a Roman Catholic priest was fired because he “simply would not and could not pray the prayers of the Mass” under a new translation that went into effect last year.

In a rare letter of explanation about an internal personnel dispute, Bishop Edward Braxton of Belleville, Ill., publicly responded to the firing of the Rev. William Rowe, who has been pastor of St. Mary’s Catholic Church in Carmel, Ill., for 18 years.

The case, which has garnered international media attention, also led to a second priest in the Belleville diocese to resign a leadership post in protest.

Braxton said in the Feb. 14 letter that “several” parishioners of St. Mary’s had brought audio and video evidence to the bishop “which showed the many changes and omissions Fr. Rowe makes in the Mass.”

Rowe offered Braxton his resignation last year after a meeting during which the bishop barred Rowe from improvising prayers during Mass. Rowe said that when he prays the Roman Missal — the book of prayers, chants and responses used during the Mass — he tends “to change the words that are written in the book to match what I was talking about” in the homily.

According to Catholic liturgical practice, priests are duty bound to use the prayers laid out in the Missal. “These changes consist of far more than ‘a few words,'” Braxton wrote.

In an interview two days after the letter was sent, Rowe called the letter “pure Bishop Braxton.”

“He mentioned in the letter that we clash in our ecclesiology — our image of the church,” said Rowe, 72. “He’s right. He seems to consider the church as the bishops’, and my notion is that the church starts with the people.”

There has never been an established penalty for improvising prayers, and bishops have been willing to look past an individual priest’s extemporizing. But in December, the Vatican mandated that Catholics in every English-speaking country in the world adopt a new translation of the Missal.

Rowe said Braxton had warned him five years ago to stick to the words as written. Last June, the bishop sent a letter to the diocese’s priests saying: “It will not be acceptable for any priest or any parish to refrain from using the new prayers due to their personal preference.” 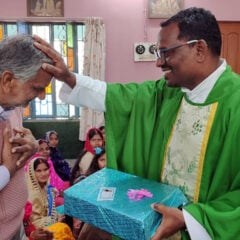