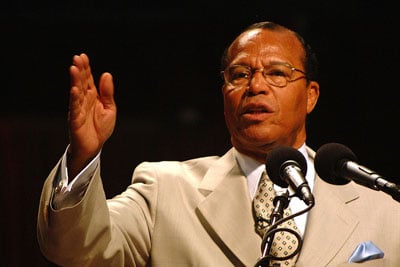 (RNS2-OCT06) Minister Louis Farrakhan, leader of the Nation of Islam, addresses a crowd in Los Angeles in 2002.

(RNS) Jewish leaders on Monday (Feb. 27) denounced Nation of Islam leader Louis Farrakhan after he delivered a four-hour speech on Sunday that was laced with anti-Semitic statements about Jewish control of the media.

Speaking to thousands of supporters during the 82nd annual Saviors' Day celebration in Chicago, Farrakhan accused “Zionists” of trying to push America into war with Iran and dubbed Al-Jazeera, the Dubai-based news channel, as Al Jew-zeera.

“I'm not anti-Semitic, I'm just telling the truth,” Farrakhan asserted, alleging that Jews were responsible for a controversial 2008 cover of The New Yorker that depicted President Obama in Muslim garb.

“In 100 years, they control movies, television, recording, publishing, commerce, radio, they own it all,” Farrakhan added.

Farrakhan also alleged that 9/11 was carried out by the U.S. government, criticized Obama for letting down blacks and Muslims, and warned the president about being influenced by Satan.

Deborah Lauter, civil rights director at the New York-based Anti-Defamation League, said she wasn't surprised by Farrakhan's remarks. “If there's any surprise, it's that he continues to attract a following,” she said.

Farrakhan also used the annual address, which commemorates the birthday of the group's founder, Wallace Fard Muhammad, to bemoan the ongoing Arab Spring protests, which last year claimed the life of his “good friend” Moammar Gadhafi, the longtime Libyan dictator.

“The Arab Spring didn't start in the Muslim world. It started from plans in the United States to take over the Middle East, its natural resources,” Farrakhan said.

Ticking-off a long list of inflammatory statements made by Republican politicians against Obama, Farrakhan suggested that President Obama would be a target for assassination — possibly at the hands of an unwitting Muslim dupe.

“If an atmosphere of hatred is being created for Obama, then what is the next step?” Farrakhan said.

While Nation of Islam members call themselves Muslims, mainstream Muslims reject the group's racist overtones and its belief that the late Elijah Muhammad was a messenger of God.

Farrakhan also warned against going to war against Iran over its nuclear ambitions or threats to Israeli security.

“If America goes to war with Iran, all the young people in the Nation, I'm telling you, you do not fight in America's wars against another Muslim country. We are all conscientious objectors,” he said.