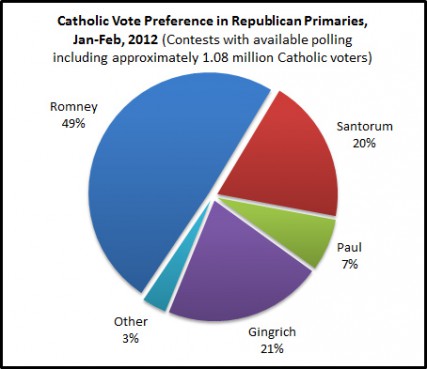 Were you a “Daydream Believer”? RIP Davy Jones of the Monkees.

Who is the real Catholic candidate in the Republican race? Maybe it’s Mitt Romney, the Mormon.

CARA’s Mark Gray crunches the numbers (in graphic) that illustrate one of the few constants in this contest: Catholics have been backing Romney, not Newt Gingrich or Rick Santorum.

A new voter guide from one Catholic group indicates why this might be the case.

But in a GOP primary, would you rather have evangelicals? Santorum’s sure got ‘em.

And he’s got ‘em thanks to his Christian conservatism, which he needs to rally voters in coming rounds, the WaPo reports, while also showing he’s not obsessed with the sex stuff.

Because voters have other things on their mind. Like the economy.

Tell that to the Catholic hierarchy: a popular (and gay) music teacher at a Catholic school in St. Louis was fired after an archdiocesan official overheard him talking about plans to wed his partner. The parish had known about the relationship for 20 years, and seemed cool with it.

This news comes after word that a woman in Washington, D.C. was publicly denied communion at her mother’s funeral because the priest figured out she was a lesbian.

But the woman, Barbara Johnson, and the archdiocese, are keeping it classy.

“So many people have said to me that now they'll never go back” to church, Johnson told NCR of the reaction to being denied communion by Fr. Marcel Guarnizo. “That would break my mother's heart…[My family's] mission is not to divide the church,” she added. “Our mission is to receive an apology from Fr. Marcel.”

Maryland’s (Catholic) Gov. Martin O’Malley will make Maryland the eighth state to legalize gay marriage when he signs a bill into law today.

Somehow the whole gay thing doesn’t seem to be as big a deal for the Catholic archbishop in London.

Contraception is still a big deal over here. Especially for Romney, since he keeps going back and forth. First he raised eyebrows by saying he opposed a Republican bill in the Senate to limit insurance coverage of birth control, then he said no, he supported the bill.

But he still doesn’t really want to get into it: “[T]he idea of presidential candidates getting into questions about contraception within a relationship between a man and a woman, husband and wife, I’m not going there.”

HHS Secretary Kathleen Sebelius says a new rule on contraception coverage is coming soon, and they pinkie swear that they’ll get it right this time.

Maine Republican Olympia Snowe isn’t waiting around for her party’s right wing to drive her away; she’s quitting while she’s ahead, and maybe making way for a Democratic pick up.

A federal judge in Montana sent around an ugly, racist email about President Obama, but he's guilty with an explanation: “I didn't send it as racist, although that's what it is,” chief U.S. District Judge Richard Cebull. “I sent it out because it's anti-Obama.”

Daniel Pearl, the Wall Street Journal reporter who was kidnapped and executed by terrorists in Pakistan in February 2002, is another deceased Jew who was baptized by proxy by Mormons.

And remember the saga of the Orthodox Jewish high school basketball that was going to have to forfeit a big playoff game rather than play on the Sabbath? The Texas Association of Private and Parochial Schools that refused to reschedule the games is getting more heat.