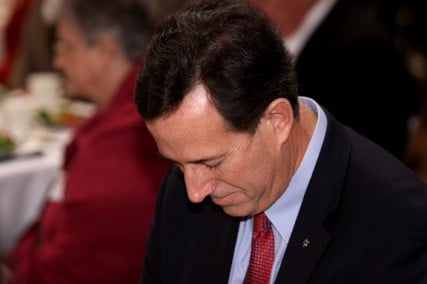 (RNS) Strapped for cash and staff, Rick Santorum has enlisted a ragtag but politically potent army to keep his campaign afloat: home-schoolers.

Heading into Super Tuesday (March 6), Santorum is urging home-schoolers to organize rallies, to post favorable features on social media and to ring doorbells on his behalf.

“Santorum has been very aggressive in reaching out to the home-schooling community, especially in the last month,” said Rebecca Keliher, the CEO and publisher of Home Educating Family Publishing.

Drawing on his experience as a home-schooling father of seven, the former Pennsylvania senator has also sought to rally enthusiasm by pledging to continue that course in the White House.

“It’s a great sacrifice that my wife, Karen, and I have made to try to give what we think is the best possible opportunity for our children to be successful,” Santorum said during a March 1 campaign stop in Georgia. “Not just economically, but in a whole lot of other areas that we think are important — virtue and character and spirituality.”

Rallying home-schoolers could provide a huge boost to Santorum’s bare-bones campaign. The tightly knit and predominantly Christian communities are famous for furnishing favored candidates with hundreds of steadfast foot soldiers. Studies show that home-schoolers are disproportionately likely to vote, donate and volunteer for campaigns.

“When they find someone who gives credence to the fact that they home-school, they tend to be very loyal and active and engaged,” said Keliher, a home-schooling mother of five in Nashville, Tenn. Many are motivated by the unwelcome prospect of seeing home-schooling critics elected to office.

An estimated 2 million children are home-educated in the U.S., according to Brian Ray of the National Home Education Research Institute. Nearly three-quarters have conservative Christian parents who seek to instill the moral and religious values that they believe are lacking in public schools, according to Ray and other experts.

Despite their growing diversity, home-schoolers also tend to be politically conservative.

“They have an army of volunteers when they want to get behind a candidate,” said Bob Vander Plaats, president of The Family Leader, a conservative group in Iowa. “They’re great at door knocking, stuffing mailers and phone calling. They are really the feet on the ground.”

Farris, a leader in the home-schooling movement, said he will not endorse a candidate during the GOP primary, but he has praised Santorum profusely “for his stalwart defense of life, marriage, and the rights of parents.”

Home-schooling families often use campaigns as real-world civics lessons, with mothers taking their children along on afternoons as they make calls and volunteer at campaign headquarters, Keliher said.

“And you have triple or quadruple the effort when they bring the children,” she added.

Santorum is getting several times that effort with the Duggars, one of the country’s most famous — and largest — home-schooling families. The reality TV stars and their brood of 19 children have been stumping for Santorum across the country in a campaign-style bus.

Like the Duggars, many home-schoolers say Santorum’s staunch opposition to abortion and gay marriage is as important as his experience in home education.

“It’s his willingness to speak up for what’s true and not back down,” said William Estrada, the HSLDA’s federal lobbyist.

Estrada has endorsed Santorum in his private capacity and is helping his campaign network with home-schoolers in Super Tuesday states.

Estrada also runs the HSLDA’s Generation Joshua program for teenagers. A recent post on the group’s blog portrayed “Sir Santorum” as a gallant knight preparing to battle the “Knight of Washington.”

But not all home-schoolers support Santorum. Many have a strong independent streak and favor Texas congressman Ron Paul. “One of the reasons people home-school is they don’t want anyone, especially the government, telling them what to do,” Keliher said.

Some home-schoolers also take issue with Santorum’s Senate vote for the No Child Left Behind Act, which increased federal oversight of local schools.

Others accuse Santorum of enrolling his children in a public cyberschool and sticking Pennsylvania taxpayers with the bill while he lived in Virginia from 2001-2004.

“In spite of all of his rhetoric about the evils of public schooling, Santorum had his children enrolled in a public school but called it ‘home-school,'” Catherine Dreher, a home-schooling mother in St. Charles, Mo., wrote on her blog, “The Tiny Libertarian.”

Still, many home-schoolers see Santorum as the more viable candidate, and have begun rallying to his side in large numbers, said Bruce Eagleson of the National Alliance of Christian Home Education Leadership.

“The key for a candidate is to excite the imagination of home-schoolers,” Eagleson said. “And Santorum has taken charge on that.”