(RNS) Last Sunday (March 11), Pastor Sheila Schuller Coleman appeared for apparently the last time before some 800 people at the morning service of the Crystal Cathedral in Garden Grove, Calif. 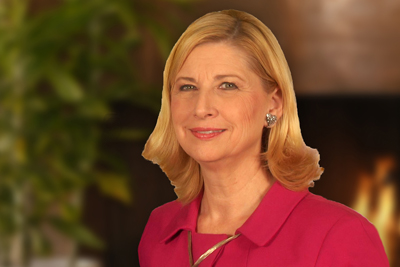 For members of the extended Schuller family who had built and shepherded the iconic megachurch into the spiritual home for 10,000 members, so much had changed:

— Faced with staggering debts and a bankruptcy filing, the glass building was recently sold to the local Catholic diocese, but can remain Protestant in the short term.

— The staff had dropped from 350 to 200, including the recent firings of Coleman’s sister, husband and brother-in-law, who had all worked on its “Hour of Power” broadcasts.

— Just the day before, her parents, Robert H. and Arvella Schuller, had departed the ministry they started more than 50 years ago, citing a multimillion-dollar fight with its board.

As members of the Schuller family head in new directions — Coleman and brother-in law Jim Penner plan to start a new church this Sunday — the famous glass-walled church offers a cautionary tale of the potential pitfalls facing family-run ministries.

“If you have a family ministry, the health of the relationships within the family is key to whether the governance of the ministry is going to work well or not,” said the Rev. Wes Granberg-Michaelson, a former board member and former general secretary of the Reformed Church in America, the denomination of the Crystal Cathedral. 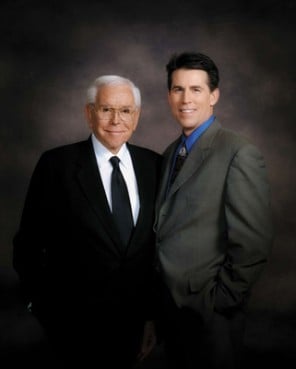 Crystal Cathedral founder Robert H. Schuller, left, parted ways with his son, Robert A. Schuller, right, over the future direction of the ?Hour of Power? television program in 2008.

Granberg-Michaelson said the turning point for the ministry came when the family disputed who should take the reins of leadership as Robert H. Schuller prepared to step back as the public face of the ministry. Initially, Schuller wanted to see his son, Robert A. Schuller, take his place, and passed on the mantle of senior pastor in 2006.

Within two years, the younger Schuller left after he and his father could not agree on the ministry’s future direction. The next year, Coleman was chosen to handle administrative duties.

“I think that Robert A. could have carried that ministry and could have continued it,” said Granberg-Michaelson. “I also think that it would have been possible to find a person from the outside that would make that a mission-driven ministry and essentially a ministry that moved beyond the family. But neither one of those things happened.”

Miriam Carver, an Atlanta-based nonprofit governance consultant, tried to help the ministry in 2008. She advised the board that it was inappropriate to have board members who also were staffers and family members. “You can certainly see that phenomenon, but it’s really bad practice because it’s a conflict of interest,” she said. The board declined to implement her recommendations.

The lessons from the downfall of the Schullers’ ministry can be taught to a wide array of organizations, experts say.

“There’s always been a caution against nepotism in all kinds of work,” said Michael Cromartie, vice president of the Washington-based Ethics and Public Policy Center. “Why shouldn’t it also extend to Christian ministries?”

Part of the reason Catholicism embraced priestly celibacy was to avoid “complicated inheritance issues” that surfaced in medieval times when priests were allowed to marry, said Christopher Bellitto, a historian at Kean University in New Jersey.

Family domination of a church has become increasingly rare, said Dave Travis, CEO of Dallas-based Leadership Network. His church think tank finds many of the first-generation pastors of large churches are taking a different approach. “They’re not family-controlled churches, for the most part, and they don’t necessarily aspire for their children to follow them into the ministry or into the ministry in that same church,” he said.

To be sure, some inherited ministries can work, even thrive — Jonathan and Jerry Falwell Jr., Joel Osteen and even Franklin Graham have all taken the reins of their ministries from their famous fathers. Travis said the family problems were only a part of the downfall of Crystal Cathedral, which also was affected by the focus on its TV ministry and its imposing building. 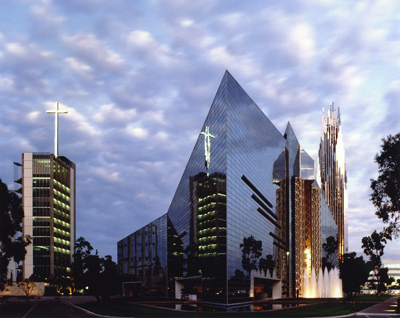 “They put a lot of stock in the building where they were,” he said. “As the neighborhood changed, they were kind of stuck there.”

Now located in a far more diverse area than the predominantly white one it was decades ago, the Crystal Cathedral finds that its Hispanic congregation is one of its most thriving ministries. But that, too, is changing: On April 1, it will begin meeting at the Anaheim Convention Center.

As the remnant of the dwindling Crystal Cathedral congregants contemplate their next steps, remaining leaders are urging them to stay put — and note that they will shun the contemporary flavor that Schuller’s daughter and son-in-law had supported.

“We invite everyone to join us next Sunday for worship in the Crystal Cathedral,” said John Charles, new chairman of the Crystal Cathedral Ministries’ board of directors, in a statement. “Since sharing this news with our congregation, we have received an outpouring of assurance and encouragement from numerous members of the congregation about their excitement over the return to the traditional worship style on which the ministry was founded.”

Whatever happens, the California church appears to be a shadow of its former self, when people across the globe would rave to Granberg-Michaelson during his travels about how they were helped by viewing Schuller’s “Hour of Power.”

“It touched countless people,” he said. “To see this come unraveled, it’s just a deep tragedy.”

Martini Judaism
COVID has led us all into sin
Opinion
Megachurches may be particularly threatened by COVID-19 closures
Opinion
Warning: Your piety might be dangerous to your health
News
Jentezen Franklin: ‘We’re unplugging everything. We’re going back to the raw gospel.’
Health & Lifestyle
Craig Groeschel, Life.Church pastor, quarantined at home after coronavirus exposure
© Copyright 2020, Religion News Service. All rights reserved. Use of and/or registration on any portion of this site constitutes acceptance of our User Agreement and Privacy Policy, Privacy Statement and Cookie Notice. The material on this site may not be reproduced, distributed, transmitted, cached or otherwise used, except with the prior written permission of Religion News Service.