CLEVELAND (RNS) Former Ohio autoworker John Demjanjuk died Saturday (March 17) in Germany, ending nearly 35 years of legal battles with officials in three countries who claimed he was a guard in a Nazi death camp. He was 91. 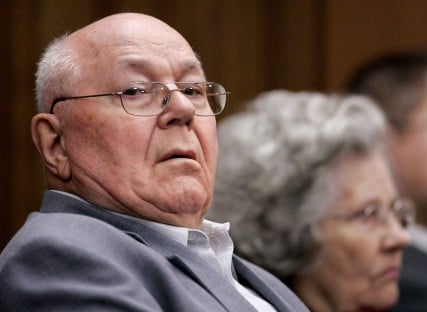 John Demjanjuk, seen here in 2006, died March 17 in Germany, ending nearly 35 years of legal battles with officials in three countries who claimed he was a guard in a Nazi death camp.

During his decades-long trials, Demjanjuk was imprisoned in the United States, sentenced to death in Israel -- until its highest court freed him -- and, last May, convicted in Germany for serving as an accessory in the deaths of more than 28,000 people at a death camp.

A German court sentenced Demjanjuk to five years in prison but he was freed while he appealed the conviction.

Demjanjuk had been living in a nursing home in Bad Feilnbach in southern Germany, according to The Associated Press. He died nearly three years after being taken from his home in suburban Cleveland and flown overseas.

Demjanjuk was deported after U.S. judges ruled that he lied about his Nazi past when he entered the country in 1952 and that he was a guard at two concentration camps and a death camp in World War II.

The cause of death was unclear, though Demjanjuk's family has said he suffered incurable bone marrow disease. His family and friends have said he was weakened by the legal fight with the U.S. government.

"My father fell asleep with the Lord as a victim and survivor of Soviet and German brutality since childhood," Demjanjuk's son, John Jr., told The Associated Press. "He loved life, family and humanity. History will show Germany used him as a scapegoat to blame helpless Ukrainian POWS for the deeds of Nazi Germans."

Demjanjuk's family fought for weeks in 2009 to prevent the deportation to Germany, saying their father was too frail and ill to withstand another trial. They also hammered away at the case of German prosecutors, saying Demjanjuk never harmed anyone, let alone took part in the deaths of thousands of people.

His case fueled a bitter debate over suspected Nazi war criminals: Should men in the last years of their lives face deportation and war-crimes trials for something that happened more than 65 years ago in the midst of war?

"Demjanjuk shows the Justice Department's determination to do the right thing, no matter the passage of time, to bring Nazi war criminals to justice," Alan Rosenbaum, a Cleveland State University philosophy professor and author of the book, "Prosecuting Nazi War Criminals," said Saturday.

"It's most fitting that he died in Europe, where he served the Nazi cause, and not in the United States. And hopefully, his body will not be returned to the United States, the country that brought down the Nazi regime."

Demjanjuk's family can have the body returned to the United States, but it is unclear whether that will take place.

Attorney Joseph McGinness, who over the last two decades has represented guards who patrolled the perimeter of concentration camps, said the government wasted its time and tax dollars in dealing with Demjanjuk and others.

"These were nobodies -- if in fact they were even there," McGinness said Saturday. "They weren't the people making the decisions in the camps. There was no reason to chase any of them. None of them had a rank above private. Every one of these people was nothing. They were draftees."

The Ukrainian-born Demjanjuk claimed he was drafted by the Soviet army during World War II, and was later captured by Germans and spent most of the war years in a series of prisoner-of-war camps.

After the war, afraid for his safety if he returned to Ukraine, Demjanjuk entered the U.S. in 1952 and settled in Ohio. He worked as an assembly line mechanic at Ford Motor Co. in Brook Park and became a naturalized citizen in 1958.

In 1977, using a Nazi identification card with Demjanjuk's name, birth date and parentage, the Justice Department asked a federal judge to revoke Demjanjuk's citizenship, charging that he entered the U.S. illegally by lying on his application about his whereabouts during the war.

The Justice Department found nearly a dozen survivors of the Nazi death camp at Treblinka. They identified Demjanjuk as "Ivan the Terrible," a Ukrainian guard who tortured Jewish inmates and operated the gas chambers that exterminated an estimated 900,000 people, mostly Jews, during the war.