WASHINGTON (RNS) Despite Democratic worries that President Obama could lose Jewish support over his Middle East policies, a new poll indicates that Israel is not the top political issue of American Jews, with only 4 percent calling it the most important factor in their vote.

Like most Americans, Jews are primarily concerned about the economy, the poll found, but they differ from the general public on a number of political and social issues, including their relative willingness to accept Muslims and same-sex marriage.

The findings emerged Tuesday (April 3) from a new survey released by the Public Religion Research Institute, which aimed to identify the religious issues and ideas that Jewish Americans consider most important. The results, said PRRI CEO Robert P. Jones, show a strong Jewish streak for social and economic justice.

“These values resonate with religious Jews as well as Jews who identify as culturally or ethnically Jewish,” he said. 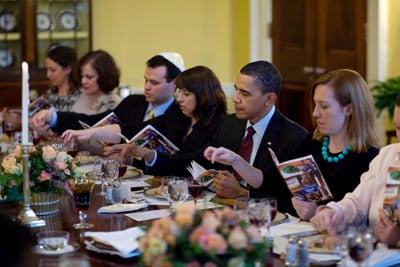 President Barack Obama and the first family mark the beginning of Passover with a Seder with friends and staff in the Old Family Dining Room of the White House, March 29, 2010.

Eight in 10 respondents said pursuing justice and caring for the widow and the orphan are important in shaping their politics — ranking higher than any of the four other “values’” listed on the survey.

Ranking lowest: “seeing every person as made in the image of God,” with 55 percent calling it a very or somewhat important motivator of their political beliefs.

More Jews (46 percent) named a “commitment to social equality” as the factor most important to their Jewish identity, followed by 20 percent who said “support for Israel” and 17 percent who said “religious observance.”

As for Jewish views on Muslims, 66 percent agree that American Muslims are an important part of the U.S. religious fabric — markedly higher than the 54 percent of all Americans who hold this view.

The poll also showed Jewish voters' strong support for Obama. Twice as many said they would vote for Obama over a GOP candidate. That level of support is nearly unchanged from the same point during Obama’s first presidential run.

Kenneth Wald, a political science professor who studies Jewish voting patterns at the University of Florida, said he has heard the political chatter that U.S. Jews are so upset with Obama’s treatment of Israel that they will move away from their traditionally Democratic leanings and vote for a GOP challenger — but the survey doesn't find evidence for that.

“About three out of four American Jews voted Democratic in 2008,” Wald said. “Something relatively similar is likely to occur in 2012.”

Jews also expressed a strong preference for diplomacy over military approaches in U.S. foreign policy, preferring diplomatic means by a more than two-to-one margin. But there are significant partisan differences on this issue, with 81 percent of Jewish Democrats choosing diplomatic tactics, compared to 35 percent of Jewish Republicans.

The survey of 1,004 American Jews, which was one of the few studies of Jews conducted by a non-Jewish organization, has a margin of error of plus or minus 5 percentage points. It was funded by a grant from the Nathan Cummings Foundation.

Opinion
Against the darkness: Remembering Pittsburgh’s Tree of Life shooting
Spiritual Politics
Jewish voters edge further away from Trump
News
Poll: White evangelicals are religious outliers on every issue of concern to voters
Martini Judaism
Dear AOC: You blew it
News
Trump’s Israel strategy makes few inroads with Jewish voters
© Copyright 2020, Religion News Service. All rights reserved. Use of and/or registration on any portion of this site constitutes acceptance of our User Agreement and Privacy Policy, Privacy Statement and Cookie Notice. The material on this site may not be reproduced, distributed, transmitted, cached or otherwise used, except with the prior written permission of Religion News Service.