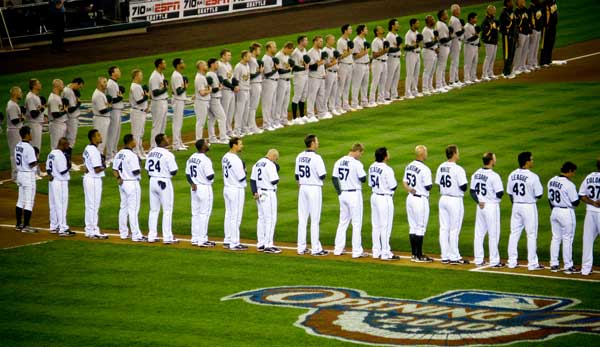 (RNS) For millions of Americans, Major League Baseball’s opening day is more than a rite of spring, it’s a near-religious experience. But for Jews and Christians in eight American cities, their team’s home opener coincides with actual holy days.

The Jewish Passover begins at sunset on Friday (April 6) with seders that celebrate their forebears' exodus from Egypt. It is also Good Friday, when Christians commemorate the crucifixion of Jesus.

Major League Baseball has fielded occasional complaints for playing on Good Friday, but April 6 is unusual in being both a Christian and a Jewish holiday this year. 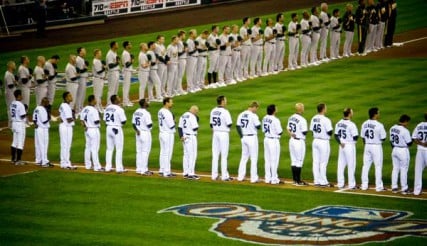 Major League Baseball sets the schedule in concert with ballclubs. Michael Teevan, senior director of public relations for MLB, said organizing the 2,430 games played by 30 teams each year is a complicated task.

“We certainly respect the solemn religious days and the people who observe them,” Teevan said. “But just as a logistical matter, it can certainly be a big challenge. Sometimes we’re at the mercy of how the calendar falls.”

Eighteen teams are playing on Friday, with eight hosting their home openers. All of the Friday games except for one - the Chicago White Sox visiting the Texas Rangers - start after 3 p.m. Christians traditionally maintain a solemn silence and refrain from entertainment from 12 p.m. to  3 p.m. on Good Friday to mark the time when Jesus hung on the cross.

John Blake, a spokesman for the Rangers, said, "I have checked with our fan relations, ticket sales, and on-line departments and they have not received any feedback regarding the timing of Friday's game."

Teevan said MLB did not tell teams when to start their games on Friday. "We believe teams know their markets and their traditions best," he said.

Rick Vaughn, director of communications for the Tampa Bay Rays, said Good Friday and Passover both played a role in the team’s decision to start their home opener against the New York Yankees at 3:05 p.m. Sunset falls at around 7:45 p.m. in Tampa, which likely leaves time for nine innings and a quick dash home for Passover.

But Jewish fans in some cities worry that they may have to leave games early - or miss them entirely - in order to make their seders.

Jeffrey Amdur, who has attended every Baltimore Orioles opening day since the 1970s, told the Baltimore Jewish Times that he may skip out during the seventh-inning stretch this year.

“I am torn,” Amdur told the newspaper. “I hate to leave before the end of the game, unless the O’s are losing by a lot.”

Greg Bader, the Orioles’ director of communications, said the team is aware that Friday is a Christian and Jewish holy day.

“We take many factors into consideration when determining a game time,” Bader said. “In this instance, the determining factors were that opening day in Baltimore is traditionally a 3:05 start and the fact that this Friday is twenty years to the day that Oriole Park at Camden Yards opened, when the game time was just after 3 p.m.”

But some believers are firing high-and-tight fastballs at Major League Baseball.

Bill Donohue, president of the New York-based Catholic League, said that even communist Cuba made Good Friday a national holiday this year. “It’s time baseball Commissioner Bud Selig took a page from the communists and exercised some prudence: there should be no games on Good Friday,” Donohue said in a statement.

Donohue acknowledged that it’s too late to cancel this Friday’s games, but he proposed that baseball adopt the “O’Connor Rule,” after the late Cardinal John O’Connor of New York.

“Cardinal O’Connor said it well when he remarked that `playing on Good Friday, at the very least from 12 to 3, is cheap and cheapens our culture, no matter how big the box-office receipts,’” Donohue said.

Archbishop Jerome Listecki of Milwaukee took a good-humored approach to the home opener on Friday for his city’s Brewers. The first pitch is scheduled for 3:10, and Listecki reminded Catholics to attend a church service before the game and to follow Good Friday rules by abstaining from eating meat and poultry at the ballpark.

“As much as we love the Brewers, unlike Jesus, they didn’t die for your sins,” the archbishop said in a statement. “With regard to beer and brats on Good Friday: let’s just say that’s why God created the three-game series.”