PROVO, Utah (RNS) For young people struggling to come to terms with being gay and Mormon, 22 Brigham Young University students have a message: “It gets better.”

Lesbian, gay and bisexual students at BYU and some of their straight allies released a video on YouTube on Friday (April 6), adding to some 40,000 video messages that aim to prevent depression and suicide among gay teens as part of the It Gets Better project. Seattle writer Dan Savage and his partner, Terry Miller, launched the effort in September 2010 following a string of youth suicides.

At BYU, the video is just one more sign of changing attitudes toward being gay and Mormon. Two days before the video's release, an estimated 600 BYU students crammed into a room that seated 260 to listen to four students discuss what it’s like to balance their faith, which teaches that same-sex sexual activity is sinful, with their sexual orientation. The speakers were part of an unofficial school club called Understanding Same Gender Attraction. 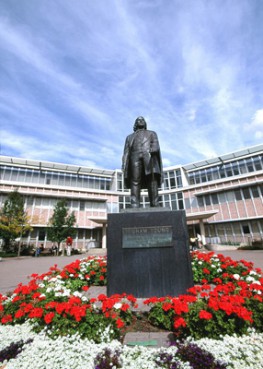 Brigham Young University in Provo, Utah, was rated the most religious college campus, where “students pray on a regular basis,” by The Princeton Review. BYU was also dubbed
the “most stone-cold sober” campus in the country.

“We’re trying to live it and create new spaces for us to be gay and Mormon and be active in the church,” said Adam White, 21, who appeared both on the panel and in the YouTube video. “That in and of itself is an ‘it gets better’ message.”

In recent years, the LDS church-owned school has adjusted its Honor Code to allow students to identify as gay without facing sanctions so long as they avoid physical intimacy with members of the same sex. Chastity before marriage is expected of all students.

“Students who are upholding the Honor Code are welcome as full members of the BYU community,” school spokeswoman Carri Jenkins said. She declined to comment specifically on the new YouTube video, which was produced by former BYUtv broadcaster Kendall Wilcox. He’s currently working on an independent documentary called “Far Between” about being gay and Mormon.

White hopes the video not only lets young gay Mormons know they are loved but changes perceptions about BYU. As a student there, he insists it’s not as conservative or closed-minded as some people might think.

“I feel like there’s been a very negative light cast on Mormons when it comes to LGBT issues,” said White, a theater arts major from Washington, D.C. “You can declare your orientation and be OK with that, and you won’t get kicked out (of BYU). That recognition is a really big step for a lot of people. It’s given a lot of people hope.”