CENTREVILLE, Va. (RNS) It's been five years since Celeste Peterson's only daughter was killed in a shooting rampage at Virginia Tech and she's finally made peace with God.

Which is not to say it's been easy. 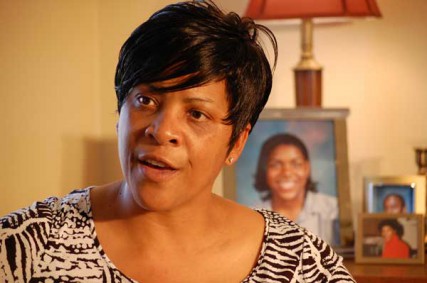 Celeste Peterson's only daughter was killed in a shooting rampage at Virginia Tech five years ago.

The five-year anniversary of the nation's most deadly shooting spree — which claimed the lives of 18-year-old Erin Peterson and 31 other victims on April 16, 2007 — is still too fresh.

“Whether we're talking year one or year five, it still feels like yesterday,” said Celeste Peterson, noting that it's been five years “since I heard her voice or held her hand.”

The darkened hours of night are sometimes the worst. When Erin went away to college, the one thing her parents asked of her was a call every night, which sometimes came in as late as 1 a.m. Mother, father and daughter would swap prayer requests or updates from home. Their last call, Celeste Peterson remembers, ended in “I love you. I love you, too. See you tomorrow.”

If Erin's mother had her way, she'd hear that voice again.

“When someone so close to you has passed, why can't God allow them to make a phone call home at least once? If I could just hear her voice again, I would love that.”

The attention from the media and the community that finds the Petersons this time of year can trigger the tears that were once in a constant free fall at just the mention of Erin's name. In time, Celeste Peterson says, finding a way forward in the midst of grief can still weigh her family down. But her lifelong faith has helped her through.

“It is what I knew about who God is and my personal relationship with him that really kept me going,” she said. “I know that people say that all the time in situations like this, but I say it with ease.”

Raised in the church and a lifelong believer, Celeste Peterson learned early to rely on God. But in the days and months following her daughter's death, she barely talked to God. And when she did, it wasn't because she really wanted to.

“Thank you for this day. I'm not talking to you. Amen” was how the conversation usually went until she was again ready to talk to God again.

When that day finally came, “I never felt like I had missed a beat. He knew how I was feeling at the time. God was my friend and I told him that I thought he left me high and dry. And he told me that he had a plan.”

On the eve of the fifth anniversary, the Petersons will gather with hundreds of friends, family, and faith groups that have turned out for the past four years to pay tribute to Erin during what they call a jubilant gospel concert and dance celebration hosted at their church here.

“We've been celebrating with a gospel concert because Erin was a Christian. She was what I called a cool Christian and a realist. It was an easy thing for her to talk about Christ and to tell people that they needed to pray,” said the mother, who doubts that her own courage and faith could have compared to Erin's when she was her daughter's age.

Even as a kid, Erin was comfortable sharing her faith at school, said her elementary school teacher, Francie Donnell. She recalled when Erin came to her with an idea for a gospel medley that her classmates could perform at their eighth-grade graduation. She can still see Erin's tall brown frame towering over her mostly white classmates as she pleaded with them to stop looking down at their feet when they sang, and instead, feel the spirited music and just clap and sway.

Donnell's son, William, was a junior at Virginia Tech that fateful April day. And like Erin, he had class scheduled in Norris Hall, where most of the victims were gunned down. Five years ago, both families descended on the campus in Blacksburg, Va., in search of their children. When they met at a hotel, Celeste Peterson's first question was about Donnell's son.

“She was concerned about our family even though she had just lost her daughter. That's the kind of special caring person that she is,” said Donnell, who delivered one of the eulogies at Erin's funeral.

Last month, a jury awarded the Petersons and another family $4 million each in their wrongful death suit against Virginia Teach.

Celeste Peterson no longer has the daughter she called her “gift” and the 6-foot-1 basketball center her husband called his best “buddy.” In 2007, they started a nonprofit group, the Erin Peterson Fund, in their daughter's memory to award scholarships to promising high school students.

“Erin accepted no limitations when it came to helping those in need,” her mother said. “I understand, now, how she felt.”

Opinion
Faith and true crime: The morals of writing about seekers and grisly deaths
Follow us on Facebook!
Submit your photos to RNS