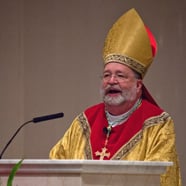 Nuns on the run? The Vatican’s crackdown on the main leadership organization for women religious continues to generate wide interest, and sympathy for the sisters.

The Rev. Jim Martin’s Twitter campaign on their behalf is going viral: #WhatSistersMeanToMe

Canon lawyers say the nuns may not have many legal options for keeping the Leadership Conference of Women Religious viable.

Pope Benedict could make their life easier, but does this takeover mean he’s reverting to form?

The U.S. bishops want the U.S. embargo on Cuba ended.

A church-state group wants the IRS to investigate Peoria Bishop Daniel R. Jenky (in the photo) for pretty much endorsing President Obama’s rival in November – if you think comparing Obama to Hitler sends that message.

Obama’s opponent means Mitt Romney in plainspeak, and Romney will get a coveted commencement honor at Liberty University, an evangelical bastion that could help Mormon Mitt continue to solidify support from the Christian right.

After some back and forth, Christian sexpert Pastor Mark Driscoll will be speaking at Liberty today, though his topic is likely to be a good bit more hard core than Romney’s.

Evangelicals say they need a lot more straight talk about the birds and the bees.

Richard Land faces a probe from his own Southern Baptist denomination in the ongoing fallout from his explosive Trayvon Martin remarks.

Could this all end in Land’s fall?

“Joe the Plumber” is in an uphill race to unseat 14-term Democratic congresswoman Mary Kaptur in Ohio, but he feels good because, as he tells CBN, “God’s on my side.”

Joe may need the help. Problem is, the Almighty hasn’t had a great track record this year.