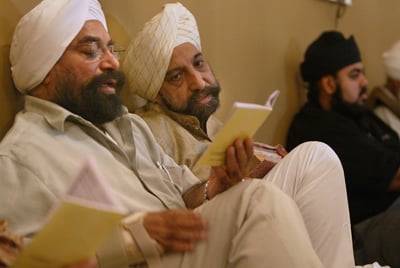 (RNS) Sikh civil rights activists will unveil a mobile phone application next week (April 30) that they say will allow travelers who believe they have been profiled by airport screeners to file complaints directly from their cell phones.

The New York-based Sikh Coalition launched the app project after a steady increase of complaints about unfair treatment at U.S. airports. Sikh men do not cut their hair as an article of faith, and their turbans have been met with suspicion by some Transportation Security Administration personnel.

The group emphasized that that the “FlyRights” app is meant to help Sikhs and other religious and racial minorities who have been subject to profiling, such as Muslims, South Asians, Arabs, blacks, and Latinos. The TSA, which is under the Department of Homeland Security, accepts traditional written and email complaints, and has a section on its website where travelers can file complaints online. But many travelers are not sure how to file a complaint, feel intimidated, or forget details and lose motivation as time passes after an alleged incident.

“The new application will give those who feel powerless a quick and easy way to have their complaints filed and ultimately heard,” said Amardeep Singh, a co-founder and program director of the Sikh Coalition.

Through the third quarter of 2011, the TSA had received only 11 complaints, a figure that Singh said allows the agency to claim it doesn’t profile. In reality, he said, there are many more incidents of TSA profiling based on the complaints the Sikh Coalition and other civil rights organizations hear from constituents.

By making it easier to file complaints, Singh said he hopes the app will “exponentially” increase the number if profiling complaints filed with the TSA. “It will make it possible for us to get closer to the truth,” Singh said.

In a statement, TSA officials maintained they are “committed to treating each traveler with dignity and respect throughout the screening process."

"TSA does not profile passengers on the basis of race, ethnicity or religion,” the TSA statement said, adding that the agency meets regularly with civil rights groups about improving screening procedures.

Some Sikh travelers reported being subject to additional screening every time they traveled through an airport; at some airports, including Oakland (Calif.) International Airport, the coalition said TSA screeners subject Sikhs to secondary checks 100 percent of the time.

The Department of Homeland Security has confirmed that complaints sent by the application will be considered official complaints, Singh said.

“To their credit, neither the TSA or the DHS have ever expressed any opposition to the idea,” said Singh.

September 3, 2020
Related Posts
By Alejandra Molina
Future of Sikh worship site in Southern California remains unclear
By Omar Suleiman
An American Muslim imam's letter to the American Sikh community
By Simran Jeet Singh
A pat-down at the airport passes the shame of racial profiling to my 3-year-old
By Alejandra Molina
Christians urge California governor to veto bill for abortion pill access at colleges
By Alejandra Molina
In Los Angeles, a synagogue opens its parking lot to people living in cars