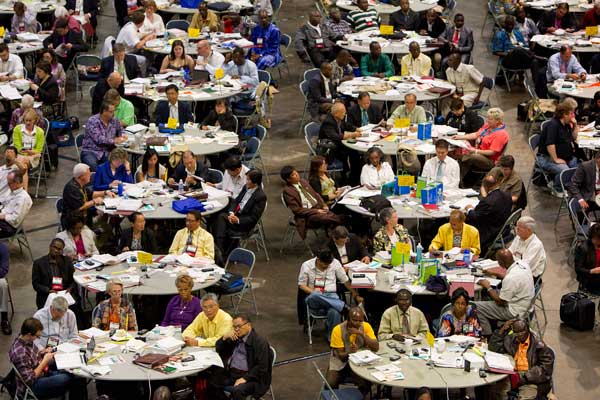 (RNS) United Methodists concluded their General Conference last Friday (May 4) without voting on gay clergy or same-sex marriage, a surprising end to a disappointing week for gay activists.

On Thursday, the nearly 1,000 delegates gathered in Tampa, Fla., soundly rejected two motions that would have amended the United Methodist Church's book of doctrine and rules, which calls the practice of homosexuality "incompatible with Christian teaching." After those votes, protesters flooded the convention floor, briefly shutting down the conference. 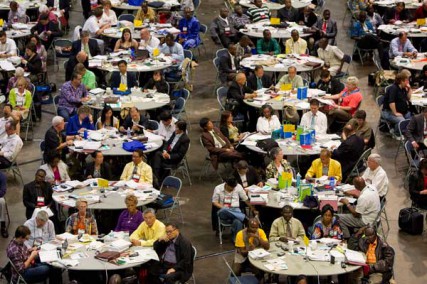 Conference planners, evangelical leaders and gay and lesbian advocates met later on Thursday and determined that there was little use in holding additional contentious debates on homosexuality, according to several sources. Proposals to ordain gay clergy and bless same-sex unions held little chance of passing, the parties agreed, and so were pushed to the back of the agenda, essentially assuring that they would not be debated.

"Leaders of the demonstration were told that the legislation was postponed to avoid more harm to LGBT people and their supporters," the Love Your Neighbor Coalition said in a statement. "The United Methodist Church had an opportunity to offer love, grace, and hope," the coalition said. "Sadly, we did not take that opportunity."

Leading up to General Conference, which convenes every four years, gay advocates had argued that momentum favored their cause. About 1,200 United Methodists clergy have agreed to break church rules and marry same-sex couples, surveys show young Christians favor expanding gay rights and other mainline Protestant denominations have adopted gay-friendly policies in recent years.

But the UMC, which is the largest mainline Protestant denomination in the country, is shrinking in the U.S. while growing in Africa and Asia, where conservative views on homosexuality predominate.

The conservative Institute on Religion & Democracy credited African delegates for upholding UMC's "incompatible" stance on homosexuality.  "Delegates from Africa, comprising about 30 percent of the total, were decisive in votes ... on wording that sought to soften the church's position," IRD said in a statement.

"This, to my knowledge, has never happened before in the 40 years that we've been debating this issue," Tooley said. "It is surprising that one side recognizes that they have no interest in perpetuating the debate."

The leaders of several United Methodist gay rights groups did not respond to requests for comment.