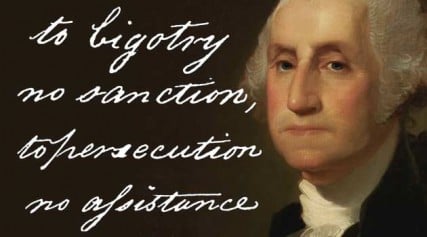 Religious reaction to President Obama’s evolutionary leap on gay marriage is being watched closely to see if it can signal anything about the political fallout. So far, the usual suspects say the usual things, but no one is sure what it will mean come November, if anything.

Mitt Romney affirms he is against same-sex marriage, but doesn’t seem to want to talk about it too much, or any other social issues near and dear to Christian conservatives:

“Aren’t there issues of significance you’d like to talk about?" Romney shot back at a TV interviewer who pressed him on drugs and gays and immigration. "The economy, the growth of jobs, the need to put people back to work, the challenges of Iran? We’ve got enormous issues that we face but go ahead, you want to talk about medical marijuana?"

But white evangelicals are still going big for Mitt over Barack, 68-19 percent.

Best moment of the House’s debate over gays in the military yesterday was when Rep. Loretta Sanchez (D-CA) pushed back against using the Bible to justify policies. She quoted Leviticus 20:13, which says a man must be put to death if he has sex with another man.

Man bites dog: The usual story is about conservative congregations fleeing mainline denominations for being too liberal. Now a small, gay-led Presbyterian church in West Hollywood is breaking away from the PCUSA because the denomination is not being liberal enough, despite its recent approval of gay ordination.

Catholic Cardinal John Njue of Kenya says the Catholic Church there is totally opposed to legislation of homosexuality and prostitution. “If the two are allowed to happen, where will be our family? Will it not be a total destruction of the family? This is why we are totally against this,” he explained.

Embattled Irish Cardinal Sean Brady says he won’t resign under pressure over his role in a sexual abuse case, but the Vatican may be pushing him out the door.

And no, it’s not all gays, all the time. A day after a House committee approved Paul Ryan’s “Catholic” budget, the Catholic bishops reiterated their opposition to it on moral grounds: “The proposed cuts to programs in the budget reconciliation fail this basic moral test.”

Southern Baptist leader Richard Land has been to the woodshed over his explosive (semi-plagiarized) remarks about Trayvon Martin and race and President Obama and every third rail you can think of. Now he has emerged and issued a five-part, two-page apology.

George Washington’s famous letter on tolerance written to the Jewish congregation in Newport, Rhode Island, is to go on display in Philadelphia after a long absence.

In Israel, archeologists are touting new evidence that Solomon’s Temple was a true fact. At least in the Old Testament, if you consider that the Bible.

And how bad off can the Anglican Communion be when one of its bishops is a great writer, theologian -- and Dylan impersonator?