(RNS) When the mind that first imagined the Wild Things disappeared for good last week, the children-turned-adults who adored Max and his wild rumpus with big-eyed monsters didn't just mourn the loss of Maurice Sendak; they also grieved for their own ever-fading childhoods. Maurice Sendak created some of the world’s best-loved contemporary children’s books, including 'Where the Wild Things Are'.

Since his death on May 8 at age 83, Sendak has been referred to frequently as the most important children's author of the 20th century. His millions of fans crossed borders of age, race, gender, nationality and religion.

It's a measure of Sendak's imagination that his stories — so infused with a very particular Jewishness — are absent evidence of Judaism or anything else besides a good read to his most important readers.

"As a child, I wasn't thinking about the Jewishness in his books," said Laurel Snyder, an author of children's books. "I was a kid."

Snyder said she grew up with "Zlateh the Goat," a 1966 story by Isaac Bashevis Singer, illustrated by Sendak. By then, Sendak had already won the Caldecott Medal, the highest honor for children's literature, for "Where the Wild Things Are," and Singer was one of the most important writers in America.

The pairing of two American literary superstars for "Zlateh the Goat" was important for both adult and children's literature, said Snyder. 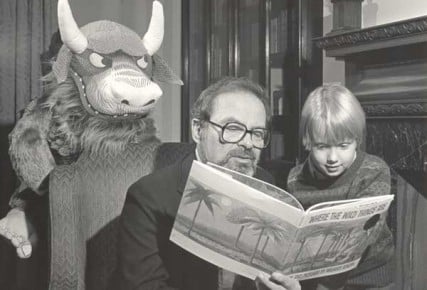 "Teaming them up not only brought a Jewish book like that into the limelight, but also brought a layer of literary legitimacy into the children's book world," she said.

Sendak's relationship to Judaism was perhaps most shaped by the Holocaust.

"The Holocaust has run like a river of blood through all my books," Sendak told The New York Times in 2006. "Anything I did had to deal with that — with my family, the ruination of my childhood, the humiliation of being a victim."

Neal Sokol, who included many pieces of Sendak's original artwork in his 2010 show, "Monsters and Miracles: A Journey Through Jewish Picture Books" at the Skirball Cultural Center in Los Angeles, said Sendak continually used the "ordeals and odysseys" of Jews from both Old World shtetls and New World city streets to inform his stories.

"Jewish culture defined his work and he wasn't ashamed of that," said Sokol.

Sendak, whose parents traveled to the U.S. from Poland in the 1920s, was often sick as a child in Depression-era Brooklyn. His later writings and illustrations borrowed from his memories of childhood's dark corners and the way children can tap into their imaginations to escape those corners.

"It is always amazing to me that children survive childhood, that they go on to have professional careers and run countries," Sendak said at a talk at Washington University's Graham Chapel in 1989. "I think it's due to their tremendous courage. They have to be very brave. And that loyalty and courage and bravery is the subtext of everything I have ever written."

Sendak based the monsters in "Where the Wild Things Are" on his aunts and uncles that his parents had managed to bring to Brooklyn from the old country.

Final drawing for 'Where the Wild Things Are' - pen and ink, watercolor.

"I hated them all," he said at Graham Chapel. "They were grotesque, with their huge noses, their great cascades of hair, their bad teeth."

Early in his career as an illustrator, Sendak received commissions from Jewish organizations including B'nai B'rith and the United Synagogue Commission on Jewish Education. In 2010, according to The Wall Street Journal, Sendak gave $1 million to the Jewish Board of Family & Children's Services, a mental health and social service agency in New York, where his life partner of 50 years, Eugene Glynn, worked as a psychiatrist.

When he designed a series of pamphlets on anti-Semitism for the Anti-Defamation League early in his career, Sendak based the drawings on sketches he made of kids in his Bensonhurst neighborhood in the 1940s.

While Sendak's parents were able to bring his mother's family out of Poland, his father's family was wiped out by the Nazis. As a teenager, Sendak studied the black-and-white photographs of his murdered relatives.

Patrick Rodgers of the Rosenbach Museum & Library in Philadelphia, which houses the largest collection of Sendak's work, said the legacy of the Holocaust is "the biggest thing" in Sendak's work.

"His relationship to Judaism is a mostly secular one," Rodgers said. "He struggled growing up semi-kosher. He didn't do much in the way of worship. He couldn't relate to the world his family came from, but he became really aware of it when that world was falling apart."

As absorbed as Sendak was with his Jewish roots, his God was not Abraham's God. In 2003, he told Terry Gross, host of NPR's "Fresh Air," that religion "made no sense to me."

"You know who my gods are, who I believe in fervently?" Sendak asked. "Herman Melville, Emily Dickinson — she's probably the top — Mozart, Shakespeare, Keats. These are wonderful gods who have gotten me through the narrow straits of life."

Rodgers said Sendak's form of worship "was being an artist and trying, almost in a platonic way, to access other art that moved him deeply."

"Listening to Mozart while looking at Blake and transmogrifying them into what he did — that was his spiritual practice," he said. "That was where his soul was."