ST. CLAIR, Mo.  (RNS) The scene on Tuesday night (May 15) couldn't have been more American — teams from the local churches, decked in matching T-shirts, faced each other on the softball field as their fellow congregants cheered from the bleachers.

But in the last two weeks, this league of six church softball teams shrank to five when the pastors of three Baptist churches told one of the participating churches that their teams would no longer take the field against that church's team.

The problem was not pine tar or steroids, it was the sexual orientation of the new pastor of St. John United Church of Christ. 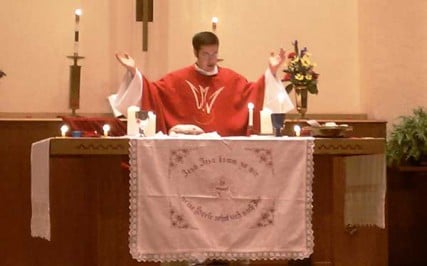 “Three congregations said they were uncomfortable playing our team because I am their pastor and I am an out bisexual person,” said the Rev. James Semmelroth Darnell, 27, “which is surprising because I don't even play.”

“It seems like my sexuality doesn't have anything to do with how my congregation plays softball,” Darnell said. “It's frustrating because this is who is representing Christianity in our community, and this is the message youths in our community are getting.”

Bethel Baptist Church in nearby Lonedell, Mo., is among the churches whose pastors didn't want to compete against the team from Darnell's church.

“We believe that God's word speaks clearly about boundaries, and that lifestyle is outside of those boundaries,” the Rev. Ben Kingston, Bethel Baptist's pastor, said Tuesday from behind the backstop.

Darnell, fresh out of Wesley Theological Seminary in Washington, came to St. John to replace its previous pastor in October, but it wasn't until two weeks ago that the Rev. Johnny Dover, pastor of Friendship Baptist Church and the league's commissioner, heard a rumor that Darnell was gay.

“I called their coach and asked if it was true,” Dover said.

Dover, Kingston, and the Rev. Wyatt Otten, pastor of Liberty Baptist Church, decided their teams could no longer play against a congregation that had deliberately called an openly bisexual man to be their pastor.

Darnell said his church quit the league after about 12 years of playing rather than ruin it for the rest. “We have an openly lesbian player, too, and that's never been an issue,” Darnell said.

Kingston and Dover said they didn't they know that St. John had been fielding a lesbian. And they said that they had never met Darnell.

“The sad thing of it is,” Dover said, “no matter how good or bad that team is playing, they are always having fun.”

Darnell said he had also felt some tension in the local ministerial alliance, a collection of pastors, but that the members there had decided to allow him to remain despite his sexual orientation.

“They decided they would benefit from an alternate viewpoint,” he said. 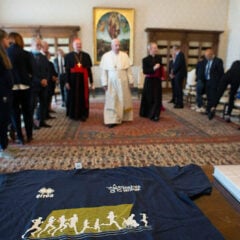 Faith
Pope Francis’ team joins up with star athletes like Ronaldo to say: ‘We all run together’ 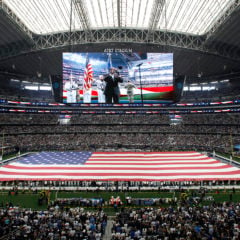