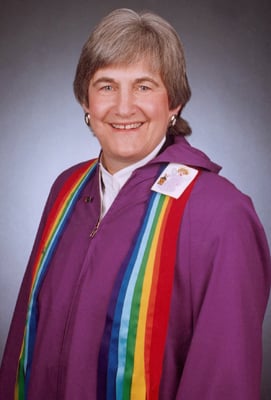 Religion News Service file photo courtesy of That All May Freely Serve
May 17, 2012
Daniel Burke

(RNS) In an unprecedented act of defiance, a California branch of the Presbyterian Church (USA) refused a ruling from a church court to rebuke a pastor who wed same-sex couples.

The Napa-based Presbytery of the Redwoods voted 74-18 on Tuesday (May 15) to instead praise the Rev. Janie Spahr, who wed 16 same-sex couples when gay marriage was legal in California in 2008. The Rev. Janie Spahr, a self-described ``lesbian evangelist,'' is facing trial in the Presbyterian Church (USA) for marrying same-sex couples in California in 2008, when gay marriage was legal.

“The 38-year ministry of the Rev. Dr. Jane Adams Spahr has been faithful to the Gospel of Jesus Christ, and to her calling,” the presbytery said.

“I was stunned by the kindness and the love,” Spahr said Thursday. “I’m so grateful to the presbytery.”

In 2010, the Redwood presbytery’s own court found Spahr guilty of breaking church rules by representing the ceremonies she conducted as marriages, and ordered the presbytery to publicly rebuke her. That decision was upheld by the PC(USA)’s top court in February.

But the Redwoods Presbytery rejected those rulings this week, saying that a public rebuke would “continue the harm” done to gays, lesbians transgender people and bisexuals “in the name of Jesus Christ.”

“The Presbytery of the Redwoods opposes imposition of the rebuke … as inconsistent with the Gospel of Jesus Christ, the Constitution of the Presbyterian Church (USA), and the faithful life of ministry lived out in this Presbytery,” the motion said.

The motion does not undo the rebuke, but emphasizes the presbytery’s rejection of the judicial rulings, said the Rev. Robert Conover, the presbytery's stated clerk, or chief church officer.

Laurie Griffith, manager of judicial process and social witness in the PC(USA), said she had never before seen a presbytery reject a ruling from its own court.

Last year, the PC(USA) voted to allow openly gay clergy. Gay and lesbian advocates will lobby to lift the ban on gay marriages at the PC(USA)’s General Assembly in July.