(RNS) Dozens of Catholic universities, dioceses and other institutions filed lawsuits in courts around the country on Monday (May 21) in a coordinated effort, spearheaded by the U.S. hierarchy and Catholic conservatives, to overturn the Obama administration’s contraception mandate plan.

The 43 plaintiffs, which include 13 dioceses and the University of Notre Dame, say the mandate forces religious employers to provide contraceptive and sterilization services to employees that violate their beliefs. They say that infringes on First Amendment religious freedom protections, and charge that the federal government’s exemption for religious organizations is too narrow.

“This filing is about the freedom of a religious organization to live its mission, and its significance goes well beyond any debate about contraceptives,” said Notre Dame's president, the Rev. John Jenkins, who famously awarded President Obama an honorary degree in 2009 despite anger from U.S. bishops.

The Obama administration and its allies, including some Catholic groups, reject those assertions and say a proposed compromise to the mandate effectively bypasses any entanglement in birth control coverage by faith-based groups.

An HHS spokeswoman told The Associated Press the department does not comment on pending litigation.

It was unclear whether the new lawsuits, which were filed in 12 different federal jurisdictions, would be heard anytime soon or whether they would have any legal impact on the controversial White House plan to have health insurers provide cost-free birth control coverage.

Legal experts noted that the U.S. Supreme Court is expected to rule next month on the constitutionality of the health care reform law, and could overturn all or parts of the 2010 law and render the latest lawsuits moot.

In addition, the part of the mandate that deals with religious groups does not go into effect for more than a year, and the Obama administration is currently processing feedback from Catholic groups – including many who filed lawsuits – on how to accommodate their concerns in the final regulation.

Dioceses and many of the groups that filed lawsuits will likely be exempt from the mandate, so the courts may not grant them standing as plaintiffs. One of the plaintiffs, Franciscan University of Steubenville, in Ohio, last week announced that it was dropping its health insurance coverage because the mandate would force it to violate Catholic teaching. But the university’s insurance policy indicates it is exempt from the mandate.

The Cleveland-based law firm Jones Day, which is representing the various Catholic groups in the lawsuits, declined to respond to specific questions about the suit, saying only that the firm “looks forward to presenting its clients’ cases in court.”

Jenkins said that the decision to file a lawsuit now, before the birth control policy goes into effect and before the mandate is finalized, was taken because the negotiations could take months, “making it impossible for us to plan for and implement any changes to our health plans by the government-mandated deadlines.”

The Rev. Frank Pavone, head of Priests for Life, an abortion opponent who filed suit against the contraception mandate in February, added that Monday’s mass filing could expedite a high court review that could settle the issue sooner rather than later.

“When there are multiple federal lawsuits on the same issue in different parts of the country, this can create the potential kind of conflict that the Supreme Court may be more likely to resolve,” Pavone said. 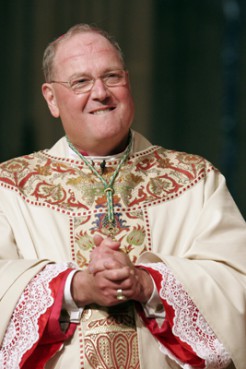 Archbishop Timothy M. Dolan smiles at his Mass of Installation as head of the Roman Catholic Archdiocese of New York at St. Patrick’s Cathedral in New York April 15 2009.

New York Cardinal Timothy Dolan, president of the U.S. Conference of Catholic Bishops, said the administration's insistence on continuing with the mandate left church leaders with little choice. The Archdiocese of New York was one of the plaintiffs that filed suit Monday.

“We have tried negotiation with the Administration and legislation with the Congress — and will keep at it — and there's still no fix,” Dolan said. “Time is running out, and our precious ministries and fundamental rights hang in the balance, so we have to resort to the courts now.”

Just 13 out of nearly 200 dioceses in the U.S. are party to the lawsuits. While the Washington-based U.S. Conference of Catholic Bishops is “facilitating and coordinating” the lawsuits, the hierarchy’s public policy arm itself has not joined in as a plaintiff.

“Our bases are covered (by these lawsuits). Our concerns are addressed. No need to pile on,” Sister Mary Ann Walsh, a USCCB spokesperson, explained.