(RNS) With the 2012 election less than six months away, congregations are getting the message that Americans want religion out of politics. But that doesn’t mean they plan to keep mum in the public square.

Instead, they’re revamping how congregations mobilize voters by focusing on a broader set of issues than in the past. Preachers are largely avoiding the political fray, and hot-button social issues are relegated to simmer in low-profile church study groups. 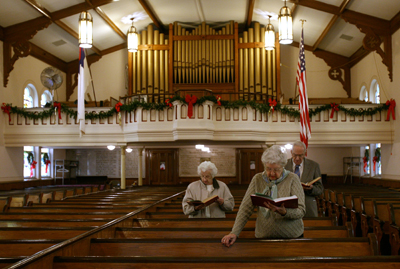 Members of St. Stephan’s United Church of Christ in Newark, N.J., worship on a
Sunday morning.

Why? For one, Americans are growing impatient with religious politicking: 54 percent want houses of worship to keep out of politics (up from 52 percent in 2008 and 43 percent in 1996), according to the Pew Forum on Religion & Public Life. Churches seem to be responding.

“The biggest change we see is a drop-off in the percentage of people saying they hear politics from the pulpit,” said David Campbell, a University of Notre Dame political scientist whose Faith Matters project tracked 3,100 people over five years.

“It’s been happening everywhere,” Campbell added. “People say they don’t want to hear about politics in church, and they’re actually hearing less of it.”

Still, that doesn't mean the public is clamoring for a totally secularized public square. Some believe the backlash is against a particular type of religious activism that aligns closely with one party’s agenda or set of candidates.

In April, PICO launched a national campaign to enlist congregations in registering low-income voters and championing multiple issues of “economic justice.” Missouri pastors are now leading efforts to cap payday lending rates at 36 percent. Minnesota clergy are rallying parishioners and others to oppose a new voter ID initiative, which they say would disenfranchise low-income residents and others who lack state-issued ID cards.

For religious conservatives, social issues still matter in 2012, but they’re not always being billed as top priorities.

Hispanic evangelicals, for instance, criticized President Obama earlier this month for supporting same-sex marriage and remain opposed to abortion on demand. But those concerns won’t trump the more pressing matter of immigration reform, which could lead to endorsements for Obama and Democrats running for Congress.

That’s according to Miguel Rivera, chairman of the board for the National Coalition of Latino Clergy and Christian Leaders, whose membership includes leaders from 16,000 churches.

“We are very happy with the outcome of the referendum (banning gay marriage) in North Carolina,” Rivera said. “But we hope our politicians will understand that this type of agenda is no longer acceptable if we want our country to unite again and work for the betterment of our communities.”

The National Association of Evangelicals plans to use soft-sell techniques in mobilizing its 45,000 churches to impact votes. Churches won’t receive candidate scorecards, which “are often thinly disguised partisan devices,” according to Galen Carey, NAE's vice president for government relations. Instead, they’ll be equipped with resources for studying what the Bible says about such issues as immigration and marriage.

“Churches are wary of becoming involved in a very partisan way, or campaigning on issues that might be controversial, because their mission is to reach their whole communities,” Carey said.

Religious involvement in partisan politics is driving Americans, especially those under 35, away from organized religion, according to Campbell. Some rising evangelical leaders see this young adult drift, documented in this year’s Millennial Values Survey, as a factor that makes nonpartisanship a practical necessity for churches seeking to grow and thrive.

“The last generation of Christians saw (the two major parties) as strategic allies in pushing their agendas,” said Jonathan Merritt, the 29-year-old evangelical author of “A Faith of Our Own: Following Jesus Beyond the Culture Wars.” “The next generation is reconsidering how that has blinded us and harmed us.”

Being nonpartisan is proving a tricky task in the political arena. Example: When Pastor Paul Slack of New Creation Church in Minneapolis makes a faith-based case against a voter ID initiative in Minnesota, he frames it as fighting against a GOP agenda.

“It’s politically motivated,” Slack said at an April press conference. “Voter ID is designed intentionally to make it harder for certain Minnesotans to vote. … We need to get more people at the polls so they can take part in sharing the common life together because that is indeed a value of our faith.”

Come October, however, all bets for nonpartisanship will be off, at least in churches participating in Pulpit Freedom Sunday. The Alliance Defense Fund is urging pastors to preach Oct. 7 on political issues and endorse specific candidates in defiance of Internal Revenue Service codes for tax-exempt institutions.  More than 250 pastors have already signed up, including Ron Johnson Jr., senior pastor of Living Stones Church in Crown Point, Ind.

Churchgoers “have the opportunity to vote with their feet,” said Johnson, who preached in 2008 on why voting for Obama would be immoral. He’s now running for state representative.
“If they don’t like the messaging, then they don’t have to worship in our congregation.”

News
Presbyterian Church in America votes to leave National Association of Evangelicals
Follow us on Facebook!
Submit your photos to RNS