ST. LOUIS (RNS) When Adil Imdad's 28-year-old cousin died of cancer in Ohio two years ago, the family's grief was compounded by the absence of Muslim ritual following her death. There was no imam nearby to handle the religious customs, no Muslim funeral director to supervise the washing of the body, no Muslim cemetery where the family could lay her to rest.

Imdad, an environmental and geotechnical engineer in St. Louis, also was disturbed by the funeral costs. He found that many Muslim families — oftentimes newly arrived immigrants and refugees — couldn't afford the $5,000 and $7,000 for burial services. 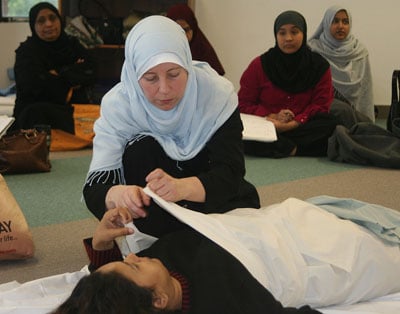 Deidre “Nusaybah” Ritchie demonstrates how to wrap and prepare Muslim bodies for burial at a conference in Herndon, Va. Ritchie is a volunteer who helps families prepare bodies for burial in accordance with Islamic law.

So he began taking night classes at St. Louis Community College, graduating last spring with a certificate of specialization in funeral directing. As Imdad awaits his state licensing exam, he is trying to raise money for what he says will be the state's first Muslim funeral home.

“The community is growing, and things are going well for Muslims in St. Louis now,” Adil said. “But this is one area where we are way behind.”

Muslim communities in Kansas City, Columbia and Jefferson City maintain small funeral facilities, often inside mosques, for washing bodies of the deceased. But until now, many Muslims buried their loved ones in Muslim sections of Christian cemeteries, relying largely on non-Muslims to guide them through the process of death.

As the Muslim population of the U.S. has grown — the number of mosques grew 74 percent in the last 10 years, according to a 2011 survey — so has the need for Muslim-specific services like funeral homes and cemeteries.

Jay Hardy, the owner of Jay B. Smith Funeral Homes in Maplewood, Mo., and Fenton, Mo., said that in the 1970s, he handled one or two Muslim burials a year. Today that number is up to three or four each week, he said.

One reason for the jump, Hardy said, was the influx of Bosnian Muslims to the area in the 1990s. Last August, the Bosnian Islamic Center bought a large plot of land in a local cemetery, making it the first Muslim cemetery in St. Louis, said Imam Enver Kunic.

Burial fees in other cemeteries, “were too high,” Kunic said. “We had to do this for us.”

Gary Laderman, an expert in American funeral traditions at Emory University in Atlanta, said that in the latter half of the 19th century, just as the funeral industry was taking shape after the Civil War, American Jews began to build their own branch of the business.

“It was about how they could control their own dead and ensure they were buried according to their ideals and expectations,” said Laderman. “And more recently we've seen other communities producing their own funeral directors, producing their own professionals or volunteers, who are increasingly involved in the disposition of their dead.”

Hardy acknowledged that logistical problems exist when a non-Muslim funeral home handles a Muslim funeral. Islam and Judaism share many ritual elements in the preparation and interment process. Embalming, for instance, is forbidden. And bodies should be buried before sunset on the day the person died, or at least within 24 hours.

The timing often creates scheduling problems for funeral homes that are not dedicated specifically to Muslims or Jews. “More times than not, (interment in 24 hours) doesn't work out,” Hardy said.

Most of the work of preparing a Muslim body for burial is traditionally done by the family. The body is washed in a prescribed way, then wrapped in pieces of white cotton cloth, called kafan. People who handle the body, including those who lower it into the grave, also should wash in a particular way.

Other restrictions about how a body is placed in the ground are sometimes at odds with public health laws, and there can be logistical problems with timing, for instance, if a cemetery is not prepared to open a grave at 6 p.m. on the day of death.

Mufti Asif Umar, a local imam, said keeping costs down for families was also at the heart of his support for Imdad's Muslim funeral home idea. The average adult funeral, before the cost of burial, was $6,550 in 2009, according to the most recent numbers from the National Funeral Directors Association.

“We have a lot of needy in our community, people who can't afford burial fees,” Umar said. His mosque's burial fund, which members can tap into if they need help with funeral costs, is one of its most important collections, he said.

Mohammed Hussein, a radiation oncologist from Washington, D.C., thinks practicing the correct religious rituals surrounding death should be a priority for American Muslim communities. In his spare time, he is a funeral director and has served as something of a mentor to Imdad and recently donated a hearse to his future funeral home.

In Muslim countries, death and burial are “treated as a purely religious affair,” Hussein said. In the U.S., when someone invests in mortuary school and various other funeral-related degrees, certificates and licenses, “naturally, they want to make a living of it.”

But much of what a mortuary student studies — subjects like embalming and body restoration — is irrelevant to Muslim funerals (open caskets, too, are barred in Islam).

Imdad said that aside from small expenses for materials like soap and cotton shrouds, his funeral services will be free for the community. He estimates that with a deal he has arranged with the new Bosnian cemetery, he'll be able to cut the total cost of preparation, funeral and burial down to less than $2,000.

After months of studying such Muslim funeral texts as “Funerals: Regulations & Exhortations” and “A Brief Summary About the People's Violations in Funerals,” Imdad said he is ready to help ease people's burdens during a trying time in their lives.

“Helping people satisfies something inside you,” he said. “When they pray for you later, you know it comes from their inner heart.”