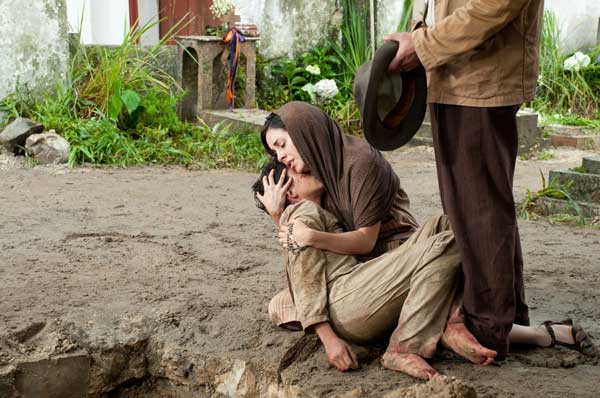 (RNS) The film shows a burning crucifix, gun-toting priests and the torture of a young boy. And the Roman Catholic hierarchy is loving it. The film, “For Greater Glory,” hits theaters on June 1 and tells a little known chapter of Mexican history -- the Cristero War of 1926 to 1929, which pitted an army of devout Catholic rebels (led in the movie by Andy Garcia) against the government of Mexican President Plutarco Calles (played by Ruben Blades).

For Catholics enraged by the Obama administration’s proposed contraception mandate, the film about the Mexican church's fight in 1920s is a heartening and timely cinematic boost in the American church's battle to preserve "religious freedom" in 2012.

For other Catholics and non-Catholics, the film is, more simply, action, suspense and a good cast. Besides Garcia and Blades, there’s "Desperate Housewives" star Eva Longoria and the legendary actor Peter O’Toole.

Endorsements for the film from Catholic leaders explicitly connect it to the current clash between church and state. 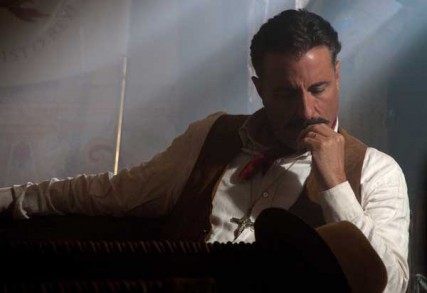 Andy Garcia in a scene from "For Greater Glory" - U.S. Catholic leaders say this new film about a Catholic civil war in 1920s Mexico has important lessons for U.S. Catholics in 2012, and they're hoping ``For Greater Glory'' will help rally the faithful around their bid to defend ``religious freedom.''

“'For Greater Glory' is ‘must-see’ viewing for all those who care about faith and liberty today,” wrote Carl A. Anderson, the Supreme Knight of the Knights of Columbus, which put the film on the cover of its members' magazine.

“It is a top-flight production whose message of the importance of religious freedom has particular resonance for us today,” added Los Angeles Archbishop Jose Gomez.

Mexican real estate developer Pablo Jose Barroso, the devout Catholic who produced the film, was asked by the National Catholic Register if the film's release -- coinciding with the current activism on religious freedom -- was "God's timing.”

“This is the perfect time for this film,” he said.

Barroso, who has produced other faith-based films, lamented that the official onslaught against the Catholic Church in Mexico, and the Cristero rebellion, is little known even in Mexico. State law shuttered churches and curtailed the administration of the sacraments. Anti-Catholic fervor led to the deportation and murder of priests.

But other Catholics, including some of the film's stars, express varying levels of comfort with drawing parallels between the Cristero War and the Catholic hierarchy's call to preserve "religious freedom" in the U.S. today. 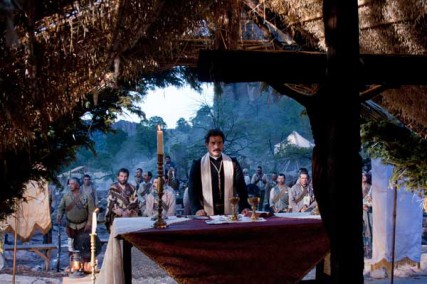 “The movie was not done as a piece of propaganda,” Garcia said in an interview, stressing that he didn’t want to be drawn into a discussion about how some might be using the film. “I am not in the political arena.”

While the U.S. Conference of Catholic Bishops is working hard to stop the Obama administration's birth control mandate, their campaign has not attracted a broad base of Catholics. A March study by the Public Religion Research Institute found that most American Catholics are generally supportive of the mandate. And 57 percent of Catholics (and 56 percent of Americans in general) reject the idea that religious liberty is under siege in the U.S.

For the Cuban-born Garcia, “For Greater Glory” is about religious freedom, but ultimately about freedom generally. While filming in Mexico, Garcia said he had his own history to draw on, given the suppression of the church in Cuba. “It was not only the taking away of religious rights," he said. "They curtailed and took away all rights.”

He had not heard of the Cristero War before he worked on the film. But neither had many of the Mexicans in the cast, including Eduardo Verastegui, who plays a lawyer who spoke and wrote boldly in support of the Cristeros.

“In public school they didn’t teach that,” said Verastegui, 38. A decade ago, he grew serious about the Catholicism in which he was raised, and has became an activist against abortion and same-sex marriage.

Verastegui told Religion News Service that he has no interest in likening the Cristeros' fight in the 1920s to the bishops’ call for a campaign for religious rights. The bishops' conference has designated June 21 to July 4 as a “Fortnight for Freedom,” to be observed in dioceses across the nation.

“I try to stay away from politics,” Verastegui said. “I’m trying to allow my art to speak for itself.”

(In a subsequent interview with conservative cnsnews.com, Verastegui compared Obama to one of history's most famous oppressors of Catholics, King Henry VIII.)

For the Rev. Jim McDermott, a Jesuit priest in Los Angeles and occasional screenwriter, connecting the Cristero War with modern-day politics makes little sense, from either a Catholic or artistic perspective.

“As much as I personally find some of Obama's policies problematic, it seems ridiculous to compare that issue with the wholesale demolition of the Catholic Church in Mexico depicted in 'For Greater Glory,'" he said.

“The attempt to equate these two situations,” he continued, “strikes me as indicative of the deeper problem our church faces today, the fierce and often willful bolstering of animosities at the expense of our national community.”

Besides, he added, “As a writer, I think sermons are best left for the pulpit.”